Review - A sequel that comes 14 years after its predecessor, The Incredibles 2 was worth the wait, with a take on the now-ubiquitous superhero flick that focuses largely on family dynamics and social norms.

Most sequels suffer from comparison with the hit that made it inevitable, but Marvel boss Kevin Feige’s only rivals when it comes to can’t-fail spectaculars are the wizards of Pixar.

The animation giants seem incapable of making a bad movie, and this year they produced two successful ones – one for each holiday: the Oscar-winning Coco, followed by the hit sequel to 2004’s The Incredibles.

When the original came out in 2004, superheroes weren't nearly as thick on the ground as they are now. The appeal was seeing a family of superheroes trying to make it in a hostile world.

Unlike most super-hero movies, the point of The Incredibles - and its belated sequel Incredibles 2 - is the family dynamic, rather than the super-powers and super-villains.

Incredibles 2 picks up immediately after the first film (you can do that with animation) and the arrival of the dreaded "Underminer".

There's a chase, there's a lot of damage. For the good of the city, the supers are shut down, for good.

Or is it for good? An eccentric billionaire, Winston Deavour, seems keen to bring them back.

Win (Bob Odenkirk) and his glamorous sister Evelyn (it's a good week for Catherine Keener fans) are sure the problem is simply perception. So they'll give the supers a soft re-introduction - starting with Elastigirl.

Clearly this is going to cause some rearrangement of the home, with the lunkish Mr Incredible being handed Solo Parent duties for the first time. Can he cope, even in the luxurious new home that goes with the new job?

Predictably, dad finds himself snowed under with unfamiliar tasks.

Violet's first date is a disaster, and she blames everyone.

Dash has his own problems with maths and then there's the added problems of Jack-Jack, who's started to explore his new powers.

In other words, like the first Incredibles, this film is a metaphor for family life - and a thoroughly entertaining one too. 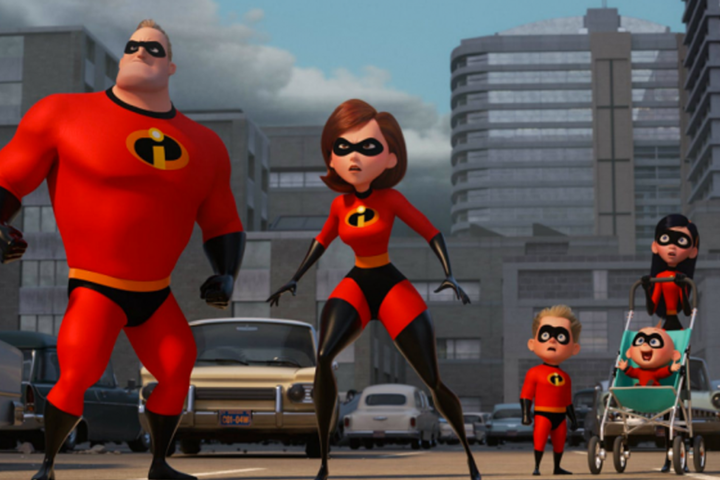 Mum has to re-acquaint herself with the workplace, and is torn between loving her new freedom and guilt over the family's plight without her.

Meanwhile dad is in severe need of sleep. He summons his best friend Frozone to help, but not even Samuel L. Jackson can deal with the dimension-hopping powers of Baby Incredible.

In the end, dad brings in the big guns - the miniscule figure of costumier to the superheroes Edna Mode, the funniest character in the first film, and equally so here.

Edna's voiced by writer-director Brad Bird himself, who, unlike most Pixar creatives, seems to prefer to work solo.

Of course, the Pixar machine is so well-oiled these days, it's impossible for an outsider to tell who does what there.

Suffice to say, a Pixar movie is one of the very few guarantees in the movie industry, and Incredibles 2 is no exception. The visual pleasures are so dazzling it's often easy to overlook how grounded they are too.

At a time when superhero movies are getting bigger and bigger, but often thinner and thinner at the same time, Incredibles 2 succeeds by keeping it small and domestic.

These days the working mum and the stay-at-home dad are hardly unusual, and kids are under new pressures, personified by a new super-villain for our times.

The names of the villains are irresistible - Screen Slaver, The Underminer, and my favourite, Reflux (you don't want to know what his powers are).

At the end, it all comes out right, and satisfyingly so.

Maybe there's a lesson in this - don't do a sequel until you've thought up a good one. It took Brad Bird 14 years to dream up Chapter 2 of The Incredibles, but it was worth the wait.

The other alternative, of course, is to make up something new.

Who's going to put money into something as hare-brained as that?