When a French film has a title like C'est la vie - or Oo la la, or Zut alors for that matter - it doesn't fill you with confidence. As it happens, the original title was the rather less easily translated Le sens de la fete, which I think means something like "the party spirit", though I might be wrong.

But it doesn't matter. Whatever the title, it's the smartest, funniest film I've seen for ages.

C'est la vie is the work of writer-directors Olivier Nakache and Eric Toledano, who made the delightful The Intouchables and Samba, though it's nothing like either of them. 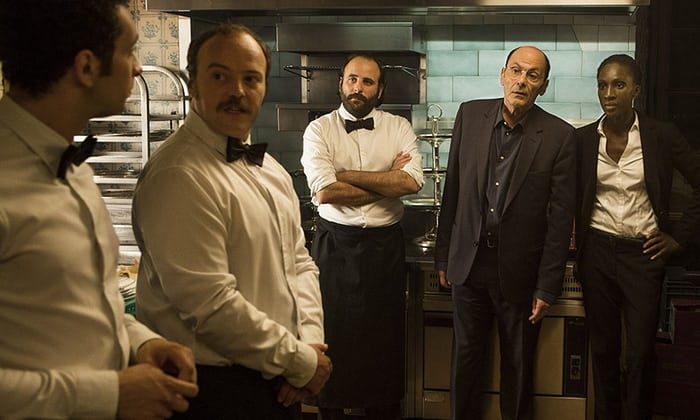 It takes place at a big, fancy wedding, being held at a stately home outside Paris. And the organizer of the wedding is Max.

Max, played by the wonderful Jean-Pierre Bacri, treats each wedding as a campaign. His team of cooks, waiters, musicians, photographers - even balloonists - have to live up to his exacting standards.

Even if everyone knows that something can go wrong at any moment.

First Max has to deal with his volatile deputy Adele, who's capable of losing her temper at the slightest pretext. Adele's secretly hired a friend as a fill-in waiter, despite him not knowing a champagne flute from a wooden recorder.

Mind you, Max can hardly complain. His own best friend is that walking disaster, Guy the photographer.

Then there's Max's clinically depressed brother-in-law, who distinguishes himself by hitting on the bride. There's a waiter who's training to be a conjuror and another part-timer who by day is a policeman - and yes, he's heard every "pork" joke you can come up with.

And loudest of all, there's the wedding singer, James - a man with no filter, a short fuse and a habit of warming up at the worst possible moment.

The worst moment is when the pompous client is laying down the law to Max about what he wants. He wants "sober, chic and elegant".

Needless to say, he doesn't get any of those, but he - and we - get something better. C'est la vie may have all the hall-marks of a well-designed French farce, with every scene, every line, designed for maximum comic effect.

But it's not remotely clinical or contrived. Its riches are in its wealth of characters.

This is a surprise because the talented film-makers Nakache and Toledano haven't shown any particular interest in multi-character comedy in their previous work.

So their skill at juggling so many great characters - every one of whom gets at least one moment to shine, often more - is quite unexpected.

Every setup gets paid off in spades - whether it's the client's paranoia about the remote possibility of the staff waving serviettes at him, or Max's problems with the "auto-correct" on his phone whenever he texts people.

There's something about the big event food-movie - that combination of high tension, volatile characters and gorgeous-looking dishes - that's hard to resist. I think of The big night, Dinner rush and Ratatouille.

And C'est la vie has revived the genre triumphantly.

Will Max get through the night without having a nervous breakdown? Will he sell up and take a less stressful job?

Can Guy the photographer find love, will Adele keep her temper, and can rocker James learn a Maurice Chevalier song to keep the oldies happy?

And above all - in the face of power cuts, scratchy wigs, a runaway balloon and a mercy dash to the Champs Elysees - will the wedding go ahead?

As the amused Pakistani dishwashers say to each other, those French, they're something else…

The greatest compliment I can give C'est la vie is that it's even better than the entertaining trailer - and it's been a while since I said that!

When a film not only matches but exceeds your expectations, maybe there's hope for the movies after all. And in a week's time we hope to prove it, as we preview the upcoming 2018 International Film Festival.