Everything about Ocean's Eight is thoroughly predictable, though this may be how its audience likes it.   The title tells you it’s a sequel of sorts to the successful Ocean’s Eleven, Twelve and Thirteen films.

The poster tells you that, unlike its predecessors – including the very first one starring Frank Sinatra’s Rat Pack – this film is all about women, and mostly women movie stars. 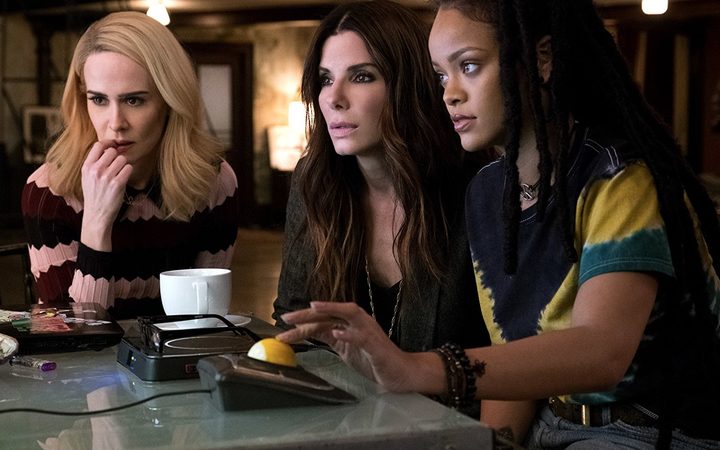 And playing her cool blonde side-kick – the Brad Pitt part – is Cate Blanchett.

Now before we start counting down Debbie Ocean’s Eight or so, I have to confess I’m not a huge fan of heist films.   They’re always the same plot.

We meet the boss – the man with the plan – then he (or in this case, she) puts together a gang.

Call them the Four Horsemen, the Magnificent Seven, or in this case Ocean’s Eight.  The casting call is usually the most entertaining part of the film.

The gang always starts well before invariably something goes wrong.  There’s a lot of improvising and panicking and near misses before success is plucked from the jaws of defeat.

And then, because there’s no way you can just have one, there’s another switcheroo, followed by…

…Well mostly followed by me yelling out – stop with the switches already!  Is no-one capable of telling a simple, linear robbery story?

Or if you must have a surprise ending, can you please limit yourself to one at the end?

Needless to say, Ocean’s 8 - written and directed by the usually able Gary Ross - sticks pretty close to the rules, though to someone’s credit, the storyline and attractive cast are clearly skewed to a female perspective.

The heist isn’t directed at a Frank Sinatra/James Bond Casino, but the most famous event on the fashion calendar – New York’s Met Ball.

Fashion rules the plot too.  Debbie Ocean has a fashion queen in her sights – played by Anne Hathaway – and needs to persuade her to wear the world’s most valuable jewels.

Enter fading fashionista Helena Bonham-Carter, having a lovely time as always, and as always, the most enjoyable thing in the film.

The cast is lively and appealing – always excluding a late appearance by James Cordon who usually sets my teeth on edge for some reason – but the problem, as always, is the tricksy plot.  That and frankly the amount of money at stake.

The more money in the robbery, the worse the movie, I’ve always found.

It’s a heist movie, like all the rest of them – but one interesting thing...  The cinema was packed – and not just women.

Ocean’s 8 may not be exactly what audiences are looking for but it’s certainly the sort of film they want – glamorous, entertaining and funny.  So watch that space.