Unlike the other Marvel movies, Deadpool is R-rated and proud of it.  Not just R-rated but a sarcastic swipe at every comic-book movie on the market.

The common phrase when talking about the two Deadpool movies so far is “breaking the fourth wall” - meaning our hero, Wade Wilson (Ryan Reynolds), talks incessantly to the camera throughout.

Not just that, but the whole tenor of the latest Deadpool – simply called Deadpool 2 – is a series of winks at the audience, and an assumption that, while the modern blockbuster audience may not know much about history, geography or literature, they do know an awful lot about comic-books and comic-book movies.

The character of Wade Wilson – rendered indestructible after one of those convenient chemistry-set accidents – has the potential to be terminally irritating.

But he’s also undeniably funny – Reynolds plays him half early Jim Carrey, half modern-day Ryan Gosling with a little twist of his own.

The format is clever too.  While our hero takes the mickey, everyone else has to play it straight – Wade Wilson’s appealing girl-friend Vanessa, his irritated fellow X Men, Colossus and Negasonic Teenage Warhead and, carrying the plot this time, Josh Brolin and Hunt for the Wilderpeople star Julian Dennison.

Wait, what? Isn’t Josh Brolin already on Marvel super-villain duty, playing the gigantic Thanos in the new Avengers blockbuster?   Well yes he is.   And it’s not as if anyone’s hiding this information, least of all Ryan Reynolds.

The other surprise is adorable Kiwi teenager Julian Dennison who plays Firefist, better known in the orphanage where he’s been brought up as “Russell”. 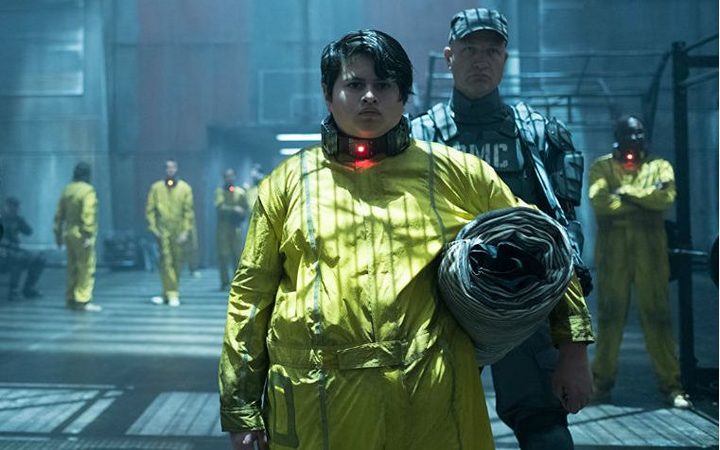 Dennison, incidentally, makes no attempt to disguise his Kiwi origins, or indeed his essential Ricky Baker-ness in this film.

So the plot, if anyone asks you, is that Josh Brolin’s character Cable arrives from the future to kill Ricky Baker – I mean Russell – before he one day turns into a fire-fisted killer.   Getting his retaliation in early, you might say.

But Wade Wilson – aka Deadpool – has become family-minded after his anarchic first movie. He wants to save the kid from Thanos, I mean Josh Brolin, I mean Cable.  And so he puts together a team – a sort of rival set of X Men.

By now whatever happens is as unimportant as the actual plot of a Marx Brothers movie.  The script seems to be mostly a commentary on the original story, with as many gags attached to it as Ryan Reynolds can squeeze into the running time.

The good news it is funny - for the first half at any rate - with the audience kept on its toes waiting for the next reference to Marvel Comics, Marvel movies, other movies or Ryan Reynolds’ previous rather patchy career.

Deadpool 2 frankly has all the self-discipline of a late-night talk show – and almost as many unexpected cameos.

Matt Damon turns up, as does Brad Pitt, and most of the current cast of X Men, though you blink and you’ll miss them.

Ryan Reynolds carries the film of course, but the straighter actors – Josh Brolin, Julian Dennison and Zazie Beetz as the lucky Domino – are the main reason for non comics-obsessives to watch it.

But for popular culture freaks – bored after six viewings of Ready Player One – this is clearly the film for you.

I know this because the four guys behind me kept loudly pointing out what was going on and which movies were being referenced.  With any luck, they’ll be behind you as well when you get to see Deadpool 2.