Sweet Country is an engrossing and unpredictable story of a runaway aboriginal couple, based on events in 1920s Australia.

For a country with not the best reputation for its treatment of indigenous people, Australia has made a lot of films on the subject - from Rabbit Proof Fence and Beneath Clouds to the heartbreaking Samson and Delilah and the charming The Sapphires.

Director of Samson and Delilah, and cinematographer on The Sapphires, Warwick Thornton’s new film is the acclaimed Sweet Country.

Thornton has taken a true story from his long-time sound-man David Tranter – a story told to him by his grandfather.

But the mark of a great film-maker isn’t what you’re given, it’s what you do with it.  And Thornton has made an Australian western that stands up with the best of Sam Peckinpah.

It’s the early 1920s in Central Australia, and the men who fought in World War I have returned home and been given land to farm.

Most of them know very little about farming so people like the clearly damaged Harry March ask for help from their neighbor, the devout Fred Smith, played for maximum sympathy by Sam Neill.

Fred is an anomaly in that part of Australia and considered eccentric in the extreme because he treats indigenous workers like Sam Kelly and wife Lizzy as friends and colleagues, not slaves.

Reluctantly Sam, Lizzy and Sam’s young niece Lucy help Harry set up his farm.  But they, and we, expect the worse.

Harry can’t seem to function without a bottle of rum in his hand and his behavior turns from obnoxious to dangerous.

Sam takes the women away from Harry, who angrily takes on another, younger worker, but then chains him to a rock as a prisoner.

When the boy escapes, Harry blames Sam and Lizzy, and he runs to their place clutching a gun. 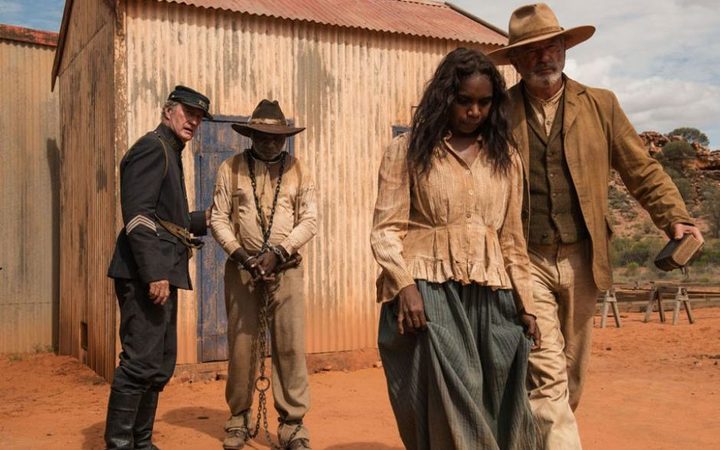 In the end it’s Harry who gets shot, and Sam and Lizzy take off across the desert, knowing that a dead white man won’t be tolerated.

Least of all by police sergeant Fletcher, played by leathery Bryan Brown.  Fletcher forms a posse of locals – white and black.

The flat lands, the faces, the white anger and the black stoicism – and above all the searing heat – all combine to tell a brilliant story that twists and turns in often surprising ways.

But the performances he gets are effortlessly true – from the mostly first-timers playing the indigenous characters, and from old pros Sam Neill and Bryan Brown.

I’ve never seen either of them better than they are in Sweet Country.

Most of all, Sweet Country is cunning story-telling, particularly when it compares real-life Australia with how Australia likes to think of itself.

There’s an obvious, but still telling, collision between two Kellys – a silent film glorifying bushwacker Ned Kelly, and the fugitive Sam Kelly, on the run for a crime he didn’t commit.

But it’s a movie, not a lesson, and it’s as engrossing throughout its length as it is unpredictable and heartbreaking at the end.

It wowed the audiences at the Venice Film Festival, and I’m certain it will do the same with audiences here.  Heartily recommended, it goes without saying.