Review - A Wrinkle in Time

A Wrinkle in Time combines a popular American children’s book with Oprah Winfrey and the landscape around Wanaka.

In A Wrinkle in Time, filmed around Wanaka, delinquent schoolgirl Meg (Storm Reid) has never been the same since her father vanished. She and younger brother Charles Wallace (Deric McCabe), get bullied at school, possibly because of their interest in time and space.

It seems Dad has cracked the Fifth Dimension and then vanished up his own plot device.

Or did he?  Enter a mysterious, mystical woman called Mrs Whatsit (Reese Witherspoon), dressed like a Christmas cake, and running the risk of wearing out her welcome with old vaudeville routines about Mrs Whatsit, Mrs Who and Mrs Which.

Belatedly, leading “wise woman” Mrs Which – get it? – Oprah Winfrey arrives with Mrs Who, and they explain more stuff to our bewildered trio.

And under the Fifth Dimension,  A Wrinkle in Time is mostly made up of dollops of The Wizard of Oz, with occasional side orders of The Neverending Story.

Fantasy stories are notoriously tricky things to pull off, particularly when the story-teller is new to the game.

Director Ava Duvernay’s background is mostly documentaries, though she took a slight detour when she made the Martin Luther King drama Selma.

I don’t think Duvernay’s got a fantasy bone in her body, though she gamely goes from chapter to chapter of A Wrinkle in Time hoping the performances, or the newly racially-diverse characters might bring something to the party.

The story’s events and whiplash changes of tone pretty much re-define the word “random”.  What’s the point of the Stepford Wives?  Why does one of the three magical beings turn into a flying daffodil? 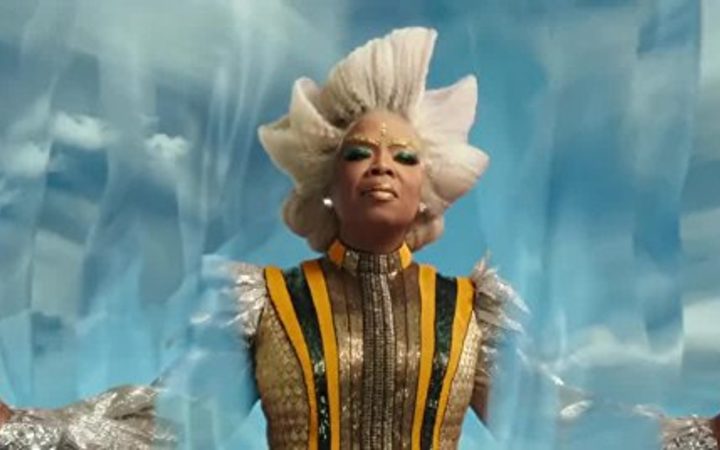 Oprah Winfrey in A Wrinkle in Time Photo: Disney

And fatally, the villain of the piece isn’t a simple Wicked Witch of the West but something far less clearly defined - it’s The Nothing of The NeverEnding Story .

As any fantasy fan could tell you, it’s impossible to get excited when the villain is as impersonal as this.

I can understand there are a lot of reasons to make A Wrinkle in Time.  Just not very convincing ones to go and see it. It’s a story of a multi-racial group of kids whisked off to a new, if rather wobbly, dimension.  And it’s based on a book that as required reading at many US schools is well known there.

A Wrinkle in Time has been made by a keen group of people, actively encouraged to offer an Afro-American slant, whatever that is.  And it gives Oprah Winfrey the chance to dress up in something that looks like a pile of laundry. At the end of a grumpy two hours at the cinema it felt like too much time spent at a movie with altogether too many wrinkles.