Rampage pits The Rock against corrupt science, with the help of a genetically enhanced gorilla.

Dwayne Johnson – The Rock – is pretty much the last brand-name star whose mere presence can guarantee an audience.

The former wrestler of part Samoan heritage who makes Arnold Schwarzenegger look puny has a work ethic that would shame just about everyone in the business.

Since launching his acting career in The Mummy Returns (2001) he’s made over 80 films – some good, some bad, but mostly hugely entertaining.

Funny and self-deprecating, The Rock never makes the mistake of being any smarter than his audience.  Like stars before him - John Wayne, Errol Flynn, and the young Harrison Ford – he makes just one promise to his fans.  You’re going to have a pretty good time.

Rampage is made by the producers of a previous Rock hit, San Andreas, and in the end suffers from the same fault - no pun intended - the simple inability to say “when”.

But the film opens as well as anyone could wish. We meet gargantuan primatologist Davis Okoye (The Rock) who works mostly with gorillas, such as his best friend George (Jason Liles).

What Davis and George don’t know is that a space station run by some pesky, meddling scientists has blown up, and three of its main components have landed around the United States.

One of them is in the middle of George’s gorilla enclosure, and suddenly there’s considerably more of him; he’s doubled in size, and he’s still growing. 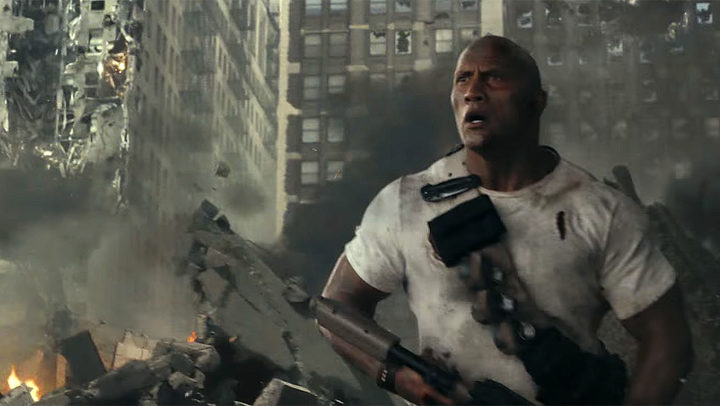 Maverick genetic scientist Dr Kate Caldwell (Naomie Harris) has no sooner started explaining that George is the victim of genetic editing than he heads for the hills.

But Davis isn’t giving up on George, and nor it seems is the CIA, represented by the jovial Jeffrey Dean Morgan – one of the few actors who can go head to head with The Rock.

Davis and Caldwell take off in a plane with George, and when the gorilla’s anaesthetic wears off we’ve suddenly got a furious King Kong ricocheting inside. Defying gravity and logic, somehow everyone lands more or less intact.

Then Jeffrey Dean Morgan drops the next bombshell. The result of the second bit of space junk is not just a gigantic wolf, it’s a wolf with bits of other animals edited on by the special effects boffins. These guys are having a wonderful time getting oversized creatures to smash up the city of Chicago.

But the creators of Rampage  haven’t stopped yet. Remember there was a third radioactive fragment? This is the moment when Rampage jumps the crocodile and starts to capsize under the weight of its special effects gimmicks.

It’s a pity because the appeal of the film – though the producers clearly don’t know it – is mostly down to the likeable performances by The Rock, Naomie Harris and if you like, Jason Liles, the performance-capture actor behind George the gorilla.

Rampage will be very successful, I’m sure, even if it does work far too hard hitting us over the head with its stunts and ridiculously big monsters.  But honestly guys, you had me when The Rock attempted to take off in a stolen helicopter and then forgot how to drive it.