Dan Slevin (filling in for Simon Morris) reviews 25 April - an animated version of New Zealand's Gallipoli story - and Meryl Streep portraying the "worst singer in the world", Florence Foster Jenkins. He also chats to the co-director of the Documentary Edge Film Festival, Dan Shanan about the trials and tribulations of running such a specialised event. 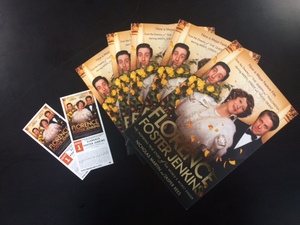 Thanks to Entertainment One, local distributors for Florence Foster Jenkins, we have five double passes plus five copies of the biography of the diva by Nicholas Martin and Jasper Rees.

Email widescreen@radionz.co.nz to go into the draw.

In 25 April director Leanne Pooley uses vivid and colourful animation to tell the story of the Anzacs at Gallipoli.

Meryl Streep uses all of her considerable charisma and technique to portray Florence Foster Jenkins – a society hostess and philanthropist known as “the worst singer in the world” (although not to her face).