Community Builders in Ōtara busier than ever

Ōtara Kai Village is on a fundraising drive this month to help keep up the hard work they're doing for their community during Auckland's lockdown.

Terangi Parima from the Community Builders NZ Trust (which oversees Ōtara Kai Village and some other Ōtara-based charities) tells Jesse Mulligan about their "whare-enhancing" kaupapa. 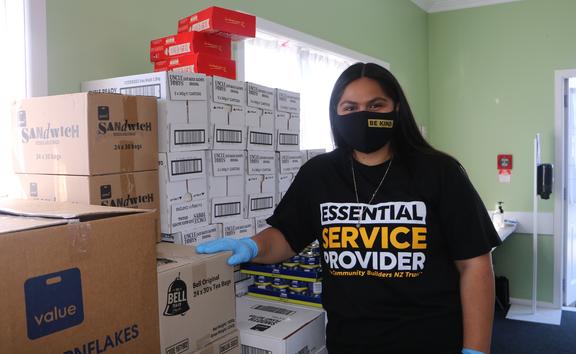 "We are distributing kai and the way that we see it is that if a family doesn't have to worry about going to shop and spending 100 dollars on groceries… they have that flexibility of maybe being able to pay 100 dollars on their power bill."

She has lived in Ōtara most of her life and knows the struggle of the one-income family under financial pressure.

"If [people have] lost their job, it's really hard right now to get one and to get the financial support that you might need to proceed with your life as per normal."

Ōtara Kai Village is not a registered food bank because that term carries a lot of stigmas, she says.

Part of their "whare-enhancing" strategy is a commitment to not shaming people asking for help.

"Mentally and emotionally, it makes a huge difference if you've got [the type of support we provide] and you know the providers in your area.

Last week, Terangi received a written thank you letter from a pregnant woman with an out-of-work partner who is living with her in-laws.

Ōtara Kai Village has never done a callout for funding before but the current situation in South Auckland means they need help to support their community, she says.