New Zealand's longest running soap opera, Shortland Street, was met with much disappointment from audiences when it first aired in 1992.

But the show has since managed to win people over to remain a staple on television. 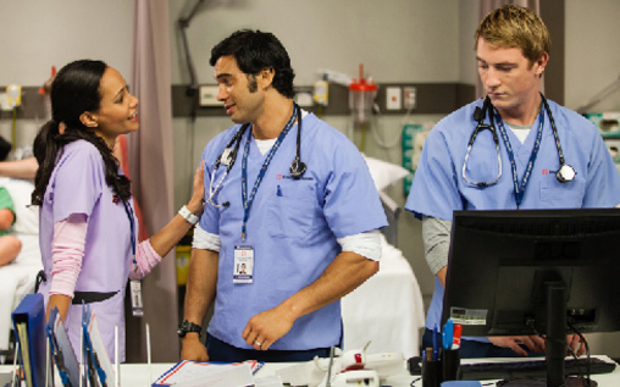 A scene from the Shortland Street TV series. Photo: TVNZ

Three themes were initially put forward for the concept - a medical drama, a police drama and a family drama, Bailey says.

TVNZ was keen on a medical drama, he says, and even just the idea of doing five episodes a week was pretty revolutionary for New Zealand TV at the time.

"South Pacific television also did a soap opera, which I was one of the directors of, which we did two episodes of and that seemed like a challenge in 1978.

"So it was a huge step forward to be talking about doing five a week. I can remember Carmen's eyes when we talked about how many we had to do."

After a call from the producer to join the show, Leonard got an interview with Bailey where he warned her the pay wasn't great.

But it was actually three times more than her minimum wage earning up to that point, she says, and she jumped onboard right away.

Still, it proved tough to be filming at an unprecedented level, she says.

"None of us knew in the early days how it was going to work. It was really, really tough, but so fun, because it was new, and we were all making something different that we'd never made before."

Originally, it was going to be shot at TVNZ's Shortland Street studios - with the loading dock as the ambulance bay - but when that proved to not be practical, they switched to a studio lot in Browns Bay, Bailey says.

Both Bailey and Leonard remember clearly how the audience reacted to the first episode.

"I think New Zealanders are afraid to see themselves on TV, and Shortland Street was sort of that cross section of people that made audiences take a long look at themselves. It was completely and utterly panned, they absolutely hated it," Leonard says.

"We'd all worked so hard and we were all so proud, and it was really devastating to hear that," she says.

"People didn't actually realise it was a relationship drama at that stage, there was criticisms from people in the profession who said it's not actually real and of course it wasn't real," Bailey says.

"Although it has done incredibly well with [talking about] issues over the years as well, so that's been a strong backbone to the show too."

Michael Galvin, who has played Dr Chris Warner throughout the show, says the cultural cringe to hear our accent on TV was real and upset people in the first episode.

"We'd only been getting positive feedback from TVNZ about the show.

"[When it came out], it was just universally panned. I don't think there was one positive review, I certainly can't remember [any].

"The first chunk [of the show] had enormous ratings, which everyone was tuning in to see the show because it had a lot of publicity... Then of course the second and third segments of the show, the ratings just dived."

But he says it was became instrumental in getting people used to hearing our own voice and stories on the screen.

"Also, the fact that it's always there has provided an amazing foundation for the TV industry generally ... whereas previously it's all seasonal.

"Certainly for actors I remember ... your vision of your career was very murky it was like 'well I guess I'll mainly do theatre and if I'm lucky I'll get the odd TV here and there', but post Shortland Street, I think a lot of young actors can see that there are people making an okay living at least for a period time as an actor."

The show went on to host almost every actor in Aotearoa and included plots of abduction, affairs, fires, bombs, car crashes and devastating diagnoses.

Bailey says the cliff hangers were an essential part of building up the storyline and getting people to tune in for another week.

"The resources over the years went hugely into making sure those Christmas [cliff hangers] were big.

"I just marvel at how they actually do it. It's quite structured in terms of how it goes. There are a number of people involved at any part of that process because that planning happens quite a long way out.

"Every six months, there might be a six-month planning session as to where things might go and the network is heavily involved in that of course, that would involve where characters are going, major storylines heading to perhaps what's going to happen at Christmas time."

Bailey says the show has proved to be invaluable.

"It's really hard to imagine TV2 without Shortland Street where it is at the moment, it would be a completely different channel than it is now and that's been like that for 30 years."