Andrew Sullivan: Out on a limb

Criticised for abandoning the right and for being critical of the left, writer Andrew Sullivan is considered to be one of the most influential journalists of the past 30 years.

He has gathered 30 years of his essays that track some of the most contentious topics in recent American history for his new book, Out On A Limb: Selected Writing, 1989-2021. 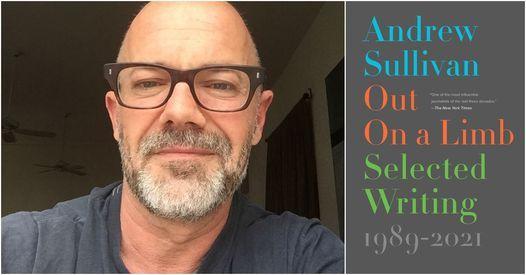 Sullivan made headlines last year when he left New York Magazine, refusing to go along with what he calls their ‘woke’ agenda.

He says his resignation gave him a "sudden rush of fame" in which he felt people were quick to judge him.

"I thought the best response to that is not to try and argue against them on Twitter, but actually just to put out the collection of my pieces for the last 30 years ... [to] try and confound some of the misinterpretations or deliberate misreadings of work I've done."

Sullivan says it's clear to see he's not alone in his thoughts because his newsletter The Weekly Dish on Substack draws in more than 100,000 readers every week.

But he still faces backlash on social media, which he says is being used as a tool to acquire mobs that shut down the free exchange of ideas and enforce psychological coercion.

"We should be seeking out views we don't agree with because they might contain truths we have not considered.

Sullivan says it's part our tribal instincts as humans to demonise views that don't conform to our group of beliefs, but it's not in line with liberal thinking.

"What we've seen right now in the American response to the Covid pandemic is that even when people's very health and life is at stake, they would rather stick with the tribe and risk death then violate the tribal command."

The fact that people were deciding on the vaccine based on their tribal affiliation showed how "truly sick" the United States is politically, he says.

But he says the same also goes for the Democrats when they refused to accept Trump's legitimacy as president and believed he could only have been put there by Russia.

"These are crazy irrational tribal feelings. They're not reality. And they can take us over very quickly, especially if they're wrapped around things like race and gender ... and we lose the capacity to live with one another without seeing each other as anything more than representatives of these entities."

The divisions between forces - like Trump supporters and leftists or between the countryside and cities - has made it hard for writers to agree with different viewpoints, he says.

"You're not really allowed to say 'okay, I take your point, but I also take that point', or I share some of that view or not, or be anywhere in the middle.

"The forces of those tribal instincts make it very hard for a writer to stand his or her ground anywhere apart from as cheerleader for those tribes.

"And that's what I've been trying to do for most of my career actually, it just turns out that this has been a particularly acute period of polarisation."

There's also a growing sense of moral purification - that certain views should be punished - and racial understanding is instead turning into racial obsession, he says.

"I'm an old school liberal in the sense I believe that we are equal citizens, we deserve equality of opportunity, but a fair and free society does not mandate equality of outcomes either between individuals or between groups."

He clarifies he has always been a supporter of equal opportunities and "formal legal equality for everybody" and acknowledges that racism has a dark history in the US.

"Where I differ is in saying that that is not the only or the core definition of the United States, but it is a part of it.

"Also a part of it is the overcoming of that, I mean the country had a bloody civil war to defeat slavery. Hundreds of thousands of white people died to end it in the 19th century.

"So what I would say is if you reduce America simply to being a racist country or an allegedly white supremacy, you're completely missing whole other aspects of it."

But Sullivan isn't afraid to admit he has got it wrong sometimes - for example, when he defended the Iraq war because he believed he was "on the side of good".

"You can run away from those things, you can pretend you never supported this thing which has turned out so badly, or you can just say, well, I've just got to account for it.

"When 9/11 happened ... I think that trauma distorted our minds, distorted our psyches and there was such evil that we felt we had to have a commensurate amount of righteousness. [It was] dumb, dumb, dumb.

"We should have let reality teach us instead. We thought we could bend the world to our reality and as always, in those cases - almost always - [there's] catastrophe.

"I'm supposed to be the one that says history tells us this won't work, that culture matters, that history matters. You can't turn Iraq into a democracy overnight or even within a matter of decades in the Western sense."

On the other hand, he says that America's sense of righteousness is a mixed blessing because it was also what helped defeat totalitarianism in Europe in the past.