The power of words: Cody Keenan on writing for President Obama

After 12 years and 3577 speeches, Cody Keenan wrapped up his job as the former chief speechwriter for former US president Barack Obama.

Keenan helped the president find the right words to explain, to heal and to remind America of its unique story and potential.

He's writing a memoir about his time at the White House, called Grace: A President, His Speechwriter, and Ten Days in the Battle for America. 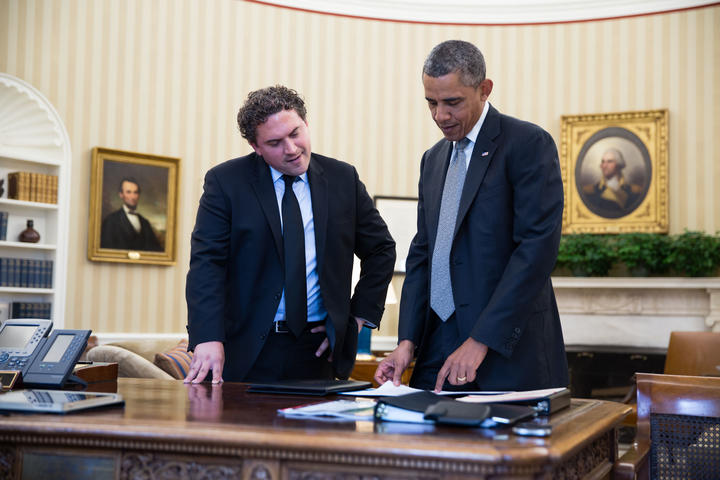 While working as a mailroom intern at Ted Kennedy's office, Keenan got into speech writing.

"It's not sexy walk and talks, working in that mailroom, opening letters from people who would share some pretty personal stories," Keenan tells Jesse Mulligan.

"Sometimes they didn't even have requests, they just wanted somebody on the other end to know what was going on in their lives and hopefully to give a damn about it.

"And Senator Kennedy had the most accomplished staff on the hill, and I just got to learn a ton from them."

Keenan, who left Obama's service this year, remembers seeing him go from being anonymous to a mega star after a speech to the Democratic National Convention in 2004.

"[Obama] gets up there and talks about politics the way I wanted it to be, as this kind of big, frustrating messy, but ultimately hopeful and rewarding endeavor where ... if you can make people's lives just a little bit better, answer some of those letters that are always in my mind, then you're doing something right.

"He knew every word of that speech inside and out before he took the stage and not just from memorising it, because he actually wrote it and worked on it and that's an important component to speech writing too.

"Any speech is better if the person who's speaking takes the time to work on it, to be an editor, to leave feedback, to get to the point where if you do it like Barack Obama. But when he would get up to give a big speech, we had it down to the syllable that he wanted."

One of the greatest qualities in speech writing is walking in your audience's shoes and reflecting on their hopes and dreams, he says.

"It can be a tough thing for a speechwriter ... I've been thinking a lot about all the different worlds that you have to inhabit as a speech writer and as a world leader, and is it fair to tell other people's stories, how do you inhabit those worlds?"

It was something that made Keenan feel at a loss when tasked with writing a speech for Obama after a white supremacist murdered nine Black parishioners in South Carolina in 2015, he says.

"I remember the draft I gave him after staying up basically for two nights in a row, he left the first half of it largely intact, but the second half ... he'd just drawn one giant line through the final two pages and he handed me the legal pad, where he'd rewritten it, and I told him I'm sorry.

"Sometimes it was just hard to write about an issue like race, especially when you're feeling like I was that, you know, who am I to write this and he stopped me there.

"He showed a little bit of grace, which was the theme of the eulogy, and he put his hand on my shoulder and he said 'first of all, brother, don't apologise, you gave me what I needed, when you read through this, you'll see that it largely follows what you had'."

Ultimately, they produced one of their best collaborations, he says.

"He basically crossed out everything after I'd written the words Amazing Grace and he took that as a structural element for the rest of the speech.

"What he did was remarkable and just took it to a place that I couldn't reach ... That was one of the more extreme examples of him having to throw himself into his speech."

And it's no coincidence, he says, that his daughter is now named Grace, who was born during a time the country faced division along with the ongoing pandemic.

Another time Keenan has seen the power of empathy is during one of Jacinda Ardern's earlier speeches when she addressed children in the face of the pandemic, he says.

"For a politician, I was stunned by it, and I thought it was remarkable and a refreshingly empathetic thing to do, not necessarily just for those kids, but for all New Zealanders.

Keenan is now a partner at Fenway Strategies, a communications firm, and he's a visiting professor at Northwestern University.

"One of the most rewarding things in my life has been watching my students go on to get jobs writing for governors and mayors and on presidential campaigns.

"And hopefully I can seed American democracy with a bunch of young idealists who share that same belief that we can make things better."