The second series of the hit cooking show Pacific Island Food Revolution - in which teams from Pacific countries cook traditional dishes with local ingredients - is now streaming on TVNZ OnDemand and Māori TV.

Chef Robert Oliver - who created the show - hopes the New Zealand government feels proud of their investment in Pacific Island Food Revolution because it's having a real impact on "making village food cool again" in Pacific countries. 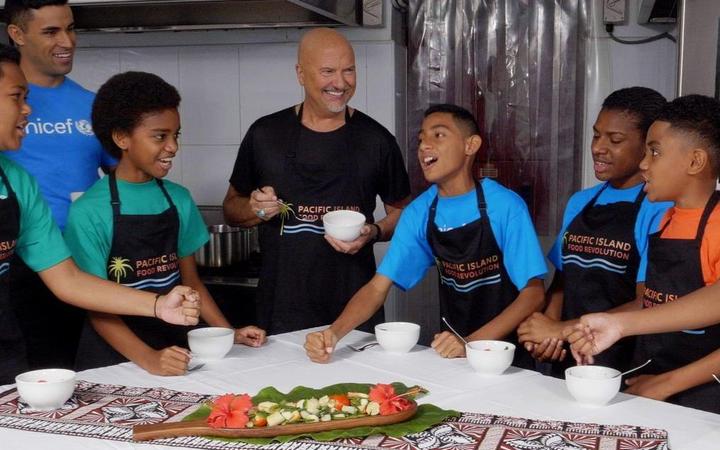 "New Zealand has a very meaningful relationship with the Pacific Islands and I'm super grateful to [the Ministry of Foreign Affairs & Trade] for supporting us thus far."

Oliver grew up in Fiji on wholesome local food, and after working on the TV cooking show My Kitchen Rules wanted to harness the power of that format to address the NCD (non-communicable disease) crisis in the Pacific.

The most common NCD is diabetes - a condition that usually stems from an unhealthy diet, Oliver tells Jesse Mulligan.

It turns out a fun, friendly international cooking show is the answer.

As Pacific Island Food Revolution is supported by both the New Zealand and Australian governments, the show's producers have to provide evidence of the impact it is having.

They commissioned the Busara Center for Behavioural Economics to measure the show's influence in Fiji, Tonga, Vanuatu, and Samoa.

"In Tonga, people who've watched the show are 262 percent more likely than those who have not to choose local healthy food. In Samoa, it's 146 percent. These are staggering numbers."