How sound changes your experience of wine

Jo Burzynska is a wine writer, musician and multisensory artist who has just graduated with an unusual PhD.

Her research has examined the effects of sound and music on the sensory, emotional and aesthetic perception of wine. 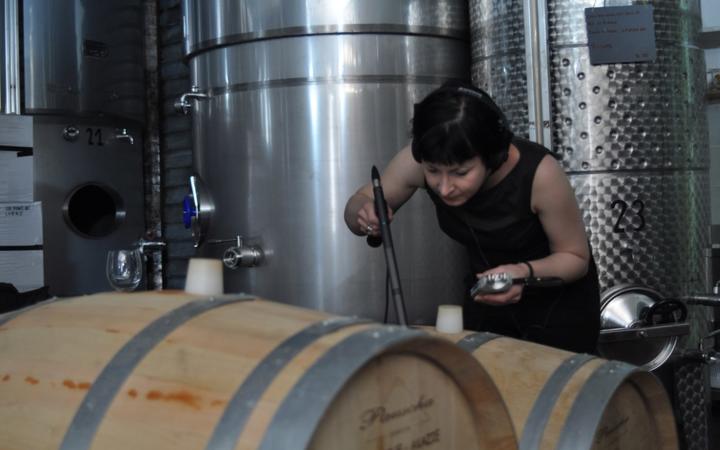 “I had an inkling that they might be interacting with each other, but I thought that was just me because I was heavily engaged with both of them.”

Eventually, she says, advances in psychology and neuroscience seemed to suggest that what was happening to her as she was listening to music while having a glass of wine was a wider phenomenon.

In 2014, she established the first wine and sound bar in Christchurch, curating a wine list that worked with the music playlist of the bar. It was also a sonic arts gallery, so wine was paired with the art in each exhibition.

“At a certain point it suddenly felt like it was becoming a really big, serious project and I thought that actually, maybe it’s time to turn this into a PhD and that’s how it all kicked off.”

She says she was keen to find out what specific sonic and music properties influence wine characters.

“Throughout the whole project I made works, the sound works were exploring the creative application and use to test things out on the group of participants who I got feedback from.

“There had already been an association between high pitch and acidity or sour flavours, which had been found in other studies, and I managed to replicate this with wine. I made a sweet and sour soundscape which was designed to emphasise sweetness in the wine.”

Sweet music is softer and smoother, she says.

“For me I put some richer low tones in but there are studies which also suggest that higher pitches [are sweet] so high and low but softer, rich sounds.”

For pinot noir, a low frequency tone significantly increased the perception of body and altered the intensity of its aromas, she says.

“If you want to increase the body of your pinot noir, which you might not want to, it being a pinot noir and being quite nice normally as a lighter bodied wine, should you want to you might want to put on some more bassy music.”

You can’t magic a flavour character in the wine that isn’t there by using music, she says, but if it has sweetness, it can really draw things out.

“It’s about drawing attention to these characters in a win when you’re drinking them.”

Our brain creates shortcuts for sensory things we encounter in daily life, Burzynska says, but why there’s a link between wine and sound, that’s not known.

“What I can tell you is that you can definitely change people’s perception of what they’re tasting and smelling by what they’re listening to when they’re consuming a food and drink.”