The drama behind the Russian space race

"Off we go" proclaimed Soviet cosmonaut Yuri Gagarin 60 years ago this month as he thundered away from the Earth becoming the first person to journey into outer space.

The bold move from the Soviet Union trumped the United States’ space programme as Gagarin orbited earth and returned in a near catastrophic landing.

Film director Stephen Walker reveals the drama behind one of humanity's greatest adventures in his new book, Beyond: The Astonishing Story of the First Human to Leave Our Planet and Journey into Space. 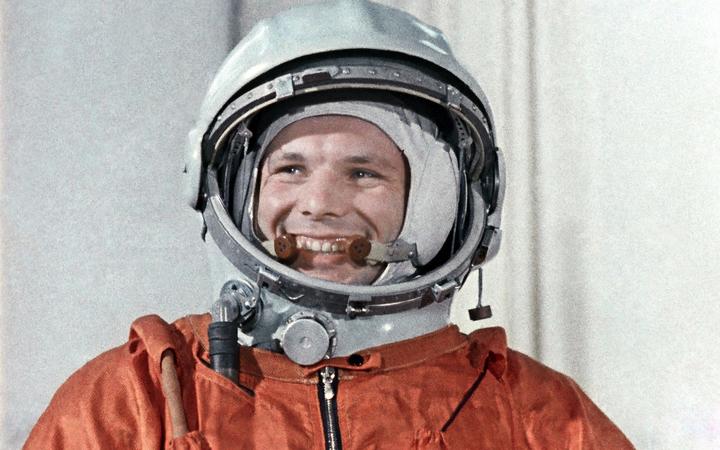 He tells Jesse Mulligan he grew up in the 1970s and was very excited by space as a child.

“I loved that fact that we had sent men to the Moon and all those sorts of things even at a time it was beginning to die. The drama of it really captured my imagination.”

His previous book focussed on the atomic bomb and Walker says it’s interesting that the Soviet Union and United States were locked in both an arms and a space race. One inspired fear and caused horrific pain and damage, and the other inspired hope.

“This story is the exact opposite. It’s also about cutting edge technology a few years later and it’s utterly exhilarating. What it’s about, finally, is this incredible idea that for 3.5 billion years all life on this planet has stuck to the biosphere and this man, Yuri Gagarin, is the first living organism to escape.

“There’s something about that idea that’s incredibly compelling. We talk about how dramatic it is going to the Moon and, of course, it was dramatic when it happened in 1969. But what Yuri Gagarin did, this young 27-year-old ex-foundry worker, father of two children, loyal Soviet citizen, a guy with a great smile, took this unbelievable risk and, in doing so, escaped the cave and looked down on our planet in a way that no one had ever seen before.”

Walker says that before Neil Armstrong and company came along and eclipsed Gagarin’s feat, there was a real feeling that the first man to go into space was destined for immortality.

“The competition was incredible. There was competition, obviously, with the Americans with seven astronauts trying to get into space and there were 20 Soviets and the competition between them literally got to boiling point. The decision between which one of those 20 would be the one to take that leap into the beyond was only made three days before the flight.”

The Soviet advantage was in due part to the fact that they had bigger nuclear warheads which they could convert into space rockets and because, in America where things were more open and publicised, they were frightened of having an American citizen blown to smithereens on live television.

“They had to be more careful. The Soviets were much more secret, and their launches were always conducted in secrecy and they only revealed the reality of what was happening if the launches were successful, otherwise they were hushed up.”

Soviet successes in space came much to the chagrin of the United States who had Americans under the illusion that it was so technologically backward they were incapable of making a working refrigerator. Not only did Yuri Gagarin become the first man in space, in the 1950s the Soviets were the first country to get a satellite, Sputnik 1, into space.

“Here they were putting the first satellite into space. Now, we’re used to the idea of satellites. But if you are a real kind of red-hating, communist-hating, red-blooded American in 1957 and the Soviets are sending a bleeping satellite over your backyard every 90 minutes, not only have you suffered a tremendous, humiliating technical and political humiliation but, on top of all that, there’s a real fear that the next thing the Russians will be doing is dropping bombs from it.

Sputnik 1 started such a wave of panic in America that commentators in 1957 were saying that, by the 1970s, America will be a state in the Soviet Union. US Senator Henry Jackson even proposed a National Week of Shame and Danger in the United States after news of the launch.

“They had to catch up. They had to find a way to catch up and the only thing they could think of at that point, because the Soviets were doing so well with their enormous rockets, was to think about putting a human in space – not a robot, not an animal – a human being.

“That was the incentive towards the creation of NASA [1958] and, as a result of all that, we get this Project Mercury Programme which is the American space programme.”

Seven astronauts were selected who soon became rock stars in America despite having not manned a flight yet. All the while, the Soviets were watching with a keen interest.

“They picked their 20 men and did the whole things in total secrecy. In such secrecy in fact that even these Soviet men that were selected were not allowed to tell their families what they were doing and what they were training for.”

However, the Soviets weren’t immune to slipping up and, at one point, sent part of one of their rockets to a technology exhibition in Mexico.

“It’s got all the bits taken out, and it’s only a bit of a rocket, but it’s enough of a bit of a rocket for a bunch of CIA agents in Mexico City to basically break into the museum, get hold of this thing, and it’s taken away to a hidden compound where they take it apart, photograph it, test it for fuel residue to see what kind of fuel is being used. They then put the whole thing back together again and put it back inside the museum.

“That’s how they find out something of the raw, awesome power of these incredible rockets and missiles that the Soviets are punching up into space.”

When John F Kennedy became President in 1961, there were fears that the American space programme would be abandoned. Kennedy didn’t care for space, was concerned about the money being spent, and thought it was too high risk for the astronauts.

“What actually happens is that, because Yuri Gagarin gets into space and beats the Americans by just three weeks – after a two or three year build up, it came down to the wire – at that point, Kennedy is looking and thinking, what do we do.

“On the same day there’s a massive party for Yuri Gagarin, the biggest party in Moscow’s entire history, in Washington DC there’s a meeting and, in this meeting, Kennedy says, what can we do? Somebody tell me, what can we do? That’s where the idea of going to the Moon starts to become a reality.”

Thus, Kennedy went from being reluctant about the space programme to insisting the America would be going to the Moon that decade.

“All of it comes down to that two or three weeks in which Yuri Gagarin had beat the Americans to be first in space. It would not have happened otherwise, I don’t think.”