Everything changed with Stuart Watson stopped talking and started listening. As an investigative reporter, he spent his career talking to people.

It took recovering from alcoholism, coming to terms with adoption and meeting his birth family for him to realize he wasn't really hearing what women had to say.

He now hosts a podcast called ManListening featuring conversations with strong women who've bounced back from adversity and  a new book, What She Said, What I Heard: How One Man Shut Up and Started Listening. 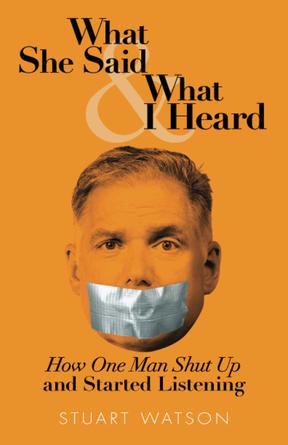 Watson begins the book by recounting how a colleague slapped him across the face after he made a rude comment. He tells Jesse Mulligan that, in the 30 years since, workplaces have changed dramatically and while he’s still the same person, he hopes he wouldn’t make the same comment today.

“I think a lot of us have just had to wake the hell up. In some ways I’m still the same selfish guy who doesn’t consider others, but in a lot of other ways I hope I’ve changed. For one thing, I have three daughters and that tends to open your eyes a good bit.”

It wasn’t that slap, or even getting fired from his job, that made Watson change his ways. It was when he did a personality test where the results said he was an empathic listener and told his wife of 40 years.

“She said, sweetheart, you are not an empathic listener. She was very emphatic. So, I began interviewing women on tape for the sole purpose of proving her wrong and showing her how great I was. I listened back to it and transcribed it and was appalled at how terrible a listener I was.

“The proof was on the tape where I actually saw how many times I interrupted or mansplained or argued or just cut people off mid-sentence and I was doing it with women more than I would do it with another man.”

The idea for a memoir was partly rooted in how he used his investigative reporting skills to find his birth mother and reunite with her.

“Thank God I did because 15 years later she’s now in a hospice and she and I have had a wonderful relationship. She is one of the women I needed to hear from.

“The question was, how do you tell this story. Do I simply tell it chronologically, do I deal with my journalism career, how do I write a memoir. And I ultimately thought, if I talk about all the interactions I’ve had with my three daughters, with my wife, with my adopted mum who I dearly loved before she passed, with my birth mother, with my adopted sister, and biological sister – that would be a window into these really formative influences I’ve had in these three generations, mother, wife, sisters, and then my daughters.”

Watson says that when he met his biological mother he told her that he forgave her.

“She just kind of laughed and said, oh honey, you don’t have the power to do that.”

He explains that his mother is a deeply religious woman and believed it was up to a higher power for her to atone and be forgiven.

“I think in large part because we could look each other in the eye and tell each other the truth right from the moment of meeting, it cemented this relationship that’s been so strong and wonderful.”

Watson says he discovered that his biological father was an alcoholic and it became apparent to him, when he was 34, that he was too.

“I had a couple of little girls at home and a successful career, I didn’t have a history of getting arrested – my father got arrested repeatedly, he was a terrible criminal – but on his death certificate it said he died of acute alcoholism. It’s right there on the death certificate signed by a doctor, it’s not some speculative or imagined condition. It was fatal in his case.

“In my instance, I was sick and tired of being sick and tired, of living life either drunk, blacked out, passed out, or hungover. It’s really no kind of way to live, feeling a constant sort of sickness and realising it was just going to get worse and worse and worse. That realisation came before I even knew that this was a genetic disorder.”

However, he doesn’t blame the biological link entirely for his own relationship with alcohol and says it was a part of his own moral corruption and selfishness that drove him both to drink and impacted his relationship with women.

“I was completely self-centred. I didn’t care what it did to anybody else including the woman who I pledged my life to, my wife, and so it’s such a relief to be able to own my part. I can’t own the genetics, I didn’t make me, I didn’t make my genes the way they are, but I can control certain things. I can seek treatment, I can seek 12-step groups, I can seek out people to try and help me own what is my part and let go of what is not my part.

“The single thing that the treatment of women; the mansplaining, the misogyny, whatever you want to call it, and the alcohol use had in common was my own megalomania, arrogance, or straight up ego.”

For anyone striving to be a better listener, Watson has a bit of advice:

“A lot of it is a straight up technique, but nothing displays respect more than actually listening to someone. Nothing is a greater sign of respect and nothing is greater sign of contempt than refusing to listen someone, to turn your back or walk away or look out the window.”