The Economist's Tom Standage on the World in 2021

The year is starting like the last one ended, with uncertainty about the vaccine rollout, how President Elect Biden will handle everything on his plate and whether economic vitality will return.

Every year The Economist magazine looks at the trends to watch in the coming year.

Editor of World in 2021,Tom Standage, told Jesse Mulligan that, after a turbulent 2020, this year is likely to return to a more even keel. 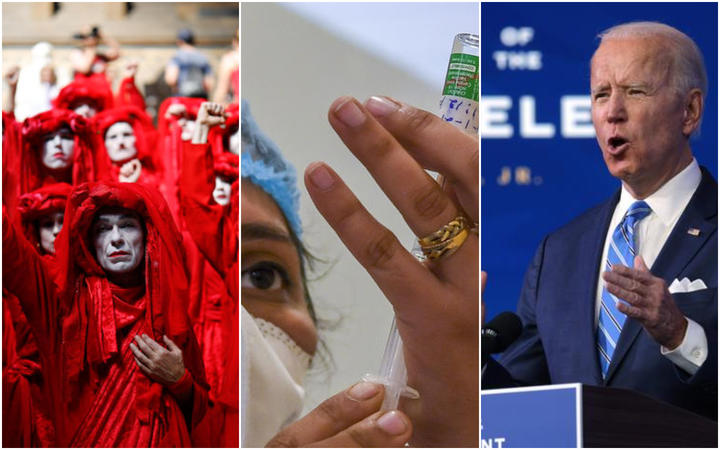 “I think the general trend is going to be instability but also heading back towards some sort of normality,” he says.

He believes we wont be out of the woods with Covid until towards the end of this year.

“It’s going to take longer than people think, so the biggest most important trend is what happens with the virus and with the vaccines.”

The logistical pressures over the vaccine roll out make some governments’ predictions, such as the UK Conservative government, that things will return to normal by Easter overly optimistic, he says.

In geo-politics Joe Biden is likely to quickly undo some of the decisions made under Donald Trump, he says.

“The pre-Trump, pre-Covid world is gone, we can’t go back to it. Joe Biden’s going to do the best he can to try and restore faith among America’s allies.

“He’s going to do all the things that America used to be trusted to do and take leadership in all sorts of areas, but that’s going to take time. He’s going to be able to reverse some things quite quickly - going back into the Paris Agreement for example, and back into the WHO, but other things like re-booting the Iran nuclear deal are going take longer and may not be possible at all.”

Unease among allies towards the US will remain for some time, he says.

“In the mid-terms, in 2024, we might get Trump or a Trumpy person coming back again.

“We are going to see a lot of wariness from American allies, they want to think this is a return to a saner way of doing things, but we can’t be sure.”

The true state of the global economy is difficult to accurately assess, Standage says, with equity markets currently completely de-coupled from the real economy.

Stock markets are having a bob each way, Standage says. If economic data is positive it’s good news, if the figures look bleak then government stimulus is seen as an inevitable consequence and so this is also a positive.

“When the pandemic ends we are going to see the full extent of the damage and it is going to be much worse than it is now.”

Government interventions such as furlough schemes are disguising the true economic picture, he says.

“There’s a veil that’s covering up the true impact of the pandemic economically and only when that veil is withdrawn will we really be able to see what the true damage has been.”

One possible benefit of the pandemic is that policy makers might be more open to warnings about other threats, Standage says.

Some countries war-gamed the impact this might have, and Asian countries, scarred by SARS, were better prepared than most.

But it was not the case that we were not warned about a pandemic.

“People have been talking about this is a when, not if scenario for many years.

“What this means is, if you are someone who is worried about something else that is a foreseeable risk, and is a kind of when not if problem, then you’ve got a window of opportunity to get on the phone to policy makers and say this is something else that could side swipe us.”

Such threats include antibiotic resistance, nuclear proliferation, bio-terrorism and even asteroid risks he says.

However this new openness to risk management could be short-lived.

“What tends to happen is people worry about things and when the thing they worry about hasn’t happened for a few years they go why are we paying insurance on that and they give up.”

Climate change is one area for some optimism in 2021, he believes – and not because of the pandemic causing a downward blip in emissions.

‘The total emissions produced last year only fell by about eight percent globally.

“And the problem is we’ve been emitting carbon dioxide for 250 years and most of it is still in the atmosphere, so even if you cut your emissions for one year by eight percent, that doesn’t really move the needle.

“We need to move our emissions to zero, which means you get rid of all of them and then we need to start taking carbon dioxide out of the atmosphere, and that’s going to take another century or so.”

“If you look at the European stimulus plan or Joe Biden’s stimulus plan, they have a very, very large green component.

“Joe Biden says when he thinks of climate he thinks of well-paid union jobs, so he is spinning climate change as a job creation scheme, and rightly so.”

The EU has similar green stimulus plans in the pipeline, he says.

And then there is the COP26 climate conference in Glasgow at the end of the year where countries are obliged to give their emission pledges.

“If you add up those pledges now they are nowhere near enough to meet the goals of the Paris Agreement.

“The big news is China has said it is aiming to be carbon neutral by 2060, it is the biggest emitter in the world so that should put pressure on other countries to raise their game and come up with more daring pledges.”

Eyes will be on India, another large emitter, to see what it pledges, he says.

“So, 2021 could come to be seen as the year where we really turn a corner on climate change and people start to take it much more seriously.”