Dr Hannah Korrel - How to break up with friends

Breaking up is hard to do. But sometimes breaking up with a toxic friend is even harder than ending a romantic relationship, says neuropsychologist Dr Hannah Korrel.

She says too often we put up with behavior from friends we would never tolerate from anyone else. She gives her best advice on when and how to let go in her new book, How To Break Up With Friends. 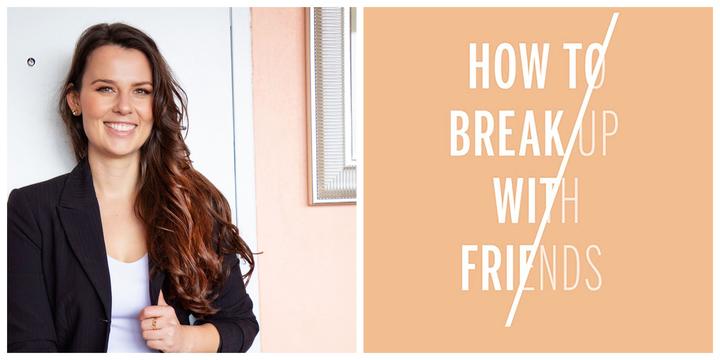 She tells Jesse Mulligan making friends and maintaining friendships is an art of living with integrity and being able to speak truth. However, circumstances can dictate how easy or not this can be.

Living in the same city or area all your life gives most people a social advance regarding friendships, she says.

“There’s this old adage that you can be too old to make friends and it’s kind of half true, but it’s kind of not true.

“It’s tricky, if you’ve lived in the same place all your life then you do get really long-term friendships… you’re more likely to have interconnections in your friendship groups and your friends know each other, as opposed to you being the only person who knows that friend and then this other friend. You end up having a much stronger social network.”

Many people move away and live elsewhere, making it harder to foster those deeper connections with friends, as we don’t spend enough time getting to know people in the way we did while at school or university. People shouldn't be complacent and believe making friends after a certain age isn't that important, or too hard.

“However, it’s really important we don’t fall into that trap of thinking ‘I can’t make new friends, because actually we can. It’s just about putting ourselves in positions where we do expose ourselves to people who also want to make friends,” she says.

Her book highlights the many new ways adults can make new friends.

However, ways of identifying and losing ‘bad’ friends is also looked at. What defines a bad friend can include a multitude of negative attributes and toxic behaviour, she says.

“Some of these are obvious toxic behaviours, like they’re bullying you or they’re being really overtly aggressive, telling you to shut up and just have no respect for you.”

More of these toxic behaviours are covert, including passive-agressive behaviours and spiteful putdowns dressed up as humour and sometimes these are hard to put your finger on, she says.

“They’re sneaky and kind of manipulative and you don’t even realise it’s happened until it's 10pm and you’re standing in the shower and you’re having a conversation with yourself and think you ‘did they actually say that to me’.”

She says a quick and easy signpost as to where you’re at with that person is simply to go with your gut, how that person makes you feel. Self-validate your emotional state that person leaves you in.

“If you feel worse after an interaction with this person – drained and exhausted, or put down and hurt – that feeling is a really good signpost that something is not right in this friendship.”

The instant gratification, simplicity and superficial interactions of social media have in some ways conditioned us so that we forget that real, meaningful friendships deserve more than pushing a ‘like’ button, she says. Cultivating and respecting a friendship can be affected by modern culture.

“The rapidity of how we speak to each other and engage is awesome but it means we have to pause every now and again and take stock, asking ‘am I doing this with conscious thought and awareness … and honouring our friendships and behaving in a way that’s really showing integrity to people that we love,” she says.

One of the tough things about dropping a friend is other societal norms that hold up friendship as something that should weather all storms and is therefore not subject to the same conditions as an intimate relationship.

It is widely accepted that ditching an abusive partner is beneficial and essential to one’s wellbeing, but there’s more of an ambiguity when it comes to friends, she says.

“It’s this idea of ‘once a friend, always a friend’ and it’s like we’re giving these people a hall pass to treat us however they want because they’re a friend of ours. But what people seem to be missing with the friendship title is friendship is a reciprocal relationship.”

The fallacy that friendship is all about giving, she says, sets us up for burn-out, adrenal fatigue and a world of pain.

“What the longitudinal studies are showing us is that strained friendship was associated with greater chronic illness, with shorter lifespans and the effect on our health was like the equivalent of smoking and obesity.

"So, it has this incredible impact on our physiological health to be around these people who treat us poorly.”

The studies showed good friendships had the opposite effect, with fewer friends and higher quality friendships giving you bigger quality of life across many indicators.

There are numerous reasons why so-called friends are toxic towards us, she says, but that our own roles in the dynamic should also be scrutinised.

‘I think the main thing here is we should be asking ourselves are we playing at bit of a role here? So often it boils down to actually speaking truth. So, when somebody speaks to you really awfully, being able to say to them, please don’t speak to me that way…

“We have a bit of this all or nothing that we have in society that ‘oh my gosh, if I assert my boundaries, then I’m going to detonate this bomb of confrontation or awkwardness, so I’ll just do nothing.

The middle ground is to simply state the truth in a calm, measured voice with integrity.

“It’s this assumption that if I say something it’s going to make it a whole lot worse, they might think I’m too sensitive, or accuse me of being crazy. They might gaslight me into thinking it’s unreasonable, when actually it’s perfectly reasonably and you’re just telling this person it’s not OK to treat me that way.”