Asking for spare change, landing a job instead!

Domino's pizza franchise owner Rishi Sharma was on his way to work one morning in Lower Hutt when he spotted a man using a pizza box to ask for spare change from passers-by.

One thing led to another, and instead of giving him a few coins, he ended up giving him a job at one of his outlets.

Rishi told Jesse Mulligan how he came to chat with Brian 'Sooty' Wallace. 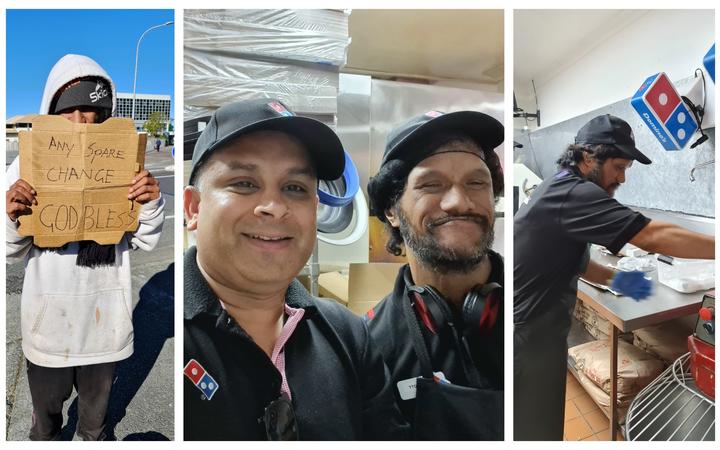 “I saw the pizza box of my brand and so I parked my car and approached this amazing guy Sooty and I just said ‘hi mate how are you doing?’ and I wanted to see what was written on the box on the other side. He was asking for spare change.

“As soon as I spoke to him, the manners were very nice,” Rishi says.

Rishi noticed Sooty was shivering so offered him a coffee and the pair walked to a nearby café.

“It was just a great conversation, he was very humble, and I just made up my mind I just have to give this guy an opportunity.”

After the coffee Rishi offered to make Sooty a pizza at his Lower Hutt store.

“We had a coffee and I said did you have something to eat and he said nothing today … can I make a pizza for you? I have a Domino's store.

“I invited him to the store, ‘what pizza would you like to have?’ He asked for a ham and cheese and I said 'mate can I make you a meat lovers? And he said no I like ham and cheese it’s my favourite.”

While the pizza was cooking they chatted and Rishi discovered Sooty was homeless.

“I read somewhere the world is full of nice people, if you can’t find one, be one and I said ‘Sooty would you like to work for me?’ And he said yep.”

Three weeks have now passed and Sooty is learning the ropes and getting his life back on track, Rishi says.

“The journey is great, he’s very happy learning a lot of new things.”

Rishi says business has an obligation to help where it can. He has three stores in the Hutt Valley employing between 80 to 90 staff and says Sooty is happy in his new role.

“He is very happy, he has a house in Taita now and Work and Income has been very amazing. I spoke to them last Monday and a lot of things have been sorted.

“Today he’s at the store right now he’s working and I’m just looking forward to going back and working with him,” Rishi says.