Simon tells Jesse Mulligan he's been writing poetry since he was 13: "I've clocked a good 30 years at the wheel and I finally feel comfortable releasing a book of poems." 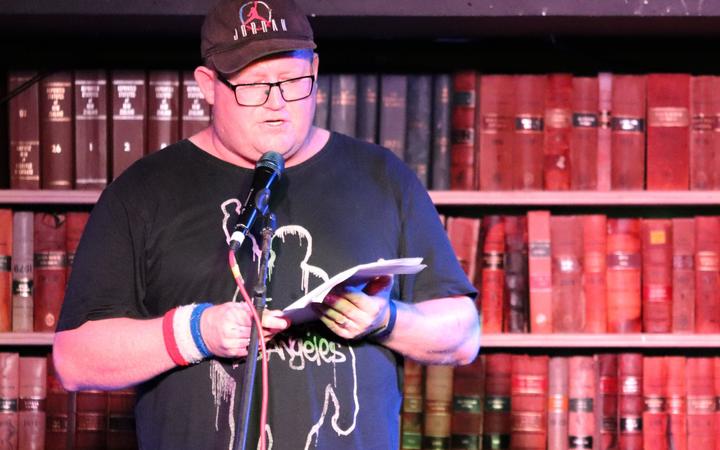 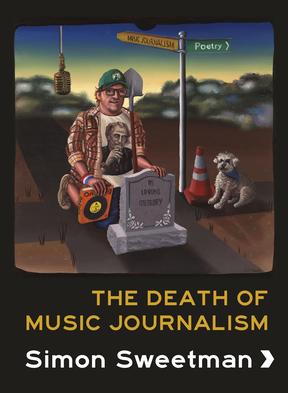 All poetry is a kind of diary, Simon says, and his poetry is especially so.

He's waiting a long time to be ready to present a collection of his work – and is more excited than daunted.

The title is open to interpretation – Simon says he just found it funny and quirky.

"I thought maybe people would pick it up and wonder if it was some giant rambling essay [literally] about the death of music journalism."

The book contains no less than 79 references to pieces of music and a QR code on the back will take readers to a Spotify playlist featuring all of them.

The Death of Music Journalism is published by The Cuba Press. It launches at the Wellington venue Meow on Sunday 11 October.

Taxi by Simon Sweetman (via Off The Tracks)

he's in the back of the

my son asks me

if the day he was born

was the best day of

you and mum got

can't have one without the

he nods. and i didn't go on

to tell him that the third best day

of my life was when he had

just turned two - and we were

for christmas. he and his

and i had the ipod connected

to the car stereo. and i had made

the theme from the tv show 'taxi'

the repeat function - instead

i had the same track loaded

ralph macdonald on percussion and

eric gale's guitar slow-burning in the

i was their taxi driver. i'd look

to the left. then to the back-left.

that music from my childhood guiding

(a new york minute?) driving over (and over)

all fire. all glitter and gold.

And the music my mantra, my

meditation, taking me back to the

for dad to come home with the

at louie's anger and jim's madness

and the weird and silly and wonderful

me and my brother and my

mum and dad were maybe

at our closest watching m*a*s*h and family

ties, blackadder, the young ones, cheers,

married with children (and a few others).

but here i was…

driving the white lines with this

music that was taking me back

and taking me back as i was edging

and so much more than that.

(does there need to be more than that

though? those two things are so

beautiful, so joyous and sad all at once,

they've helped me along in so many ways

through so many ways…)

up in that slick and lovely groove.

people would maybe call a song

and so it rolled on and on

and i did too.

checking their faces. me

elated. the calmest i'd been

and i was never

i was their alex reiger.

because they didn't just

have me. i had them.

and we had the music.

even if it was only

and if i whispered that

it was the best,

well, that was only