Donald Trump's rise to power and the vulnerability of American democracy

There was a moment in 2016 when journalist and anthropologist Sarah Kendzior, realised Donald Trump could win the presidential election.

During the campaign Trump cited unemployment figures of 40 percent, untrue, and yet not wildly inaccurate, she told Jesse Mulligan. 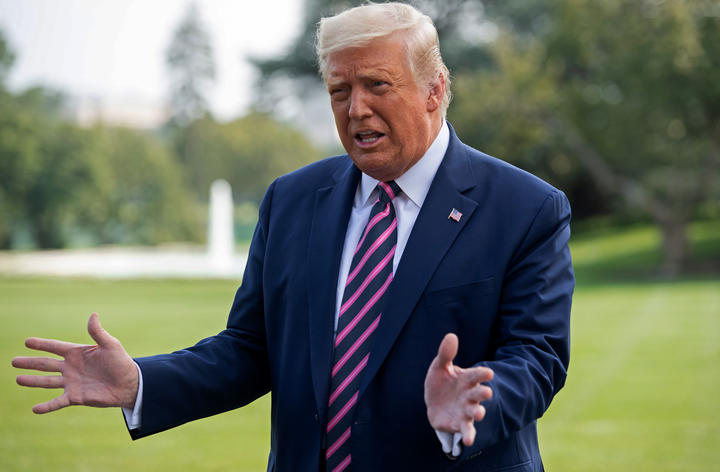 “I live in the downtrodden, beaten-up part of America. I don’t live in New York or DC. When the Obama administration and others would crow about how great the economy is, how low unemployment is … I did not see that at all,” she says.

What she saw around her was rather rampant underemployment.

“Someone could be technically employed, but unable to pay their bills unable to buy food.

“I had a lot of friends working more than one job to try and make the kind of salary that would be considered a poverty level salary in the United States.”

Trump had struck a chord in an area that didn’t see the rosy economic picture painted by the Obama administration.

“To hear someone acknowledge that, it can really resonate, even though the statistic itself is wrong, it felt correct, it certainly felt more correct than the Obama administration saying there is 5 percent unemployment.”

She writes about the inevitability of a Trump-type presidency and the fragility of American democracy in her new book Hiding in Plain Sight: The Invention of Donald Trump and the Erosion of America.

Demagogues and “proto dictators” tend to arise at times of severe institutional collapse, she says.

“I’ve studied the former Soviet Union and especially authoritarian states and the way Trump thinks, operates and governs, the way his backers work, it is just like people from Azerbaijan Uzbekistan, Russia other kleptocracies in which a small pool of family members and lackeys scoop up the money that can be made from abusing executive power.

“I could envision that happening here in part because of what had happened to the economy; because of entrenched income inequality, because of this plutocracy we have in America it’s similar to the oligarchy in places like Russia.”

Trump cleverly spoke to regions in America that were hurting, she says.

“That was the kind of thing he was very good at, he was capturing the heart of the situation.

She describes Trump as a “career criminal” who has assembled a mafia-like administration.

“[Trump] has been working in tandem with organised crime, in particular the Russian mafia and by association the Kremlin … since around 1987.

“When he went into debt and went bankrupt in the late 80s early 90s that’s who dug him out and when he was remade as this reality TV tycoon, it was friends of Putin and people in the Russian mafia who were helping make that possible, because they saw Trump as a vehicle to their own ends and their own goals.”

You get a “mafia state” when you elect a “mafioso,” Kendzior says.

“And he appoints his fellow mafioso.

This institutional weakness surprised her.

“I knew that he would govern like a post-Soviet kleptocrat, I didn’t know that our institutions were so weak that people would barely put up a fight against that.”

The Mueller Report being a case in point, she says.

“There was incredible hesitancy to interview key people like Ivanka, Jared Trump other people in the inner circle.”

She initially has some hopes the Mueller probe would get to the bottom of allegations Trump conspired with foreign actors.

“In 2011 Mueller laid out a speech describing the exact kind of group that surrounds Trump, this sort of mish-mash of traditional organised crime, corporate crime and state corruption and how the lines between them had blurred over the past several decades making it harder to prosecute, but nonetheless essential.

“Then he says [Russian crime boss] Semion Mogilevich, whose operation Trump was working for, was the biggest threat to democracy and kind of embodied this new form of organised crime.

“So, I thought initially OK at least Mueller understands what’s going on. He had no will, he had no interest seemingly in stopping it.”

“In early 2018 that probe basically died, it was like a zombie probe until 2019 when it was officially killed.”

While some may have regarded Trump as something of a joke, she believes he is being taken more seriously now by sections of the media and the political establishment.

“We have over 200,000 people dead, he’s openly said he plans to steal the election, he’s talking about things like having a third term, barring Joe Biden from running – things that people thought were impossible or ludicrous - he has now proven he will do over and over again.”

And if he loses in November, he won’t take it lying down, she says.

“He’s going to say he didn’t, that’s the first thing, he’s not running to win, he’s running to steal. And with that contested election comes a call for violence, that’s what he threatened in 2016 and he’s threatening it again in 2020. If he doesn’t win, there’s going to be violence on the street.”

There could then follow a long court battle, she says.

“Similar to the election of Bush vs Gore but much more nasty, much more brutal.

“You’re getting previews of the tactics the Republicans will use with the death of Ruth Bader Ginsburg and their rush to replace her before the election.”

Democrats must realise the rules don’t apply anymore, she says.

“There aren’t any norms, protocols, standards, ethics - all of that is gone.

“And people on the other side, the Democrats, have to realise that’s what they’re dealing with and they have to not back down.”