The Edwin Fox in Picton is a significant piece of world maritime History and come to the attention of the BBC and Canadian researchers.

Karen McLeod, manager of the Edwin Fox Museum, tells Jesse Mulligan about the work being done to preserve the wreck and put it on display. 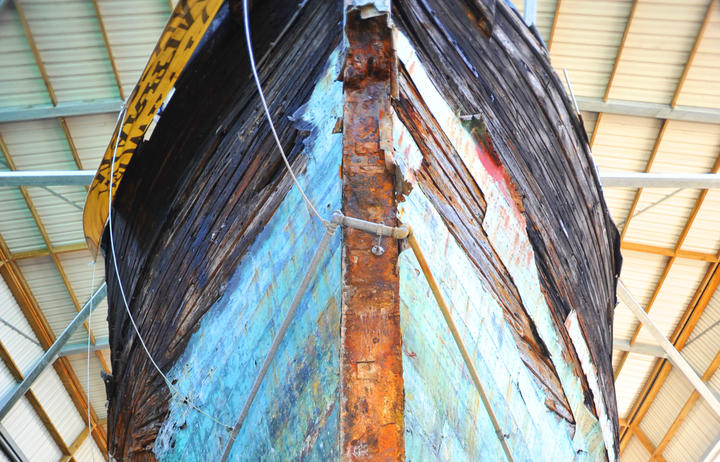 The ship ended up in Picton in the late 1800s after a varied career, she says, after it ended its life as a refrigeration ship for the lamb industry.

“It was a convict ship, it was a immigrant ship, it carried a lot of troops between England and it’s the last ship of this design anywhere in the world, so it’s pretty special we have something like this right here in New Zealand.”

By the 1960s its was being used as a coal store for Picton’s freezing works.

“It wasn’t looking too flash and Norman Brayshaw who became quite big with heritage in Marlborough saw the value in it and purchased it for the grand total of a shilling and set up the first Edwin Fox Society.

“They towed it round into another bay just until they could work out what they were going to do it and unfortunately it sat there for 20 years.”

The ship deteriorated further in that time, she says.

“A lot of the damage was done in that 20 years through weather and tides … locals with chainsaws didn’t help either.

“In the 80s another group of men got together and gave it another go to secure a site for it and they were successful, and it sits here on Picton foreshore now.”

The ship is in dry dock and sits beside the museum telling the story of the Edwin Fox, she says.

“It’s covered so much of world history - be it Australian convict history, there’s 800 immigrants came to new Zealand on board it in the late 1800s.

You get a real feel of what it was like to be a passenger on board, which wasn’t very nice.

"It’s not been restored, it is just a preservation project.”

The identity of Edwin Fox has come to light in recent years, she says.

“Over the years it had been narrowed down to about three Edwin Foxes in England and we’ve recently been working with a couple of professors out of a Canadian university who are writing a book on the globalisation era of history.”

Those researchers have discovered Edwin Fox was a notable London entrepreneur.

“He was Chair of the Grand Junction Waterworks company in London there’s a road named after him.”

The ship came to global attention when BBC’s Coast programme featured it, she says.

“We were filmed by the BBC Coast show a few years ago, with the BBC historian Neil Oliver, which was shown on the History Channel all around the world. A lot of international tourists had seen it and put it on their itinerary.”

Visitors to the ship can explore below decks, she says.

“It’s definitely got some atmosphere the ship. It has its own smell and we are learning more about some of the people that were on board it as well.

“We even have diaries of some of the voyages.”

The Edwin Fox has now been 3d mapped, she says.

“The next part of the project, when we get some more funding, would be to rebuild it so we can actually restore the ship but digitally.”