Unbeknownst to many of us, a small asteroid was passing by planet Earth last night. 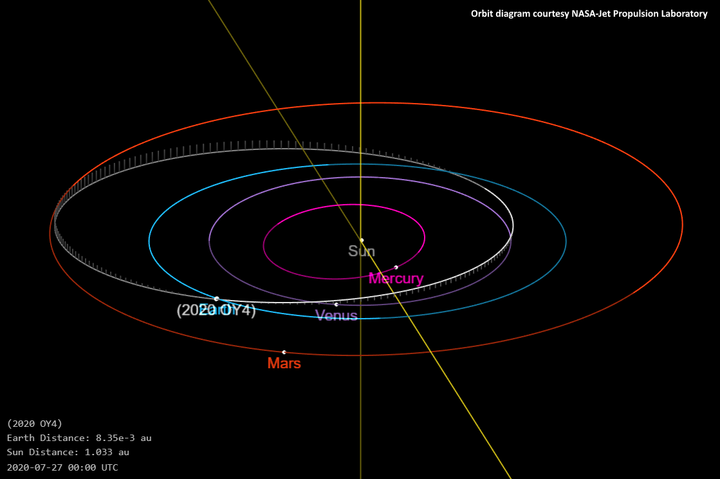 It was so close in fact that it came nearer than satellites in what scientists describe as a 'geostationary orbit'.

Nelson-based space scientist Duncan Steel, who has spent time working for NASA, has written about the asteroid for sciblogs. He tells Jesse Mulligan if the object had impacted the Earth's atmosphere it would have turned night into day, releasing a huge amount of energy.

Steel also says scientists are continuing to track the movements of a huge asteroid discovered earlier this year, which is thought to pose a danger to the Earth when its expected in about 70 years' time.

Unlike the decades' warning for that asteroid, there was little forewarning the one that passed the Earth yesterday.

“It wasn’t discovered until late on Sunday evening by a team in Arizona,” Steel tells Jesse Mulligan. Two astronomers from University of Canterbury at Lake Tekapo Observatory, including Alan Gilmore, were the next to observe it, he says.

“They got a series of observations and then other amateur astronomers actually in Croatia and France tracked it and then it was possible to say ‘hey this one’s coming very close, but it certainly will miss’.”

He says in any case the asteroid wasn’t that big – between two and five metres across, but would have released a significant degree of energy if it would have hit the planet's atmosphere.

“It would have blown up in the atmosphere and been a very bright thing, causing consternation to people… If it had of hit it would have lit up the sky like it was day time. It would have released energy the equivalent of 3000 tonnes of TNT.”

He says those kinds of events happen once or twice each year and usually above unpopulated areas of the planet.

Asteroids are material left over from the formation of planets, unlike meteors, which break off from comets.

The asteroid belt is a torus-shaped region in the Solar System, between the orbits of Jupiter and Mars, and is occupied by many solid, irregularly shaped bodies, which have been there since the solar system’s formation, approximately four-and-a-half billion years ago, he says.

“Every so often something might happen to knock them out of orbit, so these come in crossing the Earth’s orbit, or the orbits of Mars, Venus and Mercury and eventually they’ll hit one of those planets, or drop into the Sun or equally the effect of a planet can be to flip these objects on to orbits that take them out of the solar system never to come back again.”

Worryingly Steel says an asteroid was identified in July this year that could pose a threat to the Earth. However, it is estimated to arrive in 2091.

“This one’s much bigger – about half a kilometre across. It’s called 2020, obviously the year, and then NK21. You may well be seeing more of it in the media in the next week or two. It poses a possible impact on the Earth but not until a long time in the future. It may sound amazing that we can predict where this object is going to be for the next 70 or 80 years.

“More data will be collected with optimal telescopes tracking it, but also big powerful radars, which can detect it. With such information it is possible to refine our knowledge of its orbit and be able to say for sure that most likely it will miss the Earth. But advanced warning is the important thing.”