Emily Strayer of The Chicks (formerly the Dixie Chicks)

The band formerly known as The Dixie Chicks have a new name and a new album, the first in 14 years.

The Chicks have been incubating some hurts from divorce, and serious ghosting by the country music industry after anti-war statements. The Chick's Emily Strayer says their return to the spotlight with Gaslighter was inspired by a tour back in 2016.

“It was just time and I think we knew it was time. After the last 2016 tour we got to go out and play for all the fans and were so excited that they were there," she says. 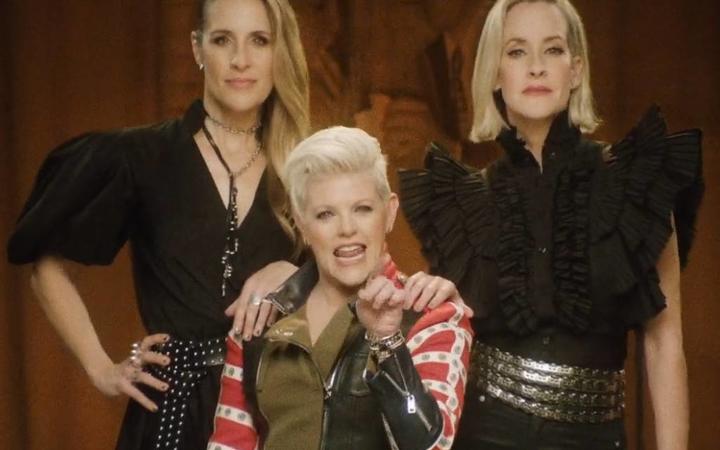 "We got to see a lot of new fans too, our demographic looked like it had been added to… and in effort to want to do that again, we thought ‘we should have new music next time so we’re not just one of those oldies bands.”

The album’s release is the last recording under the Sony label, making the Chicks free agents.

In March 2003, band member Natalie Maines made a statement at a concert in London criticising President George W Bush and the upcoming Allied invasion of Iraq. Conservative country and western fans abandoned them.

Strayer says it seems like a life time ago and the controversy doesn't inform anything they do today.

“There’s more like a lingering general sense of what happened. Writing this song and this album Gaslighter, it was catharsis as usual, but it really didn’t have that much to do with the controversy or things we’d gone through.

“It took really reflecting on it to realise back when we were being cancelled, there wasn’t the social media like it is now…

“I do think things have changed, everybody has a voice now, everybody has a platform, anyone can just talk about the sitting president and it’s just par for the course. It’s such a weird thing and it seems so antiquated at this point, to look back and see what we went through."

The innovative approach of singer-songwriter and producer Jack Antonoff is felt throughout the new album. Strayer says the experimental process was fun, as the Chicks made up the music as they were writing the songs.

“He does everything… he’s all over the place and he loves all music. He was a real cheerleader for us. We wanted to experiment, but he was like, ‘nah, you guys need to keep the essence of what you bring to the table and that was really nice, to not feel like you were constantly having to find room for yourself on something. He was always conscious of that.”

Gaslighter was the first song written by Antonoff and the group thought its sound and tone would define the album.

“It sounded like a lead-off point, we ended up going in a lot of different directions. But we always felt strongly about that song. It defines the subject matter of the album a little, or maybe a lot.”

Gaslighting is a term often associated with narcissistic abuse and used by therapists, describing a technique of abusive communication meant to disorientate and confuse a victim. The term’s use is now mainstream.

“All of us have been in counselling or psychotherapy at some point to figure things out. It’s a good exercise to go through, or we believe it is. We’ve all learned that term through are therapy and I do think it’s come to the forefront,” she says.

Another song Julianna Calm Down, is about life after a toxic relationship, and is a lyrical message directed towards all the Chicks’ daughters and nieces, Strayer says.

“It’s a kind of plea to them, that they’re in a time in their lives when they don’t need to take heartbreak so seriously, that there’s so many bigger things and they’re going to get through it.”

She says she wouldn’t want to be a teenager today because of the social media pressure and the pitfalls of that method of communicating.

“There’s so much pressure and so much attention on their online profile to the world. How do you figure out who you are while trying to put on this personae on social media.”

The Chicks aren’t too worried about how people get access to their music – their new album features on online social media and streaming platforms.

“We had such diehard fans and we have a such a diehard fanbase, that we feel like people will find us and if there’s radio airplay, awesome. If you support us we will always be grateful, but can’t be our constant attention.”