When Aaron Smylie bid $8150 for a pair of 260-year-old glasses, he got a feeling his late partner Helen was telling him ‘are you bloody mad?’. 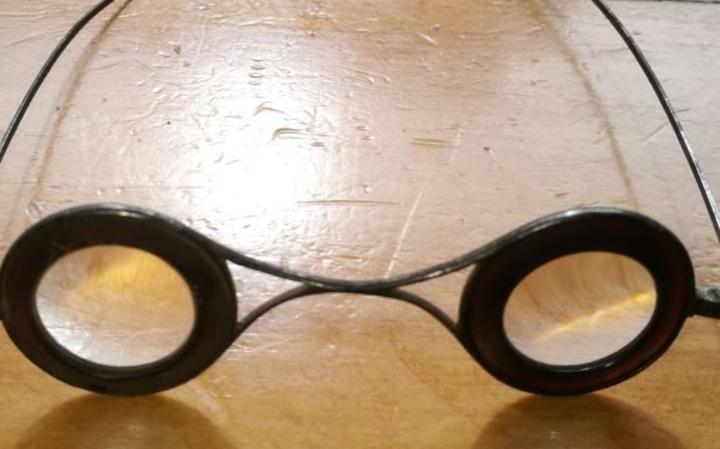 The tipshop put the 'Martin Margins Spectacles' on Trade Me for $300. Photo: Trade Me

Smylie was involved a bidding war on Trade Me for a pair of antique glasses called the ‘Martin Margins Spectacles’.

The glasses, according to Trade Me, are a style that was developed around 1760 by London optician Benjamin Martin. The inserts are made from horn or tortoiseshell and designed to restrict the amount of light reaching the eyes.

The glasses had been discarded at Wellington's Southern Landfill but were found by staff and ended up on Trade Me for a reserve of $300.

They attracted more than 7200 views and was being watched by 183 people. Smylie eventually won the auction, bettering the one other bidder by $1500.

When Smylie stumbled across them, they immediately caught his eye.

“These aren’t just any sort of glasses… I’m into a lot of quirky things anyway… I quite enjoy that sort of thing… I just liked them and I’m just lucky I had the opportunity to actually buy them,” he said.

The glasses also held a touching sentimental value to them, he said.

“It was really an emotional thing for me just losing my partner recently, it’s a bit of a weird thing, because during this Covid lockdown I had to self-isolate because of my job and it was quite tough being away from her, not being able to care for her for that time.

“During that time of course we were FaceTiming each other, with FaceTime you can actually create characters on your face and what Helen did is she put a pair of glasses and whiskers to look like a cat… that’s what I’ve got as my screensaver because it was a really good photo of her and being her birthday (on Tuesday) she’s still very dear in my heart.”

Despite the resemblance to the picture of his partner, he doesn’t think she would approve.

“I did get a feeling over my shoulder of Helen saying, ‘hey are you bloody mad?’ I could feel that one,” he said with a laugh.

Despite what he thinks Helen would’ve made of the glasses, he couldn’t pass up the opportunity to buy them.

“Just looking at them the design of the frame is really, really intricate, for that era to actually come up with something like that must be quite special.

“They are unique, I haven’t actually found that design on the (inter)net as such, there were quite a few designs of them, which from what I can gather, depicts the age as well… anything like that, that’s really intricate in design, attracts my eye.”

“I’ve got a glass top table which has got a lot of quirky things in there and I’ll just basically join it in there. If decide to part with them at a later date then so be it, but just enjoy them now for what they are.”