The escalation of antibiotic-resistant superbugs

Before the pandemic antibiotic resistant bacteria is what kept many global health officials up at night.

Superbugs have not gone away and are out there figuring out ways to defeat whatever medications we come up with.

Professor Muhammad Zaman puts the spotlight back on microbes and our role in their rise with his book A Biography of Resistance: The Epic Battle Between People and Pathogens. 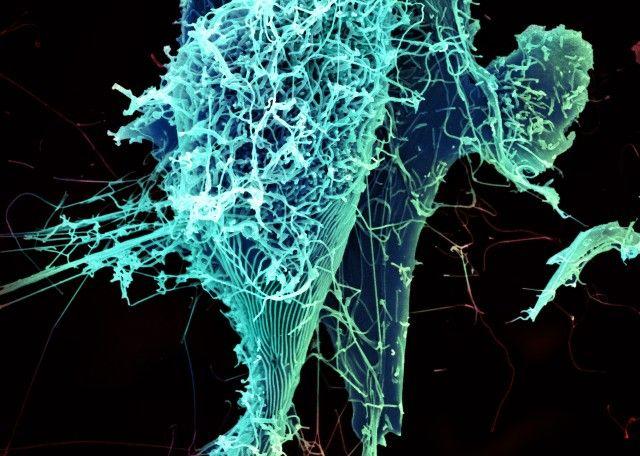 String-like Ebola virus particles are shedding from an infected cell in this electron micrograph. Photo: CC BY 2.0 NIAID

Bacteria have been around the planet for over 3 billion years, he says, but it is only in the last 100 years that we developed antibiotics to fight the bad bacteria.

But our poor use of these subsequently has come back to haunt us in the form of anti-microbial resistance.

Antibiotic pioneer Alexander Fleming warned in his Nobel prize acceptance speech 80 years ago that resistance was a high probability if we misused the emerging class of drugs. His warning fell on deaf ears, Zaman says.

“In the late ‘40s and ‘50s new drugs were coming to the market very, very regularly, which meant there was a feeling that science would continue to discover them … so what’s the big deal if one of them doesn’t work? There’ll be another one round the corner.

“And I think that’s when the problem started to become one that was intractable, there was a point when the honeymoon period was over.”

By the 1970s we knew we had a problem, but poor practises continued, he says.

He believes drug-resistant bacteria is as bad as the current coronavirus pandemic.

“I think we’re very close to that point … the conservative estimates put the number of people dying because of drug resistant infections in the United States to be about 32,000 people per year, every year.

“Internationally this number is in several hundred thousand.”

And antibiotic resistance could render what were once routine surgeries very problematic, he says.

“We are very close to a point where the slowly and gradually rising tide can become overwhelming in a very short period of time.

“There have been reports commissioned by the UK government, and elsewhere, that put the number of people dying in millions.”

The fight against resistance will be multi-pronged, Prof Zaman says.

“There is an increasing appreciation that we need to maintain this balance between good bacteria and bad bacteria, excessive use of antibiotics not only harm overall health and wellbeing they also attack the good bacteria.”

Education efforts such as those by the Wellcome Trust are also vital to halt the indiscriminate use of antibiotics he says.

“So ordinary people can get a sense of why using antibiotics without an appropriate prescription is a terrible idea, it doesn’t do anything with seasonal flu, it’s a terrible idea to take an antibiotic every time you sneeze.

“And why? It’s not just a bad idea for your own health, but the health of people around you.”

There are alternative therapeutic options to fight bacterial infections.

“Certainly vaccines, which are a powerful tool but not easy to develop and expensive.

“Another one, an even older strategy than antibiotics, is bacteriophages. This is the time when everybody is reading about viruses well not all viruses are bad, some viruses are used as a therapeutic tool just as they would infect a human cell they can also infect a bacteria cell.”

Bacteriophages were discovered 100 years ago, he says.

“They were used as a potent tool to fight infection, but they lost momentum because antibiotics were easy to produce, they could be produced in vast quantities and there was also scepticism about them because the country that was really taking the lead in producing them was on the other side of the Iron Curtain - the Soviet Union.”

But they have been making a comeback since the 1980s, he says.

“They can certainly complement a more varied set of approaches.”

He told Jesse Mulligan he was cautiously optimistic, we can turn the tide of resistance. And certain countries are already doing so.

“Scandanavia is an excellent example, New Zealand has done well. These are countries that have shown you can do it with good policies and good practises.

“This is no longer a science problem, if we think the scientists alone are going to get us out of this I think we’ll be disappointed.”

Three things must happen if we are to get on top of antimicrobial resistance, he says.

“We have to recognise this is a problem in which everybody has to take a part. You can’t have three countries do it and 190 not do it.”

Fostering peace in the world is also a big factor, he says.

And we will need a broad alliance of disciplines to come together, he says.

“We have to invest in this broad portfolio of basic science and applied science, economics and legal contracts across countries, if we do that I think there is enough momentum in all of these individual sectors that we can really turn things around.”

This is a story of human behaviour, it’s not a story of bacteria alone, he says, and we must change our behaviour to have a hope of winning.