A steaming bowl of noodles and wontons in soup, with a side of crisp Chinese broccoli feels like home for New Zealander Nina Mingya Powles.

Home is complicated for this poet and writer of mixed Malaysian-Chinese heritage, who has spent her life between Wellington, Kota Kinabalu, Shanghai, and now London. 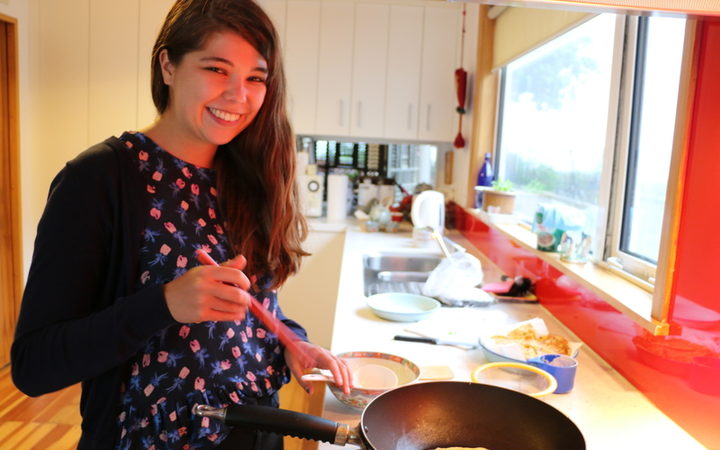 Born in Wellington, Powles parents both worked as diplomats. At the age of three, she moved with her family to New York. After a stint there, they moved back to New Zealand, then spent three years in Shanghai and again moved back to Wellington. It has been the pattern of Powles' life.

Homesickness comes in waves for Powles and she’s often homesick for multiple places at once.

Being between cultures and languages is what much of her writing focuses on.

Her new book is a collection of essays that celebrate food and its importance to identity. It's called Tiny Moons: A Year of Eating in Shanghai.

Powles grew up obsessed with food and is happiest when eating.

“I think it (food) is such a potent, important sensory thing because you can put love into things that you cook, and I think it’s a way that I certainly express love and care for people.”

As her grandma doesn’t speak English and Powles herself doesn’t speak [Chinese dialect] Hakka, much of their communication was through the food they shared.

“It was a really deep way of communicating beyond language,” she says.

“She was an amazing cook and loved to eat as well, my mum still tells me a lot of the stuff she used to cook for her when she was little, and it definitely got passed down to my mum who in turn is a great cook. I think, more than that though, loves to eat.”

It’s an inherited shared experience, despite being geographically separated, she says.

The first words Powles’ mum taught her in Mandarin were food related.

“Basically, when I was grumpy, it meant I was hungry she learnt very quickly, which is still true.”

And it’s political, she says.

“I find myself often getting really anxious about all these things, the way that we label some foods inherently good and some inherently bad and the ways that bodies are judged and how we talk about for instance, fat and obesity as a kind of moral failure, there’s a lot of morality connected with eating, it’s a really sticky area of life.

“I just wanted to remind myself of the joy of it for me.