Each week at this time we bring you stories from New Zealanders who were forced to leave their homelands and have resettled here. This week, afternoons speaks to Millad Rashidi from Afghanistan.

Rashidi tells Jesse Mulligan he came to New Zealand around four and half years ago. 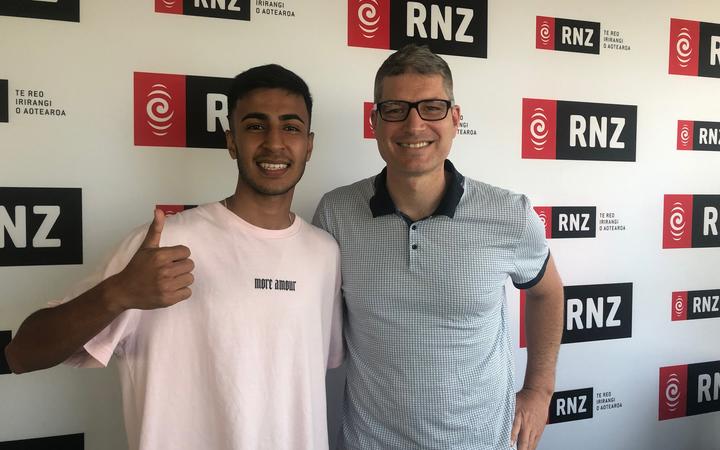 “We were forced to leave Afghanistan because my mum was an English teacher and was selected as one of the top 11 English teachers from the country and attended a programme in the United States where she had dinner with Mr George Bush in the White House.

“She was really active for a long time but when she came back to the country the Taliban were strongly against education and the United States. That resulted in us leaving the country.”

Rashidi says he’s really proud of his mother who gave him a good head start in life with education.

The family first went to Pakistan for three years where they were registered as refugees and were eventually told they would be going to New Zealand.

“I didn’t know anything about New Zealand at the beginning. They took us into a meeting and told us we were going there and I was like ‘where is that?’”

After that, they went home and googled New Zealand. They first thing they saw was Kapa Haka. He’s now a part of a Kapa Haka group himself.

“We saw that and we were super excited to come and experience New Zealand.”

There were some adjustments to make for the family in New Zealand. His father is studying English in the hope of getting a job in construction while he drives Uber part time and his mother is studying while doing relief teaching at a kindergarten.

And for Rashidi, he was surprised one day at school when a student suggested a game of footy and found himself getting tackled.

“When I got tackled I was super confused,” he says. He had been expecting a game of soccer and didn’t quite understand rugby.

A teacher told him he should turn the story into a children’s book which he finished up before high school ended for the last time.

As for making friends at school, Rashidi says it was difficult in the beginning because of the language and cultural barrier. It didn’t help that at his first school, he was the only Middle Eastern student there.

Now, he has a group of friends he met through playing soccer - not rugby - which helped him integrate and learn the language a bit more.

Next year, he wants to take a gap year and work on Atawhai, an initiative he’s started that aims to help migrant and refugee youth and which is publishing his book. It has already received endorsements from NZ Rugby and Jacinda Ardern. It’s a hard sell for his parents though.

“I’m really trying to convince them but they’re like ‘look at your cousin, he’s becoming an engineer or doctor’. I’ll get there,” he laughs.

“I always believe in just learning myself, teaching myself things. As many other refugee kids or migrant kids who are affected by war and terrorism, I always told myself, Taliban could take my childhood, but they can never take your future from you.”