Chester Borrows: 'John Key once told me I was National’s leftie'

From locking criminals up to lobbying for their rights, Chester Borrows has gone from the police to parliament to advocating prison reform.

Borrows tells Jesse Mulligan his goal as a youth was to become a farmer but he had no land coming his way so his family told him to try something else. 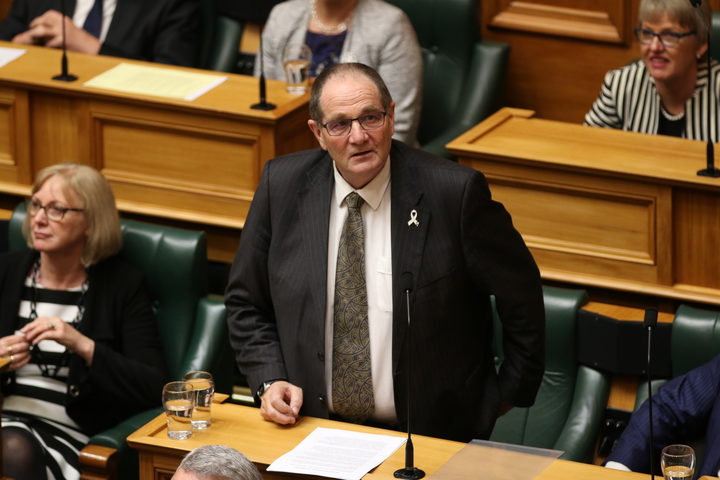 “It was hard case. It was a very crucial time for a young, wet behind the ears, guy to go off and live with a bunch of testosterone filled teenagers. I went there having never had a girlfriend, didn’t smoke, didn’t drink. Within a short period of time I was a drinker and smoker and had my first girlfriend and had experiences I’d never had before.

“It was an interest place to be and I was never a very good student. I managed to scrape through and graduate bottom of the wing. My forte was around practical stuff not academic stuff.”

Borrows says he really enjoyed his police career which ended up lasting 24 years and encompassed some major events in New Zealand history.

His first choice for Bookmarks was the Bible. He comes from a religious family and is himself a self-identified Christian, but says he doesn’t like religious people.

“I like the bits of the Bible that I agree with and fit in with my thinking, like most Christians. I know that over the years I’ve changed my view on things as they relate to my faith and I think I recognise more and more that the Bible was written in a certain context.”

He says Jesus Christ sets a good example about overturning commonly held and entrenched views and political structures which conservative Christians could take a page from when it comes to things like gay marriage and the place of women in society.

“I think the other thing I like about the Bible is that it’s very clear Jesus was a politician and was very good at politics. He knew how to play the game.”

Borrows says it’s not the easiest thing to talk about the Bible and admit your faith in a country as secular as New Zealand where Christians are encouraged to play it down.

“I don’t worry about it so much anymore but I certainly have previously and from time to time. People like to have Christians in a pigeon-hole which means narrow-minded, fundamentalist haters. In actual fact the vast majority of Christians who take their faith seriously are very broad-minded and giving to the community - and we’d be stuffed without them.”

Borrow’s publicly denounced Israel Folau’s comments about gay people going to hell and said Christian’s who declare their faith with prejudiced and bigoted comments are an embarrassment to the church.

“You all end up with egg on your face and you all end up trying to justify why this guy’s saying that and I just don’t want to get into those battles… you don’t have to buy into that message of hatred.”

He was formerly a National MP and hesitantly says he would remain in National if he got back into politics despite his left-wing stance on justice.

“John Key once told me I was National’s leftie. And he said we needed one. I was accused of being in the wrong party by both parties.”

The thing he’s most proud of in his political career was the move to take the DNA of every person who’s arrested.

“It used to be you had to get a warrant but now we recognise that DNA is just a modern fingerprint… what that means is that when some leaves hair, semen, blood or skin at a crime scene, they can be identified. I think that little thing probably saved more victims than any other single piece of legislation that we might pass.”

Following his political career, he’s more focused on his faith and has become a lay preacher. He’s also finds more time for his painting.

“I painted a lot as a kid and I really enjoyed that into my teenage years, and then I just got busy with life. I always did a bit of cartooning and took the piss out of work colleagues.”

When he became an MP, he was asked to paint a piece for a fundraiser and it sold within minutes.

“There was several little endorsements that the painting was worth something and I really enjoyed it so I decided to take it more seriously.”