Senior station officer Katie Smart from Takapuna has been on the front line of the efforts to put out the fire at the Convention Centre in Auckland's CBD. She is also New Zealand's highest ranking operational female fire fighter. She tells Afternoons her experiences over the past few days being part of a massive effort dowsing the flames.

Smart says her and her team were on standby on Tuesday and got to the incident at around 3pm. 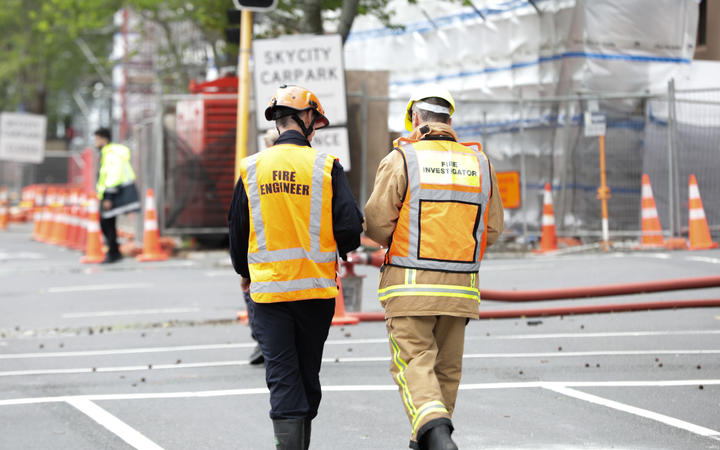 Fire and Emergency crew near SkyCity, where they had been battling a fire on the roof of the under-construction convention centre. Photo: RNZ / Claire Eastham-Farrelly

“Things were pretty chaotic when we arrived then… you’re really focussed on what you can do, you’re not thinking too much about the stakes or the consequences - you’re thinking about what your role is going to be, how you’ll fit into the structure, who’s who in the zoo, all those sorts of things.”

Smart says she’s been to big fires in the past, but nothing so high up or complicated.

On arrival, her firefighters were deployed and she was assigned the task of supporting the safety officers.

“I was on the roof, where there were safety concerns and we were eventually moved on, which was pretty devastating for us.”

She finished up at 9pm on Tuesday night and then was back on Wednesday night until 4am.

She says, without question, it’ll be one of the big fires of her career.

“I think it’ll be the one that’s talked about around the table for years to come. The firefighters that are yet to join our organisation will hear versions of this, I’m sure. It’s one of those very significant fires.”