It's 100 years since the first splitting of the atom - a scientific moment that heralded a new age. The man who ran the lab where it split was the Nelson-born scientist Ernest Rutherford.

His biographer, and physicist in his own right, Dr John Campbell says Rutherford was a smart kid, but he was also “just a regular Kiwi kid” who grew up on a farm and played rugby. He received the occasional mention of his play in the papers, but it was of course science that he took great interest in throughout his education. 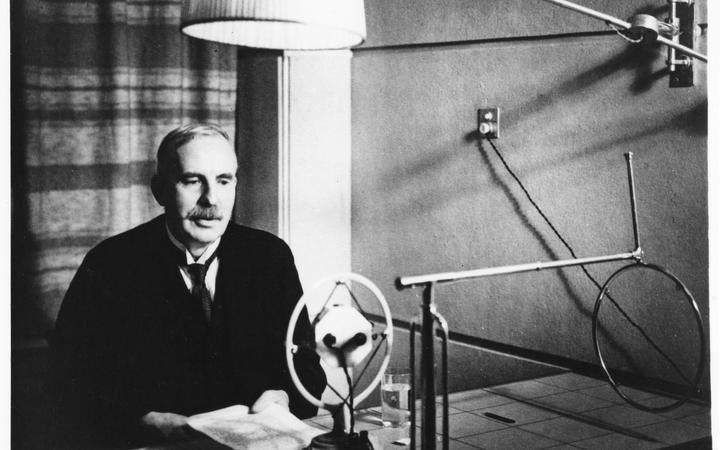 He’d actually taken several scholarships throughout his studies and ultimately also received one to go to Canterbury College at the University of New Zealand, Dr Campbell says.

“There were only 20 scholarships that had money attached to them and so he went back for another year, and then the third one was, he went back to university for a fifth year to get a scholarship to go overseas to work in industries of importance to New Zealand.”

During his first degree, he also decided to join the newly formed student Science Society.

“That [student] programme had the naughty word of science of those days – evolution. In almost every title there evolution – evolution of the elements, evolution of biology, and even evolution in religion,” Dr Campbell says.

“And this caused the Bishop of Christchurch to thunder from the pulpit, that the students of Canterbury college were satiated with agnosticism, the letter writer to the press had the answer, they should ban science from the college. Well, luckily they didn’t because one of the first to join that society was a second year student called Ernest Rutherford.”

After he completed that degree, he applied for another scholarship to go back for another year and get a Masters degree in mathematics and physics. But his professor of chemistry said that anyone that did so needed to commit to original research.

And from there Rutherford began pushing the boundaries, showing in his experiment that ion was magnetic up to about a million hertz, Dr Campbell says.

“No-one had been able to measure that high, and Rutherford developed several bits and wires – one of which was a timing device, about two metres of wire that guided a weight down and as it hit the bottom, it broke open two circuits, slightly different times apart, just by a screw you could raise up and down to alter this time, and he could measure times down to better than a hundred thousandth of a second.”

He also developed a magnetic detector of very fast current pulses, which at the time it was believed no-one had done before, until it was later discovered an American had also done that, Dr Campbell says.

“He was self-taught really, and [his chemistry professor, Alexander] Bickerton took great interest in his work but really didn’t lead because it was beyond his knowledge after the first year.”

Heading overseas to Cambridge University for his third scholarship in 1892, and at the age of 23, Rutherford continued to display his curiosity for physics and advanced in his accomplishments.

He’d taken his magnetic detector and shown demonstrations of how it could pick up on signals travelling through brick walls – a standard lecture practice back then. But it was suggested to him by Sir Robert Ball to extend it to be able to pick up on signals further afield – so that a ship could detect light houses in the fog.

“So he did that and he held the world record for the distance over which electromagnetic waves had been detected.”

Then witnessing his capabilities, JJ Thompson invited Rutherford to work with him on his research of electrical conduction of gases. 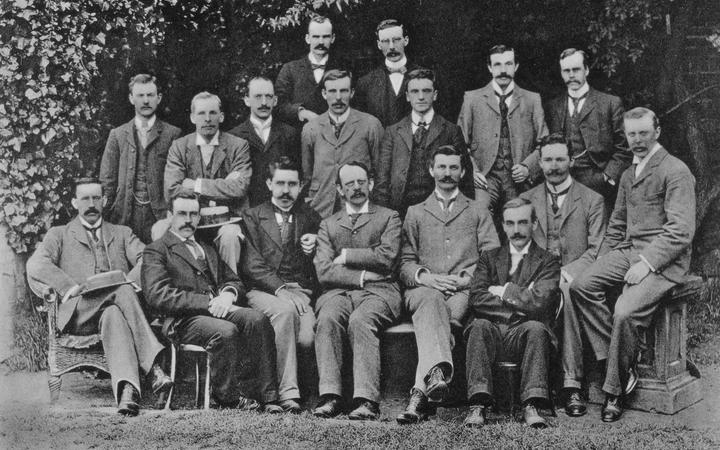 “So Rutherford worked with JJ Thompson developing quite clever experiments to try and use diffusion to determine what these objects were, but it was Thompson who did the fundamental experiment," Dr Campbell says.

“He deflected a beam of cathode rays, one way with a magnetic field, one with an electric field, balanced them out and from that showed they had to have a mass of less than 1000 times of an atom, the lightest known object at the time.

“Rutherford was working alongside him and he was of an immediate covert that there were things smaller than an atom, he couldn’t have been in a better place – the right man at the right place at the right time.”

With the development of Xray and radiation, Rutherford’s interest in these areas grew and in 1898 discovered that two different emissions came from radioactive atoms - alpha and beta rays.

After three years at Cambridge he found out that he couldn’t get another scholarship because of the rules and decided to go to Canada where he made further discoveries.

“It was really in Canada that he blossomed and did his first world-renowned works, he discovered radon, he discovered natural alchemy - that some atoms would send out a nuclear particle and become a different sort of atom.

“For that work, he was given a Nobel Prize [in Chemistry] in 1908, which is a bit of a shame because it was a year after he had left Canada, and it was the first Nobel Prize for research carried out in Canada.”

After taking up a position at Manchester University, Rutherford continued to invest his time in exploring the atom and set his students to further research on the reflection of alpha particles from metals. The results of which ultimately led to the creation of the “nuclear model” of the atom.

Meanwhile, when World War I neared its end, Rutherford corresponded on his findings.

“By December 1917, he could write to Neils Bohr [a Danish physicist] and say that ‘we’re attempting to split the atom by this method, regard this as private’, because it was a middle of a war.”

Despite his hard work and discoveries, Rutherford at one point was poorly regarded in New Zealand during the war when the atomic bomb dropped in Japan.

“Rutherford died in 1937, the neutron reaction that gave out energy wasn’t discovered ‘til two years after he died … The Americans had big write-ups on the people who had worked on it, the British had done the same… none of those mentioned Rutherford, quite rightly.

“The Canadian minister of mines had an article in the paper about Canada supplying geologists to search for uranium … and in the penultimate paragraphs he had this one statement that, it should not be forgotten that it was in Canada that Rutherford did his early works.

“Next day’s headlines in New Zealand had photos of Rutherford, New Zealander invents the [atomic] bomb, more or less. It’s only New Zealand that had that attitude, which is now gone pretty much.”