Behind every 40m kick, every stunning defensive tackle, and brilliant tactical move, Dan Carter worked his butt off. However, brilliant career as perhaps the greatest first five-eighth ever to play the game of rugby had dark times too.

He had injuries with heartbreaking timing and doubts about his own ability to overcome. His story is told in a new movie called Dan Carter: A Perfect 10.

“I guess a lot of fans, a lot of people who love rugby, don’t see that side of sport. They see the game every Saturday and they think ‘they’re doing what they love’, but they don’t understand the mental side of sport, the hardship, the self-doubt, the lack in confidence – which was a big part of my career and when you have injury setbacks or you’re out form it really takes its toll," Carter told Jesse Mulligan.

“And it took its toll on a number of occasions throughout my career so I didn’t have this glitzy glamorous career the whole way through, there were some real hardships. I was real lucky to have some amazing teammates, mentors, coaches, that helped me get through this.”

Starting all the way back from idolising All Black greats like John Kirwan at the first Rugby World Cup (RWC), Carter’s love for rugby was clear from the get go. He was able to build himself so successfully from the Southbridge Rugby Club that he later ended up being friends with the same players he looked up to.

“Seriously, I went straight outside after that game [RWC in 1987] and I would always be John Kirwan, I was like okay cool, I’ll score tries like John Kirwan. Through my teenage years it was Andrew Mehrtens … so I got to play alongside Mehrts, actually both of them, Sir John and Mehrts they are good mates of mine now."

His dad himself having played a bit of rugby with Wayne Smith, gave Carter goal posts coloured in the Southbridge Rugby Club’s ensemble at the mere age of eight.

“A lot of my success and the player I am today was off the back all those hours I spent in my backyard just having fun, kicking the ball around with my mates and dad.

“I always wanted to play for the All Blacks, it was a dream of mine, but I wasn’t training or doing that for that reason I was doing it because I loved it.”

While he did dream big, he says that from early on he had his doubts that he would make it when he was rising in the ranks.

“I felt like, in my opinion, All Blacks didn’t come from these small little towns, you don’t get seen … I was a good player in Southbridge [club] but if I went into the big smoke of Christchurch, the guys were twice the size of me and much better players than me, so why would they pick a little guy from Southbridge over some of these amazing athletes in Christchurch? I kind of shied away from it all."

People began to take note of Carter when he was named in the 2003 RWC squad.

Starring in the British and Irish Lions series in 2005, Carter ended the match with 33 points, beating the previous All Blacks record in a Lions Test. That was a special moment of realisation for him – it gave him a real taste of international play that he strived for more of, he says. 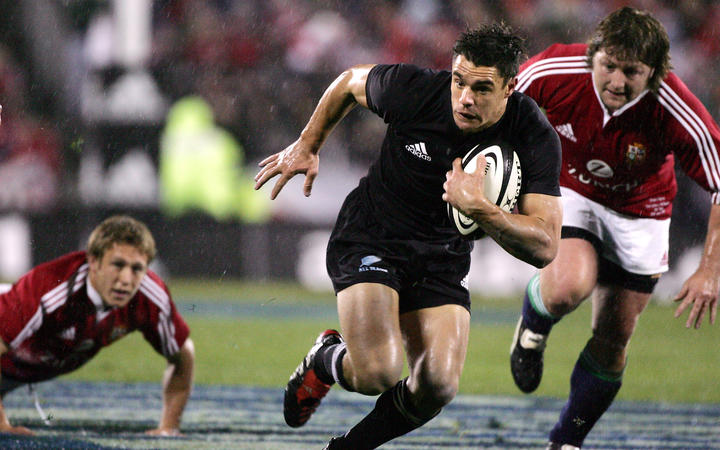 All Black Dan Carter slips the tackle of Jonny Wilkinson during the 1st test match between the New Zealand All Blacks and the British and Irish Lions at Jade Stadium in Christchurch,New Zealand in June, 2005. The All Blacks won 21-3. Photo: Andrew Cornaga/PHOTOSPORT

“As a sportsperson, you’re always training, working hard to have the perfect game and actually you never really have that perfect game, but that game was close, I missed one kick, hit the post in that game [against the Lions].

“It was just flow and everything I tried and everything I did was coming off, which is quite rare into those moments and it wasn’t ‘til after the game that I looked back and [thought] ‘okay that game was pretty special’ … I almost introduced myself on to the international rugby stage.”

From one step to another, the expectations only grew for the All Blacks and so the loss to France in the 2007 RWC came as a blow to the team, and resulted in the “most tears” Carter says he’s seen in that changing room.

“I always joked that if don’t win the 2007 World Cup, we won’t be allowed back in the country and I have to be some fisherman down the south of France or something, just to escape New Zealand.”

But he says the lessons from that loss were instrumental in pushing them to reclaim the title.

“The fact that they kept the same coaching staff on and the growth that we had in those four years, it was revolutionary, that was one of the biggest decisions at the time because the All Blacks do not just knocked out of quarter final time, it’s just something that cannot happen and heads must be turned, but the decision to keep that coaching staff on was a big part of the reason we had that success in 2011.”

Carter witnessed his hometown, which helped raise him to great heights, reduced to rubble in the 2010 Canterbury earthquakes. He says it was devastating for him and his dad, who was a firefighter helping in the recovery, and rugby played a role in that recovery too. 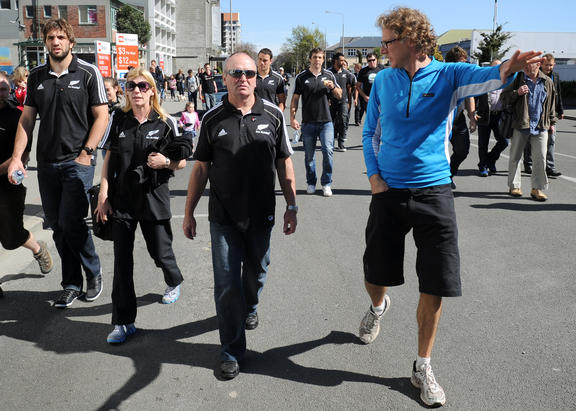 Roger Sutton (right), chief executive of the Canterbury Earthquake Recovery Authority (CERA) gives a New Zealand All Black coach Graham Henry (centre) and other All Blacks a tour of the devastation caused by the 22 February earthquake, in Christchurch on September 18, 2011. Photo: William West / AFP

“I never knew about that story, so I was watching that for the first time, I was almost in tears … [Dad] wasn’t able to sleep, so what does he do? He puts on probably the greatest game that I’ve ever played in the black jersey just to get away from those negative thoughts and images I guess that he saw.

“Through that season, it felt like we were helping people deal with their own trauma by just simply playing a game each weekend and by helping them not have to think about the hardships that they were going through for 80 minutes.”

Lancaster Park, his “favourite stadium in the world”, was also destroyed but Carter hadn’t been able to bring himself to revisit the place he cherished so dearly for its memories until the film took place.

“It was such an eerie feeling going in there, into the old grand stand … so that part of the film was quite raw and emotional for me but it’s something I’m really glad I did.”

After countless highlights and rising to be claimed the “highest paid rugby player” in the world, Carter met an unfortunate fate after a series of ill-timed injuries between 2013 and 2014. He says he didn’t play some of his best rugby in that time and thought about retiring.

“To an extent, I was okay, I’d achieved a lot in my career up to date and [thought] ‘I’m just going to retire’, my body is telling me something, it’s telling me to stop, that’s the struggle I was having. I would often go home to Honor and say ‘look I’m going to retire’ she’d talk me into not retiring, next day I’d full of confidence … couple of days later, ‘nah, my hamstring’s tired, I’m gonna retire’.” 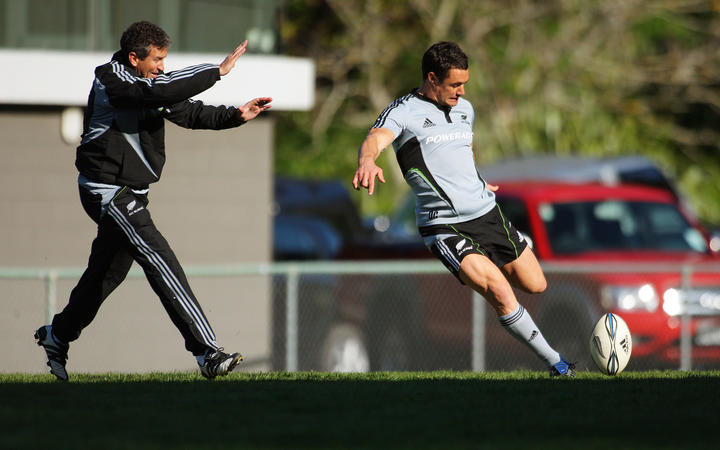 Back and forth undecided, Carter says he finally regained his strength when in 2015 Wayne Smith visited him.

“He had put together a montage of some of the highlights throughout my career and he said look I firmly believe in you that you can get back to this level. I was really struggling with some self-doubt at that stage and just to see that and to see a mentor like Smithy, take his time out to do that for me, I wanted to repay the favour to him but also it gave me confidence if he believes I can get back to that level … then I could.”

Carter went on to display a victorious and “Man of the Match” performance at the 2015 RWC. He says it was a fairytale finish that could only dream of.

“It was really rewarding after having a lot of setbacks, not just in those years [2013-2014], but also the previous three world cups, where I’d have injuries or losses at the key moments of the tournaments, it felt like it was all geared up to finishing on that note, which in sport it’s not guaranteed … I still get goosebumps just thinking about it.”

Carter took one special moment in his final international play for the All Blacks to remember his beginnings and roots.

“Going back to the backyard goal post, Dad would always be hounding me to kick off both feet, my preferred foot was my left … Earlier in the world cup, Aaron Smith was joking ‘have you ever kicked one with your right foot?’ I was like ‘no, but I’d love to because I always used to in my backyard’. He goes ‘imagine, we’re at the world cup final and we’re ahead by seven points, and you kick it with your right foot’ and I was like ‘yeah, yeah that’d be cool, good story’. 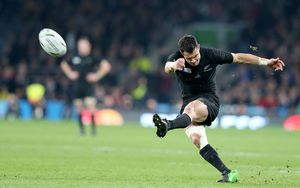 “I didn’t really think anything of it, then Liam Messam, he ran on the kicking team, he goes ‘Kick it with your wrong foot’ and I was like ‘yeah, great idea!’ and he goes ‘nah, nah, don’t, don’t! what if you-’ so I just quickly put it down and just quickly kicked it and it kind of almost took me back to my childhood. So it wasn’t in a cocky way where I was trying to rub it into the Wallabies or anything like that.”

Now that he’s stepped away, he says used the film as a way to reflect on and appreciate all the success he was able to reach in his career that “far outweigh the disappointments”.

“They filmed a lot about my time in France and Japan – the bright lights of Japan and fashion shows in Paris – you know how is this going to be put into context in the film? And I was actually a little bit worried, so when I watched it for the first time I thought there was an amazing balance of the life I lived.

“The reason that I’m having these opportunities is because of the work I’ve put in to reach the heights that I have in rugby career, and also the importance of my friends and family, but also my upbringing, and that’s what kept that humility and kept me grounded through all of this.”

And he’s hoping the film will carry an important message for his children when they grow up.

“I don’t necessarily want them to go and have the same life I did. But I want them to aspire to do something and be great at it and also to be able deal with challenges that are going to come along the way when they realise that it wasn’t all smooth sailing to get to where you want to. “

The nationwide release date for the film is 29 August.