Sixty-six years ago this week, a triumphant Sir Edmund Hillary returned to New Zealand after successfully climbing Mt Everest in May.

In today’s visit to the sound archives of Ngā Taonga Sound & Vision, we hear about the hero’s welcome that he received and his famous comment about ‘knocking the bastard off.’

Sir Edmund reached the summit of Mt Everest on 29 May 1953, with Sherpa Tenzing Norgay. When the news reached the rest of the world, it coincided with the coronation in London of Queen Elizabeth on 2 June. 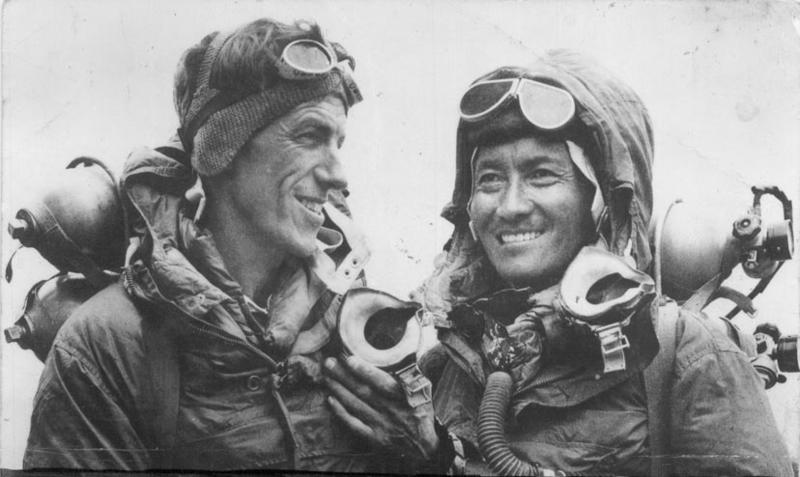 Edmund Hillary and Tenzing Norgay after summiting Mt Everest, 29 May 1953 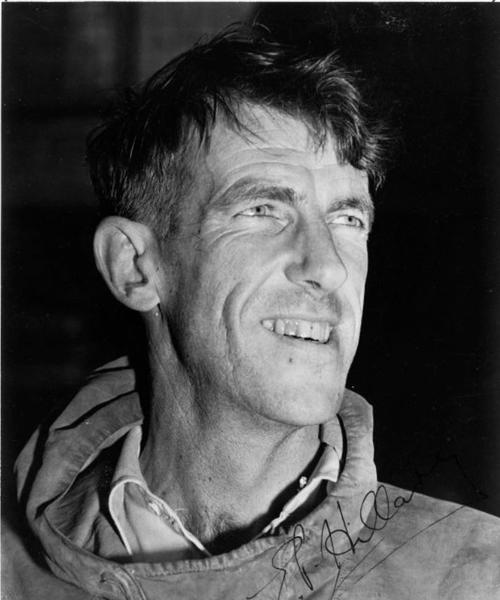 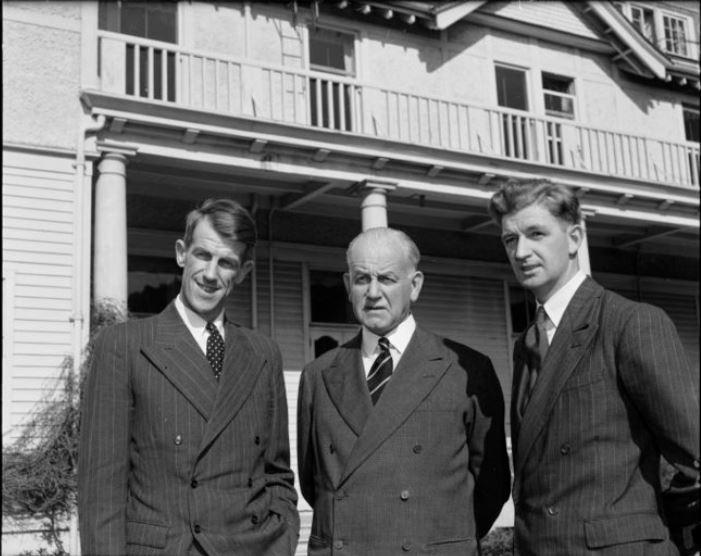 In New Zealand, the news was announced by acting prime minister Keith Holyoake, during the official local Coronation celebration ceremony in Wellington outside Parliament Buildings.

“And now, although it will break in to the normal programme of this service, I’m able to announce that a news flash has just come through, advising us that the New Zealander Hillary has succeeded in conquering Mount Everest. If the news is correct, and I’m assured absolutely it is, then our New Zealander, Hillary, has climbed to the top of the world … and what a magnificent coronation present for the Queen.”

The expedition to Everest that Sir Edmund and Norgay were part of, was a British-led mission – and shortly before he set off for London in early 1953, Sir Edmund was interviewed for radio. He had already been to the Himalayas twice and the interviewer was trying to find out what was the appeal of Everest.

“What would do you think perhaps would be an ideal quality for an Everest climber?” the interviewer asks.

“Well I suppose it’s necessary to have a certain amount of experience in mountaineering,” Sir Edmund says. “But I really think the most useful quality is the ability to be miserable for a long period, for no apparent reason at all, just to be miserable.”

Asked about his objective in reaching the summit, he says: “I haven’t the faintest idea of it … I don’t know, I think it’s just a bit of a personal challenge, I suppose. You sometimes wonder when you’re at heights of over 20,000 feet and feeling thoroughly miserable whether it’s worthwhile at all. But as soon as you come back … you feel the urge to go again.”

The expedition returned to London and Sir Edmund and the team leader, Sir John Hunt, were both knighted by Queen Elizabeth II.

It was also reported widely, and famously, that upon descend of Mt Everest Sir Edmund said “we knocked the bastard off.”

There is no recording of him saying this but in July, a BBC radio documentary about the expedition - which key members of the team took part in – George Lowe repeated the statement.

“Wilf [Wilfred] Noyce and I, were waiting for them on their return to the South Col, I remember how tired they looked coming down. They moved down the couloir, feeling for their steps, with legs stiff and walking like toy soldiers. Ed came up to me and I was sheltering against the wind, I was crouched over a thermos, he took off his mask and he said ‘well, we knocked the bastard off’. But his remark wasn’t cocky, he was more amazed and incredulous.”

It was momentous enough that the word could be used on air on the BBC at the time.

Sir Edmund also featured in the documentary and described the moment they arrived to the summit: “The summit was a symmetrical beautiful snow cone, Tenzing threw his arms around my shoulders, and we thumped each other on the back until we had no breath left. I glanced at my watch it was 11:30[am].”

After being feted in London, the two Kiwis made their way back to New Zealand in August 1953. They landed at Mechanics Bay, which in the era of flying boats, was the centre of international aviation in New Zealand until the 1960s, when the new airport at Mangere took over.

“This afternoon Sir Edmund Hillary and George Lowe, New Zealand members of the British
Everest Expedition, arrived back in Auckland, by flying boat from Sydney. 1YA commentators were in the large crowd that gathered at Mechanics Bay to welcome them,” Auckland station 1YA reported.

“Crowds have been gathering for a long time … It’s going to be a real Auckland welcome for a real Aucklander …. the flying boat itself has touched down, and its right down here in front of me now.

“This is it, this is really the moment of incredible adventures and courage, Sir Edmund and George Lowe are back home. He and George Lowe, these two modest heroes and yet what a moment this is, what a thrill to all of us here. A moment we shall always remember. He kisses his mother, and what a proud woman she must be. He shakes hands with his father, what a proud man he must be. Cameras flash, he smiles modestly, streamers are thrown over him, he grins that wide grin which is so familiar to all of us from the newspapers.”

Another person reporting for the station at the scene followed up with Sir Edmund.

“At the present moment, they’re standing there, poor fellows, with flash lights, blinding them practically. They’re looking tired, we heard they’ve been tired and we’re now seeing it with our own eyes, because it must’ve been most exhausting for them, these series of welcomes, nothing but welcomes, the press are right ‘round them. Sir Edmund … why didn’t you tell us before you left that you were going to get to the top of Everest?” the reporter asked.

“Well I wasn’t quite sure when we did leave actually that we were going to get to the top, however, I may say that both George and I packed good clothes to take with us to England, just in case we did get to the top,” Sir Edmund replied.

Asked about his impressions two months after this achievement, Sir Edmund said: “I think my impressions now are very much the same as they were when we reached the top. I can remember very distinctly that we had three very clear feelings – one was the sense of relief that we had reached the top, found it, the second was certainly pleasure in being there, but last, and keenest of the lot, I think was the tremendous desire to get down again.”

He also talked about Norgay’s charm and reaction.

“Tenzing’s an extremely pleasant chap to work with… he’s really quite charming, I don’t quite know [if] he’s had a tremendous time as we have since coming out to civilisation, and I think at times he’s perhaps felt a bit overwhelmed but when I last saw him and we said goodbye, he just seemed the same old Tenzing that we’d known on the mountain.”