The Godzone Dictionary: A language guide for non-Kiwis

Sweet as, yeah nah, heaps, aroha, hard case - Kiwi vernacular is pretty unique. Whether it be slang or common Māori phrases, for visitors to the country, it can be hard to keep up.

Language expert Max Cryer may have a solution for those interested in finding out what is specific to Kiwi slang or new to it. He’s written a guide to speaking like a New Zealander with The Godzone Dictionary.

The reissue of this edition of the book from 12 years ago updates phrases to keep up with the times. 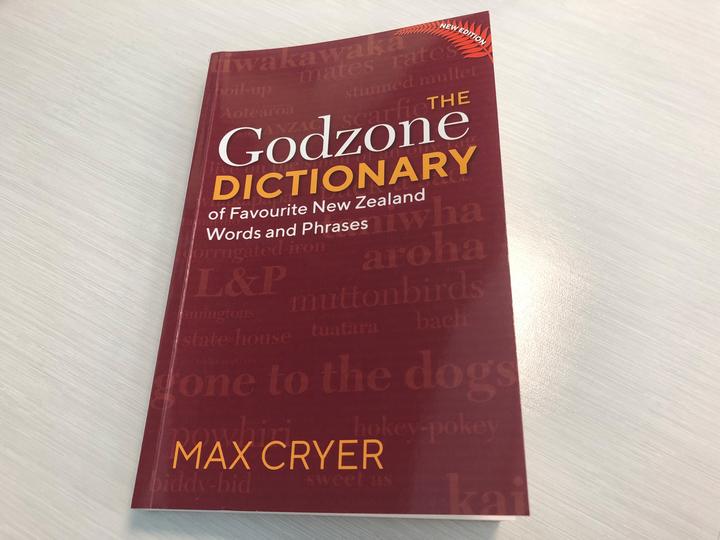 “That’s got several mentions of the queen, who's now 93, and you're coming out in the middle of this year. I mean, how embarrassing if the book said Queen's Birthday, and so I had to change it to sovereign’s birthday, in case of,” Cryer told Jesse Mulligan.

“Then you see ‘x’ years ago, if two people weren't married, but lived together, the legal phrase was that they were in de facto, they were in fact together but not in law.

“Well, we now have a prime minister and a deputy prime minister, both of whom live with someone they're not married and they’re called partners. So I had to revise that whole paragraph.”

Quite commonly in the so-called Godzone, Kiwis will often flip the middle and end parts of a word – also known as metathesis.

“You will hear people say, aks. When they actually meant to say is ask. But they put the middle back to front,” Cryer says.

“And it also happens with Māori words, New Zealanders often talk about Manuwera when they mean Manurewa. And there's a tourist firm that runs buses with a big slogan on the side saying travel with us to Cape Rienga, which is actually Cape Reinga.”

Kiwis are also quite fond of hypocorisms – or baby talk – in our everyday conversations, he says.

“We quite often as adults talk about drinkies or somebody who's cooking will tell you that something is crispy.

“It's baby talk, because we talked about throwing a sickie, and at Christmas time you often get pressies or meet your friends for drinkies.”

The guide might even be useful to English speakers who come to New Zealand and are confused by the different use of words, or words they didn’t know existed altogether.

“There are so many words that we use here that are simply unknown elsewhere, like we have takeaways, but they're called to go in most countries ‘to go’ or ‘take out’,” Cryer says.

“And English people are quite puzzled when New Zealanders talk about a shopping mall because they're all named after pall-mall in London, which itself is named after the Italian word for croquet, palla maglio.

“Which now at the end of it has a rather important house, number one [The Mall Road in London] is Buckingham Palace.

“We talk about putting our feet into the slippers. And that word is completely unknown in most countries they’re called mules … And sometimes men in New Zealand wear braces to keep their trousers up, but they’re called suspenders everywhere else.

“And of course, we had a prime minister who couldn't pronounce the word women so he invented the phrase men and woman of New Zealand and that's now quite common amongst New Zealand’s language to say you know the woman over there when they actually mean the women over there.”

There’s also been changes to words among New Zealanders that people might not have noticed. One of which was contractor and contractees, in a similar fashion to employer and employees.

“For some extraordinary reason, people working on a contract hate being called contractees, employees don't mind being called employees. But people on contract call themselves contractors,” Cryer says.

“And another change which is taking over is that, as of quite recently, no-one ever has a breakdown. If there was no power whatsoever in the whole District of Otahuhu, it is referred to as an outage. Nothing's broken down. It's just out.

“And I also heard an announcement the other day about electric blankets were being manufactured for New Zealand and imported from offshore. Now, offshore means away from the beach a bit, out in the water, you know, an island that you can see.

“And I had a mental image of a barge out by Waiheke Island with ladies with sewing machines making electric blankets but it's now used commonly to mean in a foreign country.”

He says one of the funniest situations is when people use the word bathroom when they mean toilet.

“Americans are terrified of the word lavatory or toilet that under no circumstance will they say either of those words. And nowadays this has become bathroom, which is ridiculous because there's never a bath in it.

“When I took a flight on Air New Zealand recently … and the announcement came ‘would passengers please not use the bathroom because we will be taking off momentarily’. Now number one, the bathroom is a laboratory in one metre square spot with a loo in it, and momentarily means for a moment, going off and then coming straight back down.”