DIY coffins are becoming popular around the world but the coffin club trend really started here in New Zealand, in Rotorua. Now there are clubs all over the country.

The Katikati coffin club has been running for 5 years and boasts more than 200 members. Its treasurer

John Russell says it’s is not a morbid affair but rather a social way to get one's affairs in order. 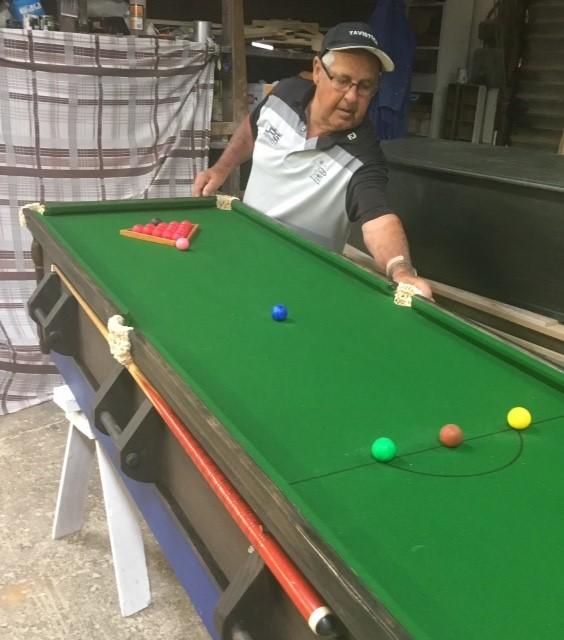 Snooker table coffin made by one of the Katikati Coffin Club members Photo: John Russell

The club gets together every Wednesday morning to make the coffins.

The club isn’t in the business of making and selling the coffins to the public but a space where people can discuss death and dying with their family and let them know their wishes for after they’ve passed.

People attending the coffin club weekly meeting can get a measure and quote for a coffin and plan their last farewell in a final wishes workbook. It can be anything from whether you’ve returned your library books to whether you’re wanting to pass on smaller items to particular people.

“When someone passes away the family can become vulnerable, they might want the best but the person wouldn’t have wanted the best.”

Russell says the club is there to complement funeral businesses.

For his 70th birthday, Russell had a wake. It was a funeral service while he was still alive, he says.

“It was absolutely wonderful.”

He says he was there to enjoy it rather than being in a box and not hearing a thing.

“In fact my two grand daughters, they were too young to talk but on my 75th birthday a couple of weeks ago they actually did their eulogies then too, which is pretty special.”

The club has 219 members, of which 21 people have died. There have been people who have joined and passed away within a week, Russell says. In those instances the club has finished the coffin and delivered it to the family who then decorated it.

The families say helping to decorate the coffin was one of the most healing experiences they’ve had.

The coffins have to be made by council specifications, for example in Tauranga, they have to be “glued and screwed”.

“There’s a lot of dos and don’ts but it’s quite simple once you get to know.”