Paul Jeune: how to become a professional skydiver

Paul Jeune regularly jumps out of a plane, in fact he’s done so almost 8000 times. 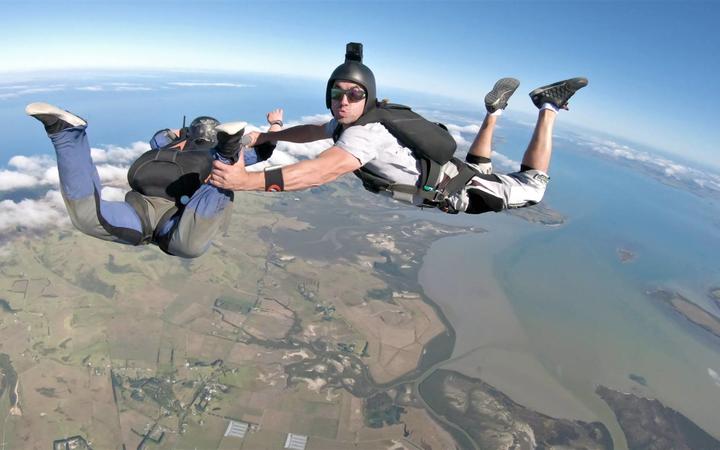 Jeune is the main subject of a new TV series on The New Zealand Skydiving School which follows a group of students training to become professional skydivers. The show, High School, is soon to screen on TVNZ on demand.

Jeune was “big into fitness” in the UK but after suffering from burnout he wanted and change. He googled skydiving and found a course in New Zealand – the course he now teaches.

He says skydiving is much more of a business here, whereas in other parts of the world it’s just thought of as a sport. As Jeune puts it, New Zealand is the mecca. And people want bragging rights to say they’ve done it here.

Jeune did his first jump in Australia in the early 2000s but didn’t think much of it until he was looking for a career change. His first jump was “horrifying”.

“Skydiving is something we describe as the anticipation is far worse than the event, you think it’s going to go a certain way and it doesn’t go that way."

There’s no age limit for skydiving in New Zealand, he says.

“For a tandem skydive, where you’re strapped to an instructor, you could take a new born baby if it was big enough,” he says.

Jeune cuts his age limit at 14-years-old though.

“The way I describe it, if I said to my six-year-old ‘the next doors have just got a velociraptor, do you want to go play with it?’ he would say ‘yeah, absolutely’. Even though he’s going to get torn to death he’s going to go. The kid doesn’t know, it’s generally an over-zealous parent that’s driving it.”

After about 100 jumps people tend to relax a little bit, he says.

If you go to Jeune and you’re keen to learn how to sky dive, first you’ll have to do a full week immersive course on ground preparartion. To get into that, you need to go through an interview process. The kind of people instructors want to avoid are one’s that describe themselves as adrenalin junkies, he says. He calls it risk mitigation.

And once you’re on the course, you’ll be put in uncomfortable situations because of the immense amount of stress a jump creates, he says. “There’s nothing harder.”

“Skydiving itself is easy, literally a potato could do it if it had arms, legs and a head. If you can put your hips forward and put your head back, you can skydive.”

But you need to overcome the primal instinct that says you shouldn’t be doing it, he says.

During the course you’ll be put in a harness and go through a simulated malfunction – it’s called a hanging harness.

Of course, a lot of people ask about what to do if the parachute doesn’t open. Back in the day, that would have been a legitimate question because the gear wasn’t very good, Jeune says. But now days, he says it’s flawless.

The parachute not opening does happen – in about one in every 800 jumps - but Jeune says there’s a backup parachute on every jump so it’s about learning how to activate it.

When you’re on the plane, it’s about trying to control your stress levels. “We’re trying to keep them calm, as I say, you’re half instructor, half psychotherapist.”

And just because you’re up in the air, it doesn’t mean you’re going to jump. If the wind is too strong, you won’t jump. If it looks as though jumping is going to negatively impact you, you won’t’ jump.

He says people waiting for their jump have the look of “absolute paralysing fear” when they’re in the door of the plane.

When the door opens, is when things get real, says Jeune.

Paul Jeune is the main subject of a new TV series on The New Zealand Skydiving School which follows a group of students training to become professional skydivers. The show is called High School - which is soon to screen on TVNZ on demand.