Very few people can break the internet with a cookie recipe, but Alison Roman did.

She’s one of the hottest food writers in the world at the moment - her recipes have the three ingredients that are essential for success in today's crowded cookbook market; they're cookable, Instagrammable and delicious.

Roman’s style steers clear of fussy and is inspired by the joy of feeding people. 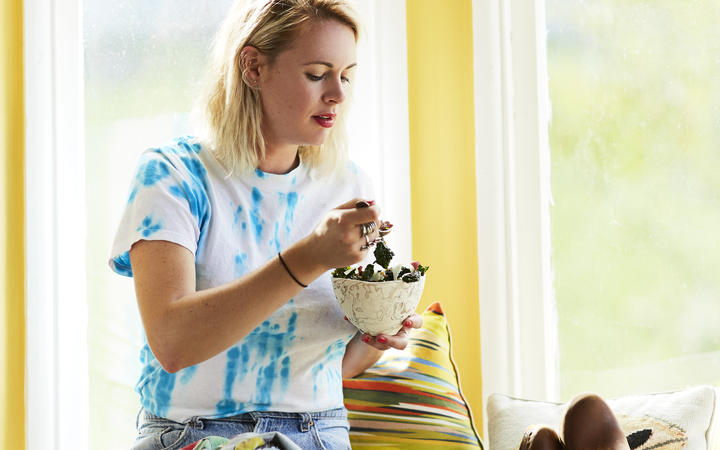 Run-of-the mill boredom led her from her studies in political science to where she is today.

“I was spending all of my time reading cookbooks and then coming home to cook.”

She thought if she chanelled this enthusiasm into a career, she could always go back to college if it didn’t work out.

Roman’s mum was less than thrilled, but 12 years ago, food and restaurants weren’t as widely hyped and celebrated as they are today, so she understands why.

“It was a different industry and I think it was kind of thought of as you cook in a restaurant if you can’t do anything else.”

But Roman knew she was good at it, or at least would be good at it one day, and she wanted to see how far she could take it.

Day to day working in restaurants though didn't suit her, she says the only feedback from customers was if they really loved or really hated a dish.

“Now, with writing recipes with my column and my books, I not only get to feed people, but I get to teach them.”

She got a job working as a recipe tester for Bon Appetite magazine.But things fell into place when she started to devise her own recipes - trial and error led her to her find her own voice.

It’s a low-fi approach to cooking, she says.

“If it were up to me I’d listen to records instead of the internet…I’m not super into the new way we do things in most aspects of our life but especially in regards to cooking.”

Funnily enough, the internet has been extremely useful for Roman.

She’s had many recipes go viral online, like Salted Butter and Chocolate Chunk Shortbread; Why Would I Make Another Chocolate Chip Cookie Ever Again? She’s says surprised it’s become such a famous recipe.

“For me it’s a pretty simple and basic cookie recipe and you also need a mixer, like it’s not that accessible… it is extremely delicious, I will say and every time I talk about them I wish that I had one right now.”

She was dissatisfied with the standard chocolate chip cookie.

“I just don’t think they were that good, I think that they’re too floury and there’s also too much room for divisiveness because you’re either a chewy and soft middle cookie person or a crispy edged and custardy centre or a hard chocolate chip cookie person or like the thick hockey puck style or the thin…a lot of people have a lot of opinions.”

The shortbread is a different beast entirely, she says.

Again, she has no idea why another of her famous recipes Spiced Chickpea Stew With Coconut and Turmeric is so popular.

“The cookie I can understand from a few points of view, but the stew, I think that it was helpful that so many people had already known about the cookie. I already had recognition for one thing and it kind of just snowballed, after a few people started making it I noticed and started promoting their pictures and calling it out and encouraging other people to make it.”