Songs of the Sea

We asked you, our audience, to share your favourite songs of the sea with us. We've taken the most popular picks, as well as the ones we like the best, and here they are... 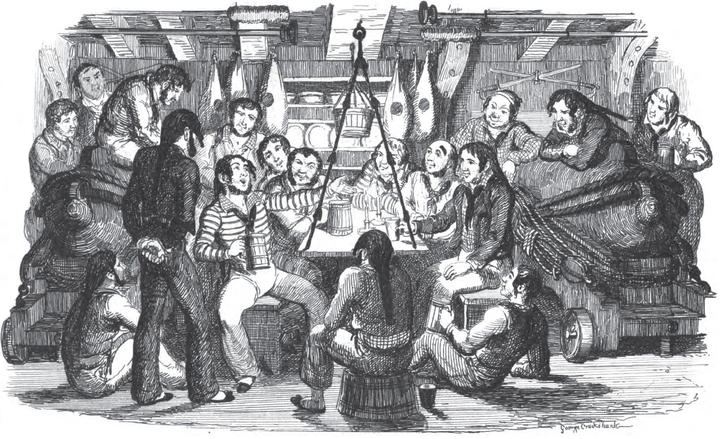 Saturday Night at Sea: An illustration from the book "Songs, naval and national" by Thomas Dibdin, 1841. Photo: Pubic Domain/Illustration by George Cruikshank (d. 1878).

We are not just talking sea shanties, but it is probably where we should start, given how far back they go - the origin of shanty is believed to be the French word chanter, which means "to sing".

It's believed the word shanty was introduced in the mid-19th century to describe a work song sung by those on merchant vessels.

The style was often call and response - think ‘What Shall We Do With The Drunken Sailor’. The shantyman was a regular sailor who led the others in singing.

Irish folk revival groups - which had no real links to maritime music as such - started adapting shanties last century, which has lead people to associate shanties with Irish music.

Here's one of the popular suggestions from that era, The Dubliners performing 'Fiddlers Green', sung by Barry McKenna.

Another popular Irish ballad is ‘Shoals o Herring’, a fisherman’s song, which a few Irish folk bands performed, but it was this version by the Corries that got the most votes.

American folk musician Tim Buckley wrote ‘Song to The Siren’ (with lyrics by Larry Beckett) in 1967, and it’s become an extremely well-known song about the sea, thanks in part to its later cover by the band This Mortal Coil in 1983.

But no one suggested that version, you all wanted Tim Buckley's beautiful original:

You can also hear that Irish folk influence in another sea song suggested by quite a few listeners, Billy Joel’s ‘The Downeaster Alexa’ from 1989. It’s sung from the point of view of a fisherman struggling to make ends meet due to the depletion of fish stocks.

“I did my master’s in marine biology in Woods Hole on Cape Cod in the USA and, one night in the lab at about 2am this came onto the radio and half the lab tried to sing along. Apparently everyone knew it but I just sat there, floored, asking "Who the heck is that and what's that song called".  I have loved it since.

The whole of the eastern seaboard of the US is full of whaling towns and fishing towns that the locals can't afford to live in anymore and this speaks to that and the precariousness of trying to earn a living from fishing in an area where big fish are now scarce. The baseline is absolutely the chop of the sea - a bit more Southern Ocean than George's Bank I reckon, but that's OK. Oh, and the violinist on the original is *just* Itzhak Perlman!

‘The Downeaster Alexa’ was sung from the perspective of a sailor, but many sea songs come from the point of view of the person left behind by someone who has crossed the oceans, for example ‘My Bonnie Lies Over the Ocean’

Sinead O'Connor had a go at one of these with the song ‘Jackie’.

Perhaps this is why many of these sea songs are so sad. A person left behind, mourning the loss of a loved one at sea.

In 2012 King Creosote and Jon Hopkins did a slightly different take on this with 'John Taylor's Month Away', where the person who stayed behind is glad they did, with the lyrical refrain “I'd much rather be me”.

We received a few suggestions for songs that mention the sea in a more metaphorical way (for example All About Eve's beautiful song 'Martha's Harbour') but are really just about love, so we've restricted our selection to songs where the main story or focus is the ocean... This is one you'll surely know - from 1980, by Christopher Cross.

We got quite a few suggestions for New Zealand songs of the sea. We're not playing ‘Anchor Me’ for the reasons  mentioned - it's more metaphorical in terms of the sea, and you already know ‘Six Months in a Leaky Boat’, but here is ‘Coming Up for Air’ by the Able Tasmans from 1993:

And yes it might surprise you, but there is at least one heavy metal sea song!

Iron Maiden's ‘Rime of the Ancient Mariner’ was inspired by and based on the 1797 poem of the same name by Romantic poet Samuel Taylor Coleridge.

Bonnie Prince Billy is Will Oldham an American singer-songwriter and actor. He and Matt Sweeney recorded ‘My Home is the Sea’ for the 2005 album Superwolf.

We're going to end with a song from Kate Bush's album Hounds of Love. Side two of the album was called the Ninth Wave. It consists of seven songs that tell the story of a young woman adrift at sea, waiting to be rescued. This one is ‘And Dream Of Sheep’

The vocal for the song's video was performed live while filming Kate lying in the huge water tank at Pinewood Studios. This was to create a sense of realism, as the character in the song is lost at sea. However, she spent so long in the water during the first day of filming that she contracted mild hypothermia. She recovered after a day off and carried on filming. Everyone agreed it had added to the authenticity of the performance!

'The Wreckers Light' is an affecting, trad-sounding folk number by Dark Tower (featuring David Lloyd) from 1998's Shadows on a Flat Land.

Shine on the craggy rocks where sea birds fly, where mighty cliffs do rise

When loved ones stand and watch and prey for sailors on the ocean,

How do sailors know what light is burning on the sea shore?

Is it the light that guides them home to arms that keep them warm?

To destroy their ships on rocks and steal away their lives.

Shine your light so ships can see you on the ocean

Shine your light to all the sailors on the sea

Shine your light to lead them safely through the waters

Shine your light to guide them safely through the night