Sarah Cooper: How to Be Successful Without Hurting Men's Feelings 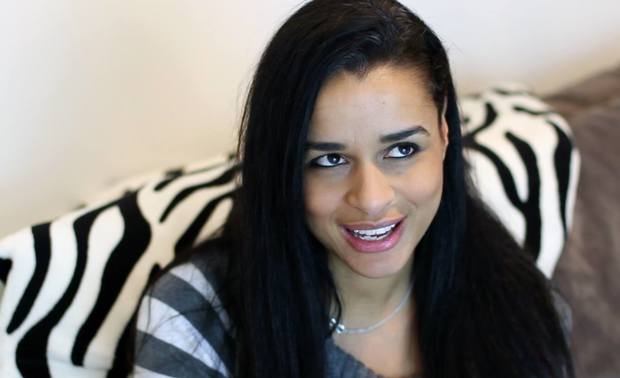 Advice to pepper emails with exclamation marks and emojis to seem more approachable is just once piece of advice in Cooper's satirical workplace guidebook How to Be Successful Without Hurting Men's Feelings.

She says that although working for Google may be a dream job for many, her dream for a long time before that has been stand-up.

“When I joined Google I was coming off of a stint of three years trying to be an actress and finding stand-up comedy and trying to be a standup comedian and then eventually becoming $20,000 in credit card debt and really needing to find a way to actually make some money,” she says.

“An old colleague of mine from school recommended me for the job and I remember getting the call that I had gotten the job and just feeling like I was giving up on my dream.

“As far as nine-to-fives go Google is the best place to work so it ended up being okay.”

She says she was nervous about the release of the article.

“I was really surprised that people would come up to me and say how funny it was. All of a sudden people were like ‘oh you should write about my meeting trick, I have a trick to look smart, why don’t you put that in your next post’.

She says Google was full of very smart people, and her sense of humour was a good fit.

“The smartest people are funny - sometimes intentionally, sometimes unintentionally - but I think the cool thing about Google is they really had no qualms about making fun of anything and everything.

“Actually that’s the thing that I miss the most about working in the corporate world now is that I don’t get to be in that environment anymore and don’t get those awesome situations to make fun of.”

However, she says there was real double standard, and some things about the experience still sting.

“I was chosen to give a presentation in front of the whole company which is a huge honour that not many people get.

“I remember being told in front of my entire team that the reason I had been picked to give the presentation was because they needed diversity - because I was a woman and because I was a black woman.

“That was incredibly infuriating and it still pisses me off to this day, because you want to be recognised for doing a good job and for working hard and for deserving it because of that and not for these other reasons. It’s seemingly small but things like that you just don’t forget.

From the chapter, 9 Non-Threatening Leadership Strategies for Women Photo: Supplied

“Eighty percent of people in tech don’t think that there’s a problem with sexism in tech - and the rest are women.

She says she uses humour partly as a way to get people to think about their actions and maybe change some of their behaviour.

“My brand of humour is really about observation - so I’m not really telling people what to do, in fact a lot of my advice I’m telling you to do the opposite.

“A lot off the things that I’m doing is just holding up a mirror and saying ‘this is what happens’ and so it’s really up the person who sees it to say ‘Oh I recognise that and maybe I’d like to change it’ ... or not.”

Always use a ‘sent from my phone’ email signature

“Even if you aren't’ sending from your phone - that makes you look like you’re always busy and on the go, and it gets you out of proofreading because hey, you’re on your phone.

Add private events to your calendar

Have your email send out in the middle of the night

“Everyone thinks you’re up late thinking about the future of the company, what a competitor is doing or the status of a contract and things like that.

Complain about how many emails you get in the right way

“I was once talking with a coworker and he said that he got a lot of emails and I said ‘well I have a hundred’ and he said ‘I have 200’.

Use lots of emojis and exclamation marks in emails

“This one is fascinating to me, I find that I put a lot of exclamation points and smiley faces in my emails just to seem more approachable and likeable and nice, and a lot of women have written me that they do the same thing but they’re going to try to stop doing it so much.

“You’ll see women write things like ‘xoxo’ or ‘Happy Monday’, especially when they’re trying to say something negative. It’ll kind of get shrouded in flowery language or emojis to make it seem more nice."

“Another great one is if someone steals your idea - you’re in a meeting and someone repeats what you just said - it might be tempting to say ‘that’s exactly what I just said’. A better way to do it would be to say ‘thank you for articulating that so clearly’ so that, you know, nobody thinks you’re too angry about it.

“And let’s face it - if a man didn’t repeat what you said no one would have heard it anyway, so it’s really best for the team…

“It might be tempting to say ‘I already know that’ or ‘I’m the one who explained this to you’, the best thing to do is just say ‘thank you so much for explaining this to me, I would love it if you explained it to me again. And as he’s explaining it to you, you can think of how to maybe avoid that person in future."

“It’s very confusing and the more you fight it the crazier you seem.

“You don’t want a resume that screams ‘I’m female’, you want to make it seem as gender neutral or even as male as possible. SO if you use initials instead of your first full name, don’t use pronouns like ‘she’ or ‘her’, or use an email address like ‘yeahboy23@gmail.com’.

“Sprinkle words like ‘gamechanger’ throughout, write down in your interests that you’re very interested in whisky or IPA or golf or sports.”

Don’t show up to meetings

“I found it was a way to make myself feel like important - if I didn’t show up and then I got an instant  message ‘Hey, we really need you here’ and if I didn’t get that instant message, that just means that I didn’t really need to be there.”

How to Appear Smart at Meetings

“One of my favourite ones is to translate percentages into fractions, so if someone says ‘25 percent of people clicked on this button’ you say ‘oh, so about 1 in four’, and people will be really impressed with your quick math skills.”

“Another great one is just to ask ‘will this scale’ no matter what it is. Just ask ‘will it scale?’ - no one knows what it means but it definitely makes you look smart.”

“Everybody will think you’re going to brilliantly point out something on that slide that everyone else missed but you can just kind of look at the slide and look like you’re adding up some numbers and you can go ‘okay, yeah, we can move on’.

Walk around with an open laptop in hand

“That is the sign of someone who cannot stop working and is always productive and is maximising their productivity at every second.”