Jesse Mulligan asked people to tell him their favourite TV theme, and was inundated with suggestions. We've managed to narrow them down and counting down the top 15. 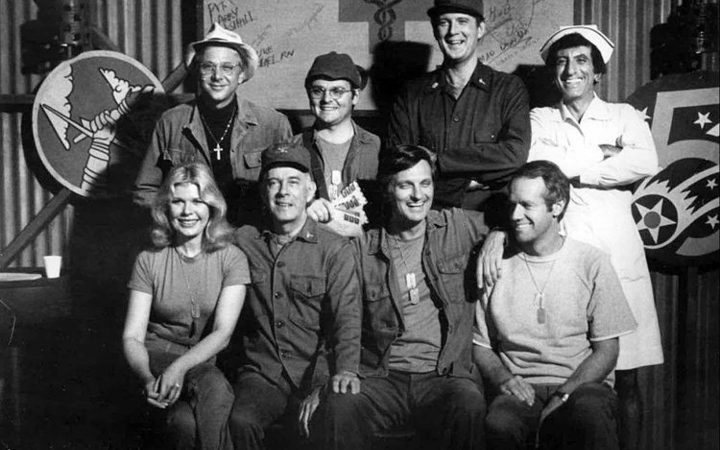 The Mary Tyler Moore Show ran for seven seasons between 1970 and 1977. Moore was cast as Minneapolis TV producer Mary Richards. The character defied traditional archetypes as she was unmarried and career focused, a rarity on TV at the time. Her strong independence led to the character becoming somewhat of a feminist icon over the series’ run.

The show’s encouraging and optimistic theme ‘Love is All Around’ was written and performed by Sonny Curtis and set against various locations around Minneapolis. The intro sequence and theme were almost as influential as the show itself, spawning numerous parodies and covers, notably by Joan Jett and Minneapolis punk band Hüsker Dü.

This fish-out-of-water comedy followed New York City attorney Oliver Wendell Douglas as he dragged his wife away from her glamorous city lifestyle to a dilapidated farm so he could live out his dream of being a farmer.

The upbeat theme tune written by composer Vic Mizzy, explained the basic premise of the show and the conflict between the two main characters in the lyrics.

This beloved comedy/drama series followed Ralph Hinkley (though two episodes in, the character’s name was changed to Hanley to avoid association with John Hinckley Jr after his attempted assassination of US president Ronald Reagan), a Los Angeles public school substitute teacher. He is given a suit by a group of aliens which gives him a huge array of superhuman powers… but he immediately loses the instructions.

The show’s theme ‘Believe It or Not’ was again written by Mike Post with lyrics by Stephen Geyer. Sung by Joey Scarbury it reached number 2 on the Billboard Hot 100 in June 1981. Arguably the song has had more cultural impact than the show over the years. It was prominently used in Judd Apatow's The 40-Year-Old Virgin in 2005 and was the basis for this classic Seinfeld joke.

Regarded as one of the best cop shows to ever grace TV screens, Hill Street Blues was created by Steven Bochco (who later co-created L.A. Law and NYPD Blue) and Michael Kozoll. It followed the staff of the fictional Hill Street Police station. The show was a ratings disaster at first but critical acclaim and a host of awards kept it alive. It’s remembered for talking thorny issues such as police corruption and racism as well as its technically innovative production.

Mike Post, who also wrote the themes for The A-Team, The Rockford Files, Quantum Leap and NYPD Blue, was hired to write an opening theme that was more poignant than the tougher sounding music usually used on TV Cop shows. The theme was a hit and even earned Post two Grammy awards in 1981.

Developed by legendary television writer and producer Norman Lear, One Day at A Time told the story of Ann Romano, a single mother raising her two daughters in Indianapolis. It was the first time a divorced, working mother took a leading role in a comedy and like many of Lear’s other productions One Day at A Time tackled some serious issues.

The show's theme ‘This is It’, was composed by ‘River Deep – Mountain High’ co-writer Jeff Barry and his wife Nancy and was performed by Polly Cutter. The show was reworked in 2017 with the family portrayed as Cuban-American and the Barry’s theme was also given a more latin feel.

Based on the life of the show’s creator Earl Hamner Jr, The Waltons is about the family of John Walton Jr. (known as John-Boy) and their life in the years between the great depression and the end of the second world war. Though the show dealt with its fair share of loss and tragedy, since it went off the air the poor but close knit family have become synonyms for a simpler, gentler time in America’s past.

Oscar-winning composer Jerry Goldsmith had to re-write the theme music as the show’s producers thought his original attempt was too gentle. The theme opened the show and was also played under the famous closing scene where one by one the lights in the house go out as the family bid each other good night.

Taxi ran for five seasons between 1978 and 1983, and focused on the employees of the fictional Sunshine Cab Company. The show featured future stars such as Christopher Lloyd and Danny DeVito in their first prominent roles and also provided absurdist comedian Andy Kauffman a showcase for his character of Latka Gravas who became an audience favourite.

The theme is Angela, by musician Bob James. A melancholy instrumental piece originally composed for a guest character in the third episode, it wound up better suiting the tone of the show than James’ original theme. Writing for the AV Club, Erik Adams said of the theme “’Angela’ is like the unseen cast member, the bleary-eyed sound of tires splashing through puddles and street lights streaking by cab windows.”

Action crime drama CHiPs was an action crime drama based around the exploits of two California Highway Patrol officers and often featured the protagonists chasing bad guys on their motorbikes. The show’s stars Larry Wilcox and Eric Estrada were only novice motorcycle riders (with Estrada only earning his licence years after the show had finished) so their occasional work related injuries often had to be written in to the show.

The "CHiPs" Theme was written by John Parker and was described by musician, producer and music historian Skip Heller as the “perfect late '70's cop-show timepiece-the ultimate example of its type.”

This BBC children's drama was centred on the fictional comprehensive school Grange Hill (not to be confused with the real place in the east of London). The show dealt with a lot of the troubles that students at real schools would have to confront. It also dealt with some more hard-hitting subjects not usually seen in children's dramas, such as racism, heroin addiction, teenage pregnancy and AIDS.

The original theme music was a track called ‘Chicken Man’ by Alan Hawkshaw. It was not written specifically for the show but rather as part of a library of music to be used when needed by various TV companies. Strangely enough a different recording of the song was also used as the theme for game show Give Us A Clue at the same time as Grange Hill.

This 70s sitcom is best remembered for providing the breakout role for John Travolta. Gabe Kaplan played the title character, Gabe Kotter, a teacher who returns to his high school in Brooklyn, New York, to teach an ethnically diverse remedial class called the "Sweathogs". At first antagonistic towards each other Kotter and the “Sweathogs” grow to like each other over the course of the series.

The theme, ‘Welcome Back’ was written and recorded by former Lovin' Spoonful frontman John Sebastian. It was released as a single and reached No. 1 in the spring of 1976. The show was originally going to be called Kotter, but that was changed because of the song’s lyrics. Sebastian has said he tried to find a more general theme for the song after being unable to find any reasonable rhymes for Kotter.

‘I Could Be So Good For You’ was written by Patricia Waterman and Gerard Kenny and performed by series star Dennis Waterman. The single reached number 4 in the UK charts and Waterman also performed the song on Top Of The Pops. Waterman’s proclivity for singingthe theme songs to his TV shows was famously parodied by Little Britain.

Magnum PI followed the glamorous Hawaii lifestyle of moustachioed private investigator Thomas Magnum, played by Tom Selleck. With its beautiful beach settings and flashy Ferraris, Magnum PI was the epitome of a 1980s action-drama and as such has cemented its place in the pantheon of television history.

Ian Freebairn-Smith’s jazzy original theme was replaced from episode 12 by a much more lively piece by none other than Mike Post. As with other themes by Post the theme from Magnum PI was released as a single, reaching No. 25 on the Billboard Hot 100 chart in 1982.

The Beverly Hillbillies ran from 1962 to 1971 and told the story of The Clampetts, a poor backwoods family from the Ozarks region who move to posh Beverly Hills, California after accidentally striking oil. The show was a huge hit and its enduring popularity led to a 1981 TV movie and a 1993 feature film.

‘The Ballad of Jed Clampett’ opened each episode provided viewers with the back story for the series. The song was written by Paul Henning, and recorded by legendary bluegrass musicians Lester Flatt and Earl Scruggs, with Jerry Scoggins on vocals.

Technically, the theme from the classic comedy/drama series M*A*S*H is the theme from the film it’s based on. Originally written to be performed during the movie, director Robert Altman wanted a sad yet ridiculous song as he understood he was walking a tightrope between slapstick and tragedy with the story about US army surgeons during the Korean War.

Oscar-winning composer Johnny Mandel was given the daunting task of writing a song called ‘Suicide Is Painless’ that was so bad that it was funny. But whilst Mandel soon had the maudlin music composed, he struggled with the lyrics. So Altman drafted his teenage son Michael to write the words. After an instrumental version was used for the hugely popular TV series, the song became a big hit in the UK reaching number one on the charts in 1980.

In the days before 24-hour television, there was Goodnight Kiwi, a short animation from Sam Harvey that bid viewers goodnight once the day's broadcasting ended. Each night the plucky Kiwi shut up shop at the TV station, put out the milk, and caught the lift up to sleep in a satellite dish with The Cat. For a generation of kids, Goodnight Kiwi became a much-loved symbol of staying up well past your bedtime. But why was the nocturnal national icon going to bed at night, and sharing a bed with a cat? The tune is an arrangement of Māori lullaby 'Hine e Hine'.