Dogs were a part of life on the ice in Antarctica for nearly a century until motorised vehicles and dogs' fondness for seals prompted them to be removed, as Ngā Taonga's archives recounts.

Dogs in Antarctica – Tales from the Pack is the name of a new exhibition at Canterbury Museum, all about the long history of working dogs in the Antarctic.

Sarah Johnston from Ngā Taonga Sound & Vision tells Afternoons' Jesse Mulligan that Canterbury museum has one of the world's most significant collections relating to Antarctica, and it inspired her to delve into the archives for recordings about them.

"And it's surprising, we have quite a few."

She says dogs began being used in Antarctic exploration back in the 1890s. In many cases, they saved human lives – and sadly, often paid with their own.

"The dogs ... were not just huskies, they were malamutes, there were cross-breeds of Labradors, there were some fairly exotic and - endangered now - Russian varieties.

"The description was that they liked to have dogs with quite a bit of wolf still in them: big, fairly fierce dogs - not your cuddly sort of husky that we have nowadays as pets."

However, their work was slowly replaced by motorised vehicles, there were environmental concerns about the Antarctic wildlife killed to feed them, and there were worries they could also spread disease.

The last dogs finally left Antarctica in 1994, so they were part of life on the ice for nearly 100 years. 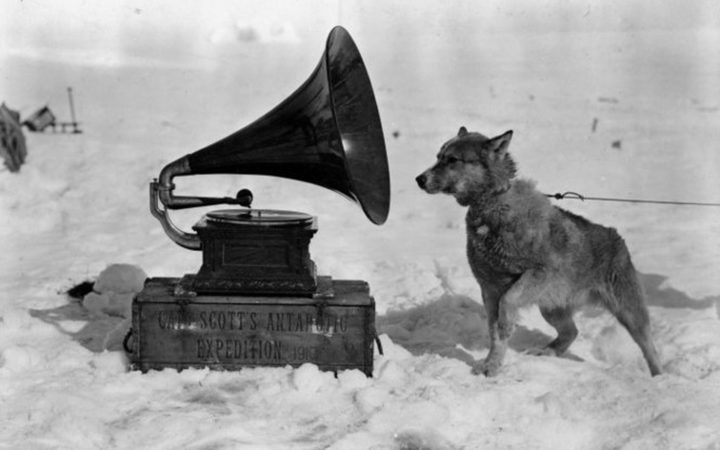 Along with his team, he managed to reach the South Pole days after his Norwegian rival Roald Amundsen, only to die in a snowstorm.

Tom Clissold was earlier a cook for the Scott expedition who later emigrated from Britain to Napier. 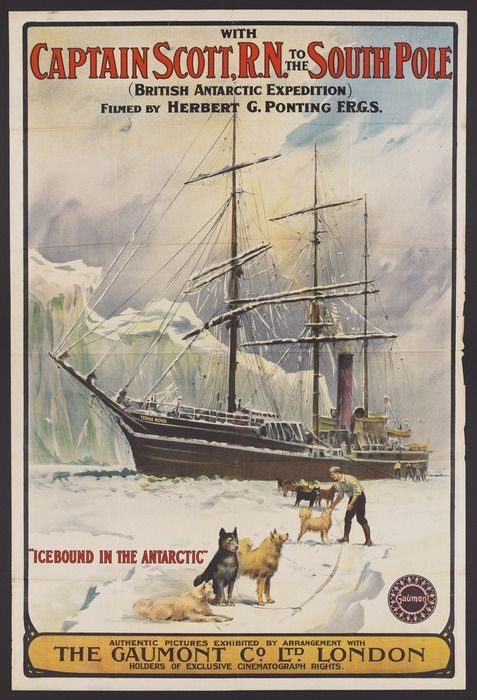 "In this first recording he’s talking about Scott’s affection for his dogs and how they were trained using Russian commands by the dog trainer Cecil Meares," Johnston says.

"He was interviewed I think about 1961 when he was obviously fairly elderly."

Tom Clissold: “[Scott had] enormous integrity … and quite a humane man as regards both men and animals.

"Of course Meares was actually in charge of the dogs, and he after picking his two teams - which were about 15 each for each team, two teams - there were rejects which he didn’t want to have anything more to do with.

"The idea was to destroy them. Well, when he told Captain Scott about this of course he asked me to take them in hand, he was rather sentimental about them being destroyed.

"So, I agreed to do this and with the aid of a leader I made up a small team of five and I had occasion to go over to Cape Royds, which was old Shackleton’s hut, to get a few necessities that was there.

"Siberian dogs, big hefty things except two we had were given to us ... and these were two that Meares rejected because they wouldn’t associate with the Russian dogs.

Another recording, from 1939, sees broadcaster Bryan O'Brien from Wellington station 2ZB - himself an Antarctic veteran - on board US Antarctic service expedition ship North Star while it was in port in the capital.

He speaks to two dog handlers Finn Ronne of Norway and Fred Dustan, whose dog Ricky - born on his bunk during the previous expedition - makes an appearance too. 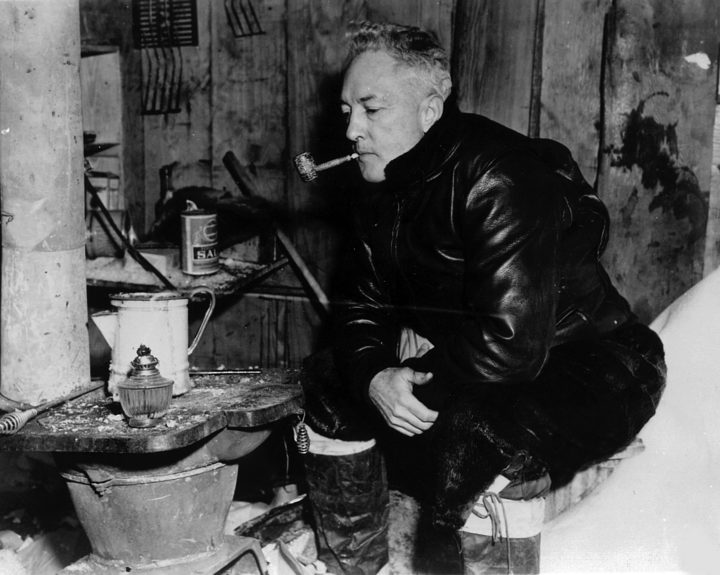 Rear Admiral Richard Byrd revisits his old hut at the site of Little America II. He is smoking 12-year old tobacco in a 12-year old corncob pipe left at the camp in 1935. This photo was taken in 1947 during the US Navy's Operation Highjump expedition. Photo: Public Domain

O'Brian: “We’re going to take a quick trip down below to say hello to the dogs. This is Finn Ronne … who is here in charge of the dogs this time.

Ronne: “Hello Brian. The dogs on board now are 64 dogs altogether. All the grown-up dogs are mostly from the northern coast of Labrador and also a number of dogs we have this time from Alaska - great Alaskan malamute dogs.

"We also have on board here 12 puppies, three of these puppies were born on the way south after we left Boston.

"We’re going to feed them specially-made pemmican that we made up before we left the States, and we expect to add on to this meat about 30 percent fat in order to withstand the rigours of the hardship out in the field.

O'Brian: “When we got down there I remember when we came to the ice we went out and shot a seal and chopped it up for them.

Ronne: "When we are in camp we always feed them seal meat. There are numerous seals in the bay … last expedition we killed hundreds of seals and fed them seal meat during the long winter nights.

O'Brian: “I’ll never forget the time we fed them seal meat, they’d been eating pemmican for months you see and they simply went mad all over the ship."

Third recording: 1986 news report - Scott Base dogs to be put down

Johnston says the dogs' diet was one main reason for them disappearing from Antarctica.

"Obviously there were environmental concerns about shooting seals and in some cases also penguins were being killed to feed the dogs.

"There was also concern about disease. Apparently studies were done by the 1980s worried that dog diseases could transfer to some of the other wildlife down there."

She says this last recording is of a Radio New Zealand news report from 1986, when it was suggested New Zealand's Scott Base dogs would be put down.

It was initially proposed that New Zealand's dogs at Scott Base would be put down.

"Obviously there was an outcry ... and eventually New Zealander Bob McKerrow, who’d worked with the dogs in Scott Base, found a home for them with an American Arctic explorer who lived in Minnesota."

"They apparently adjusted quite well to life off the ice and even learned to pee against trees ... of course, they’d never seen a tree before - they’d been raised in Antarctica."

Bob McKerrow wrote about the dogs and their fate on his blog, which also has a wealth of photos. 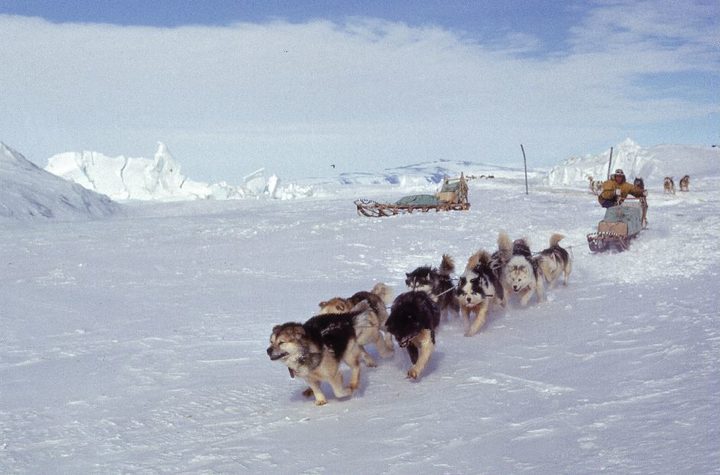 Reporter Jane Thompson: “Scott base has kept huskies for more than 25 years and at one time there were more than 70 of them on the ice.

"They’ve been a great morale booster for those people wintering over. Now, there’s a team of 16 but over the years their job has been taken over by more modern forms of transport.

"Bob Thompson says he’s been fighting for 15 years to keep the huskies at Scott base, but there’s now no alternative but to put them down.

"Mr Thompson says under the terms of the Antarctic Treaty, staff can’t keep killing seals to feed the dogs and he says bringing them back to New Zealand wouldn’t be practical.

"The RSPCA agrees. National director Neil Wells says bringing them to a warmer climate would cause the dogs tremendous suffering.

Neil Wells: "They have been bred in an environment to which they’ve become adapted and any thought of bringing them back to New Zealand would probably inflict on the dogs suffering that they just couldn’t endure.

"Particularly that breed of dog, it would suffer greatly in the more temperate climate of New Zealand.

Jane Thompson: Huskies only live for about 5 years because of the harsh environment on the ice and the Scott Base team have now become inbred.

"Three or four of the older huskies and all the pups will be put down by the end of the summer and the others within the next two years."