New Zealand had never seen a plane from overseas, so fears were high in 1928 for captain Charles Kingsford-Smith's crew when - just months after a first attempt at a crossing had vanished - the plane on its way from Sydney to Christchurch lost radio contact in a lightning storm.

The three-hour “hop over the ditch” to Australia is almost a commuter run these days, but 90 years ago a trans-Tasman flight had never taken place.

As The Press newspaper wrote on the morning of September 11, 1928, “If that is all changed to-day, the excitement will be something for which there is no New Zealand parallel".

The first successful trans-Tasman flight was piloted by Australian heroes Charles Kingsford-Smith and Charles Ulm in “The Southern Cross”, a three-engine Fokker monoplane in September 1928.

Their brave attempt followed New Zealanders George Hood and John Moncrieff, who had disappeared in an attempt to make the crossing the same year.

However, "Smithy" and Ulm had a track record - months before they already made history by island hopping the Southern Cross from California to Australia.

Their take-off from Richmond, near Sydney, was delayed several times by bad weather but finally, just after 5pm on 10 September, ‘the old bus’ (as the Southern Cross was nicknamed) began its journey, with Christchurch as its destination.

"The main airfields would have been in Auckland and in Wigram in Christchurch so I’m assuming that’s why they were going for Christchurch," Ngā Taonga's Sarah Johnston says. 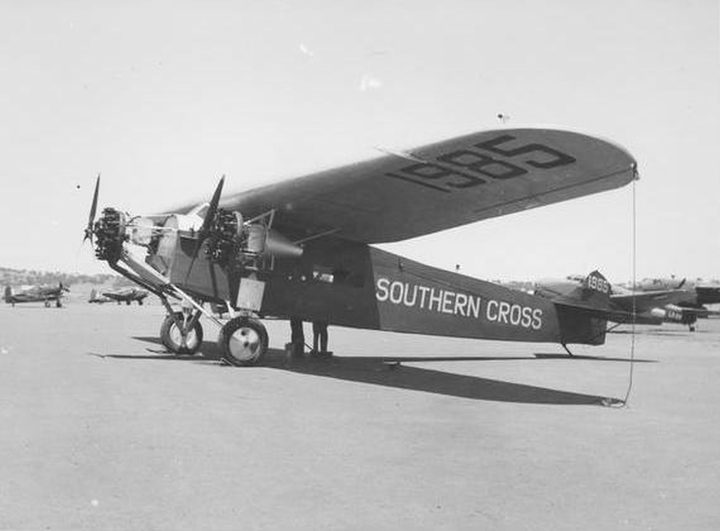 "They couldn’t fly direct from Australia over the Southern Alps as flights do today because the plane was so heavy - they had 800 gallons of fuel on board - this was a 14-hour flight."

Also on board was radio operator Tom McWilliams, a New Zealander, and communication was not easy.

"It was so loud in the plane that they couldn’t talk to each other, so they had a stick - a long bamboo stick - and they used to put notes in the end of it and pass it forwards between him [Tom McWilliams] the radio operator, and Charles Kingsford-Smith the pilot," Sarah says.

However, the plane hit a terrifying lightning storm, and lost contact.

As a radio announcer for the 1958 documentary relates, "It was just a question of playing gramophone records all night and advising that there was no news".

So, it's no surprise that the reception at Wigram Airport in Christchurch was a riotous, joyful occasion when the plane landed about 9am.

"Schools in Canterbury had been given the day off, even public servants had been given a half day, and over 30,000 people converged on the Wigram airfield," Sarah says.

"Several hours went by and everything went well and we buzzed along splendidly until about 11pm, when a long way ahead we could see flickering lightning which appeared to spread over a wide area - much too wide to fly around.

"Black clouds closed around us, riddled with vivid lightning from top to bottom. 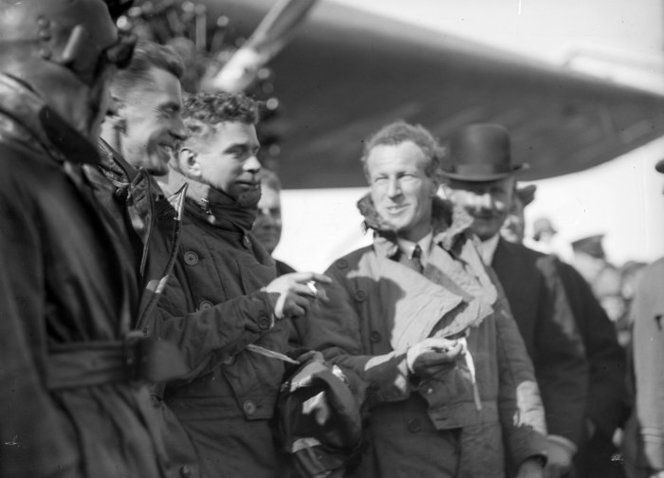 Charles Kingsford-Smith (centre) and the crew of the “Southern Cross” at Wigram, 1928. Photo: Alexander Turnbull Library

"Smithy passed a note back to me to reel in our trailing wireless aerials, however before I could do this, lightning had put our radio out of action.

"We were now getting terrific bumps with some sickening drops hundreds of feet at a time. Heavy rain beat at us from all angles, and this soon changes to driving ice.

"The fear was ever-present that the lightning might set fire to our petrol. Smithy admitted afterwards that he felt the extreme of human fear and that he felt a desire to pull her round, dive, climb - do anything to escape - but there was no escape and panic was very near.

"A little later, it appeared that the storm was abating, it was now about 3am.

"By the time the sun came up we were able to transmit messages again after hours of radio silence."

A 1958 documentary recalls the country on tenterhooks, and a fervent reception:

Clive Drummond recalls hearing the first message that came through:

“All of a sudden - out of the blue, as it were - in the headphones I heard morse signal.

"From memory, it was something like this: he gave his callsign, and said ‘height 10,000 feet, speed 90 miles an hour, flight following wind, all well.

Newspaper adverts and reports of the flight: 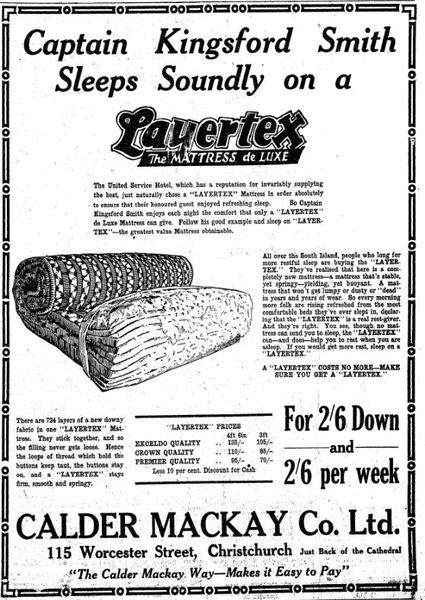 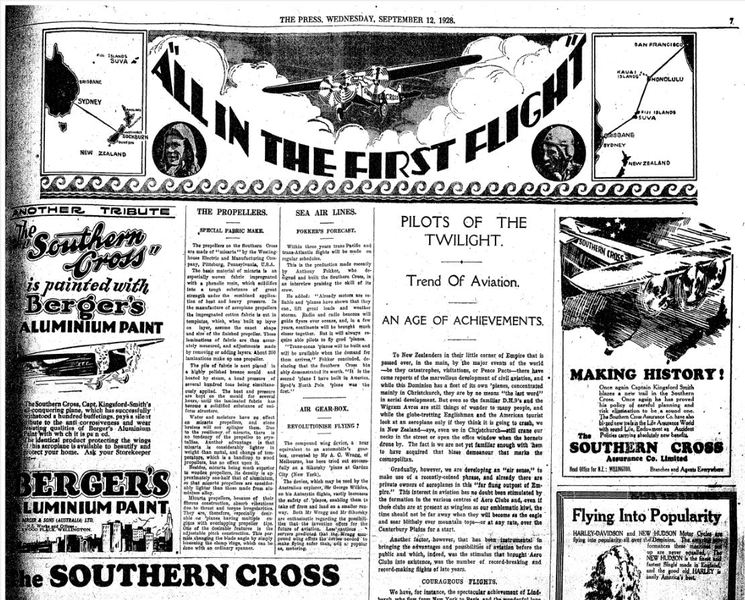 “So, that was encouraging. That gave us an extra boost to our morale and we kept having to play gramophone records.

"By the time they arrived around about half past seven, of course everybody in Wellington was out in pyjamas and night attire and top coats and various things and gowns, gazing up into the sky to get their first glimpse of the southern cross after its crossing at the Tasman.

Jessie Pollard talks of the exciting atmosphere at Wigram airport in Christchurch:

"It was a ... beautifully fine spring morning, sun shining and all the hedges - the gorse hedges - shining yellow in the early morning sunlight.

"Out we came and sat around patiently in the middle of all these gorse hedges and waited - buzzes of conversation and sandwiches and thermoses - and at last we saw a plane coming. 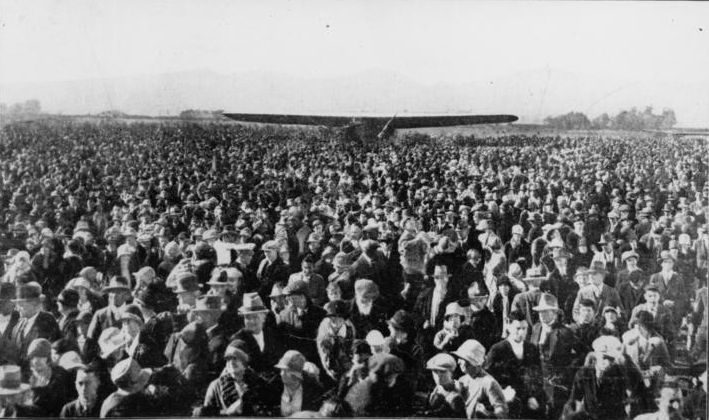 "The great moment arrived when the plane touched down and Smithy, as we called him, came out. The national hero of the moment."

Christchurch journalist Baxter O'Neil recalls the bustle of Christchurch ahead of the landing:

"By 8 o'clock in the morning it seemed to me the entire population of Christchurch was streaming up Riccarton Road and we guessed afterwards there were 5000 cars at Wigram by the time the Southern Cross came over.

"We thought she was a huge machine, but she was a toy by1958 standards.

"When she touched down the crowd just broke up into a chaotic cheering mob and that was the end of the control.

"The crew had to struggle through that mob into the sanctuary of the hangar and even there were the official welcoming parties augmented by all sorts of people who shouldn’t have been there at all.

Columnist Mac Vincent remembers the plane and the man - Kingsford-Smith: 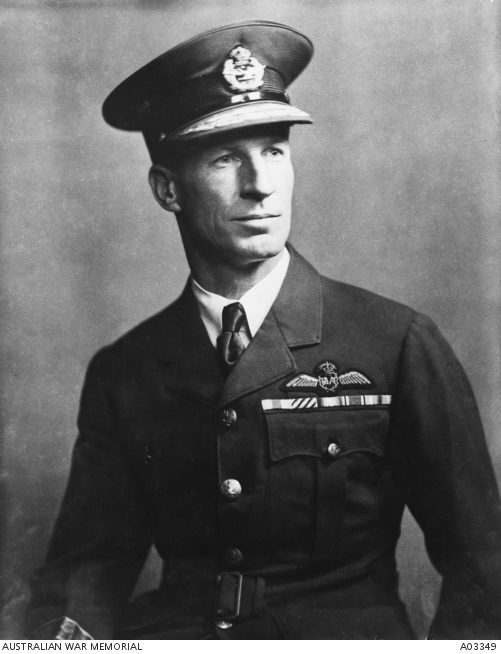 "When she first appeared I was thrilled, of course, but I was mostly astonished - astonished at her size, greater than any plane I’d ever seen.

"She glistened in silver and blue in the morning sun, but when she caught the shadow she seemed to hang overhead like a great beetle.

"When he spoke with his flat Australian voice in nonchalant phrases, he was irresistable. Of course, Smithy had a touch of the showman: with a crowd he was just a natural.

"I will always remember my brief encounters with Smithy and Ulm. They were pioneer air explorers and the life imparted something to them. It seemed to make them more than life size.