Jana says the documentary about British rapper/singer/songwriter Mathangi Arulpragasam, better known by her stage name M.I.A., is a must-see.

"She’s got a really interesting background, going along to these documentaries completely opens your world to what you’ve been listening to.

"She is from Sri Lanka, she immigrated to the UK when she was about 10 years old in the '90s, her father was actually the founder of the Tamil Tigers, the resistance."

She says the family had to flee because of it. Mathangi grew up in London and went to to St Martins art school hoping to be an artist.

"There’s a lot of behind the scenes footage and early days of MIA doing art stuff.

Jana says a lot of M.I.A.'s music is influenced by her background,

"There’s a lot of interesting sounds in not normal Western music.

She says a highlight is when M.I.A. and Nicki Minaj performed with Madonna at the NFL Superbowl.

"Later on it turns out that there’s a multi-million dollar lawsuit against MIA for doing that, for pulling the fingers on a live broadcast."

Jana says the documentary about The Velvet Underground singer Nico was a biopic, rather than a documentary.

"It was quite hard to really get into it - for me anyway - I found the actress didn’t really resemble Nico at all.

She learned a lot about her, however.

"Other than that she had a bad heroin habit and as in the Velvet Underground and that whole Andy Warhol scene I didn’t know much about her.

"This movie enlightened me to the fact that she had a son, that one of her biggest life regrets was not being an adequate mother to raise her son, so her son was actually raised by the father’s parents."

Jana's song pick: My Only Child

"This best moment in this film was her singing 'My Only Child', it was just zoomed in on her face and then slowly panned out to the band playing a more contemporary arrangement of My Only Child."

She says the film is set in the 1980s -  20 years after Nico was in The Velvet Underground.

Miss Sharon Jones, is a documentary about the contemporary soul music singer known as the Queen of Funk.

"She’s incredible, you know, people refer to her as the female James Brown."

She says the film starts in a barbershop, where Jones is having her head shaved.

"It turns out that through the whole film she’s getting therapy for cancer, she has pancreatic cancer."

She says the song 'Retreat' in the film offers an offbeat moment.

"She’s at the doctor’s appointment with her friend and she’s just showing her the new video for the song ... the friend points out there’s all these black characters … around Sharon, dancing, and she’s like ‘is that your cancer?’.

"I guess they started filming when they found out about this and went ‘let’s make a documentary about this’.

"The film ends with her on stage going crazy and dancing around on the stage, like James Brown."

Despite the film's happy ending however, Jones did die from her cancer in 2016.

Jana says the Amy Winehouse doco was one of the saddest things she's ever seen, but absolutely worth seeing.

"It’s so depressing, what an absolute missed opportunity, waste of talent ... I couldn’t believe how depressed I was at the end of it.

Jana's song pick: Back to Black

"I always remember the scene when she’s recording 'Back to Black' with Mark Ronson.

"They’re just in a small, looks like a pretty DIY recording studio and he’s just recording 'Back to Black' and she apparently wrote it in a couple of hours, the whole lyrics, the melody, everything.

She says the scene offers a stark contrast to how Winehouse is at the end of the film.

"It opens with her as a beautiful full-of-life and energy 14-year-old singing 'Happy Birthday' in the style of Marilyn Monroe with her friends. 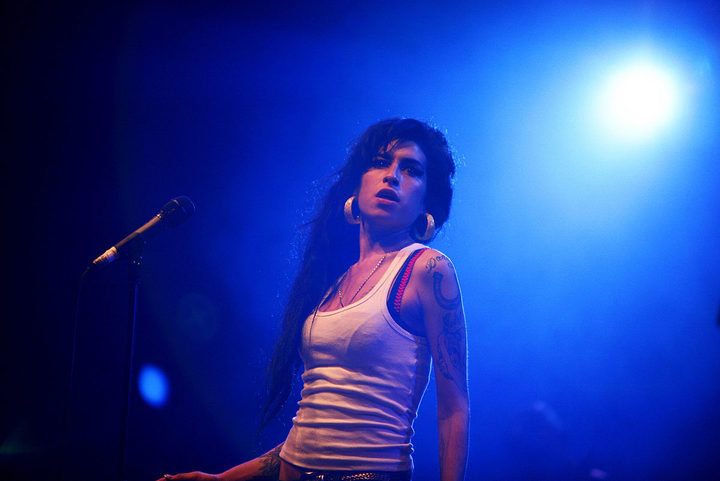 "It’s hilarious because she starts singing it with her friends and they just drop back because she’s so incredible they’re like ‘Okay I’m just going to shut up and let her sing it’.

"She’s just completely taken by fame and people just taking over her life like her father and her manager. They just make her perform when she’s clearly not well enough to perform."

The story of Bikini Kill singer Kathleen Hanna also involves sickness, but it has much more of a focus on the riot grrrl movement.

"There are lots of appearances by Kim Gordon, and lots of female musicians from back in the day - the Go Gos, Joan Jett.

"Riot grrrl was a movement that came out of the music scene in Olympia ... apparently it came from when Kathleen Hanna and one of her friends were talking about there’d been a mass murder at one of the universities, 14 women were killed.

"The gunman was just looking for women to kill, it was a … horrible misogynist attack, and so they said we need to start a girl riot, and so that’s where the name came from."

Jana says the most mainstream link to the riot grrl movement is probably Kurt Cobain.

"She was the one who wrote on Kurt’s wall, on Kurt Cobain’s bedroom wall ‘Kurt Cobain smells like teen spirit’.

"He was a real feminist in that movement ... became the singer of Nirvana and got to fame but he always had that connection to those bands in Olympia.

She says Hanna is married to Adrock from the Beastie Boys.

"She struggled with that as well, she’s like I’m this feminist riot girl punk singer and I’m married to this guy that’s saying ‘girls girls girls’.

But Hanna's story, like Jones', also turned to sickness.

"She actually gained Lupus disease which is a pretty full on autoimmune disease and during the filming of that documentary that’s when she found out about it.

"The lupus sort of took over and she had to quit Le Tigre, which was her second band after Bikini Kill, and she started the Julie Ruin around 2010."

Jana loves Patti Smith, but says the 2008 film of the same name could be a slow burn for those who are not die-hard fans.

"I could watch her do anything and be completely enthralled by it.

"It starts off with her in her New York City apartment which is very minimal. Like, there’s a mattress on the floor - that’s her bed -  there’s one table, there’s a guitar, there’s a cat. That’s it."

She says Smith - who, at 71, is still occasionally performing with her most recent show in Detroit last year - saw a lot of death in her life which drove some of her music and art.

"Robert Maplethorpe was one of her good friends and romantic partners for a while, he sadly passed of AIDS and then she was married to Fred 'Sonic' Smith from the MC5 another great rock ‘n’ roll band and then he’s sadly passed, her brother passed."

Jana's pick for a song was from the only album Smith recorded with her husband Fred.

She says the film has some quirky aspects to it, and takes a deep dive into Smith's love of art.

"Her obsession with all the great artists and poets, she’s another one who wanted to be an artist, not a singer, but ... art and poetry was how she found her voice.

"This film actually played at the Outtakes queer film festival, which is no longer a thing which is really sad for the queer community.

"Once again there’s drugs, there’s addiction, there’s death - obviously the death of Kurt [Cobain], which was a huge impact on her."

She says Schemel was close to Cobain, much closer than Hanna had been, and was basically the nanny to Cobain and Love's daughter.

"He was the one who introduced Patti to Courtney Love and said ‘hey, you’re looking for a drummer, my friend Patti plays drums.

She says Schemel ended up being kicked out of the band in an awful, bizarre way.

"One of the producers they’d got in to do Celebrity Skin, the more commercial album, he basically said she couldn’t play the drums and said she needed to go."

"They didn’t actually make a big deal of her leaving the band, they didn’t make it public, they even got a woman who looked like her to be in videos.

"They got in some guy to come in and play the tracks … he’s not credited on the album at all.

It had a profound effect on Schemel.

"After she’d been clean for a while, doing the Celebrity Skin album, she ended up going back into drug abuse and heroin, in a dark hole.

In perhaps a bucking of the trend however, things have turned around for Schemel since then.

"She has been clean since the early 2000s and she’s currently working with youth like the girls' rock camp… she’s got a new band called Upset."