Pātea was once the world's largest cheese-shipping port, sending 20,000 tonnes a year to the UK in 1950, but just 20 years later the country had to fight to protect that trade as Britain ‘Brentered’ negotiations with Europe.

With Brexit now threatening to break UK ties to the EU, New Zealand is again looking to keep itself secure from financial ruin but this time with relative independence from Britain.

In today's visit to Ngā Taonga Sound & Vision's archives, we are diving deep into New Zealand's history of cheese.

The archives' Sarah Johnson tells Afternoons' Jesse Mulligan that in 1971 when Britain joined the EEC - the European Economic Community, as the EU was once called - the safeguards for New Zealand industries were a huge relief and victory for the country. 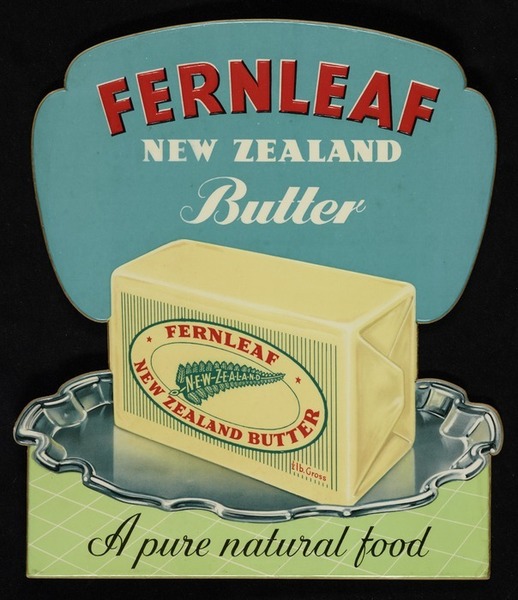 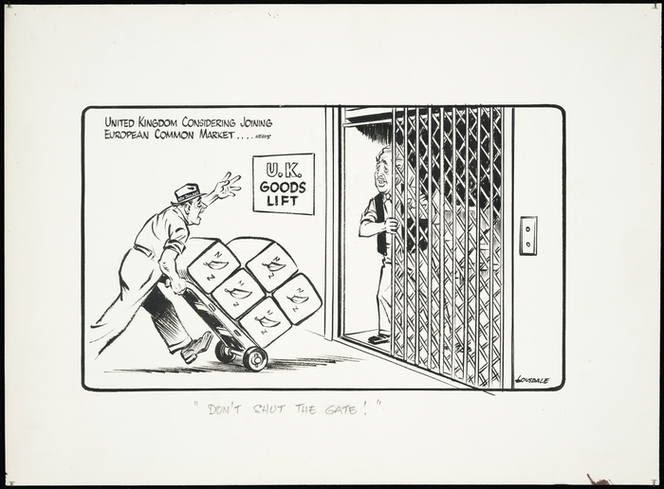 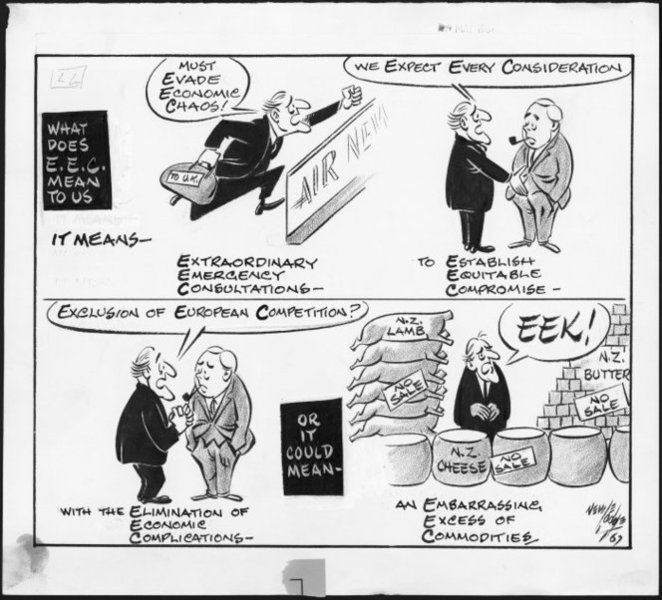 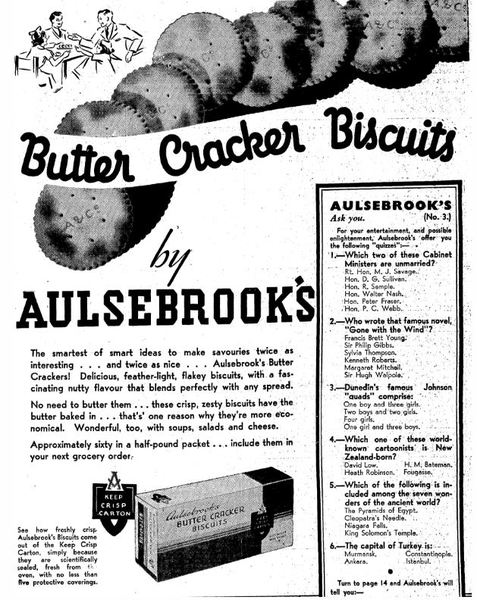 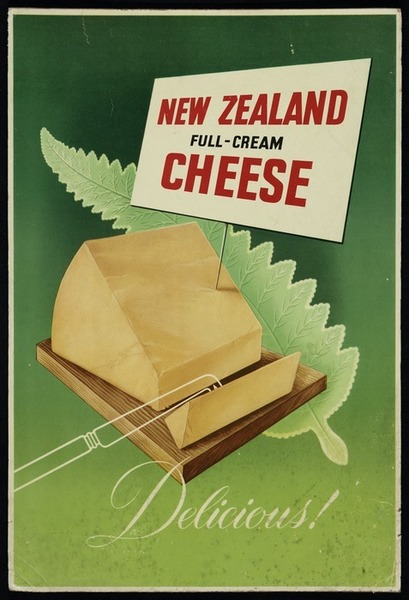 A news report from 1971 that our economy had been saved from financial ruin after Britain joined the European Economic Community ...

“The reasons for the agreement ever coming about - and it’s against the predictions of many diehard critics of Britain ever bothering about New Zealand - must lie in the roots of Jack Marshall’s first trip to Britain in 1961.

“Duncan Sands brought the news to New Zealand and gave attractive assurances that Britain would not enter unless the conditions were right for New Zealand’s entry.

“New Zealand decided that she could only accept and even encourage British entry, what else could she do - 53 percent of exports went to the United Kingdom.

”In 1967 the New Zealand government decided to restrict its requests for specific safeguards to butter, cheese and lamb.

“It was with the 1967 British application - the first concrete decision to join and not just negotiate - that New Zealand became fully aware of the feeling on both sides of the house in Britain.

“The Holyoake government opened embassies in Bonn and Rome, adding to the two in Brussels and Paris.

“Today, on his 11th tour of Europe, Mr Marshall has found agreement.”

Cheese shipping - from inland Pātea to Britain via Wellington

Part of broadcaster Jim Henderson’s mid-1950s series on New Zealand’s coastal shipping trade took listeners to Pātea, where cheese from around South Taranaki was shipped to Wellington for export to the world ...

“The bus dumped us in Pātea and I’ve never been there before, and the big, long, main street looked just like one of those Russell Clark drawings of an NZ town.

“A Māori woman with a calm, peaceful face, she walked past and her baby slung over her back. Māori and Pākehā children were swarming and fighting over the wreck of an old motorcar in the fennel and the grass of an overgrown section.

“A taxi took me off about a mile south to the Taranaki Shipping Company on the Pātea river, the firm’s ships - the Inaha, the Tiroa, the Foxton -they tie up close by about a mile inland.

“Every year their three ships carry over 20,000 tonnes of Taranaki cheese down to WellIngton. That’s four times more than all the cheese we eat every year in New Zealand.

“This cheese comes from factories from all over South Taranaki.

“Pātea shipping company has been going since 1912 … I learned the firm has 29 sailors and then we got talking about wages.

“Rather surprising this, as with most shipping companies roughly 60 percent of your effort goes out in wages, from teleclerks on the wharves to agents to sailors and so on.  It costs about 140 pounds to keep a sailor in food for a year.

“Yes, I was told the food is the best, like hotel food, and so it should be.

“I went back to Pātea for a good big steak. As I went into the restaurant, I looked back. The sun was setting like a great big cheese over Taranaki.”

Other than Chesdale cheese’s famous jingle, there are few examples of cheese or butter adverts from New Zealand, but Aunt Daisy did have something to say about Aulsebrook’s Butter Crackers … 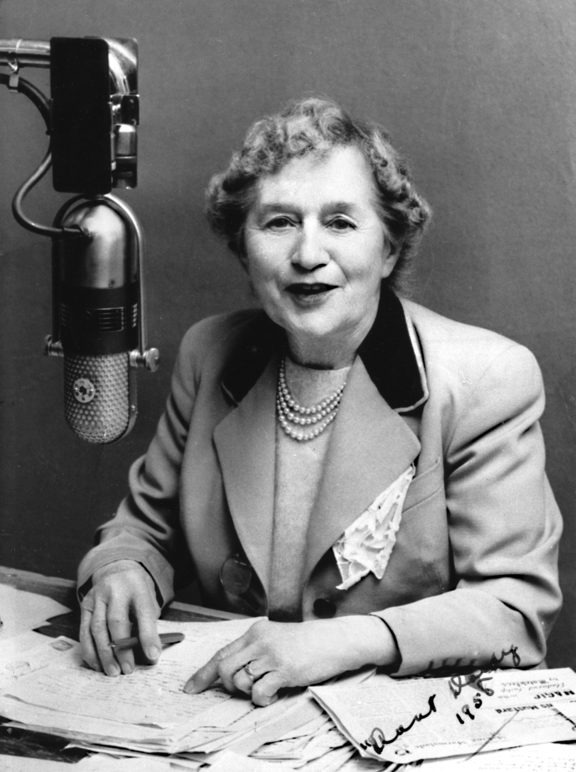 “I’ve been waiting to tell you about it until I could get the time for it because I’ve been eating these for some time now, I’m very keen on these, it’s a most tasty, lovely thing, have you had them? I suppose you’ve all had them by now.

“Have you had those lovely little things, aren’t they tiny! They’re so dainty!”

“Of course, you know that Aulsebrook’s, one of our very old firms - I wonder how it is that some of our very old good firms have always lived in Christchurch ... 1863 they started … that’s good you know?”

“I tell you what’s lovely on those butter crackers too, and that’s a slight little bit of butter and a bit of chutney - I’m talking a beetroot chutney - but any chutney.

“Well, that’s the Aulsebrook’s butter crackers and they are so extremely nice.”