The distinctive national symbol, the cabbage tree, still fighting back from the ‘sudden decline’ disease, is one of the most widely cultivated trees in New Zealand.

Botanist Philip Simpson, author of Dancing Leaves: The story of New Zealand's cabbage tree, tī kōuka is an enthusiast. He calls it a tree lily – similar in anatomy to the lily, though growing to several metres with a distinct trunk, like other trees around the world, notably the yucca in the United States or the aloe from Africa. 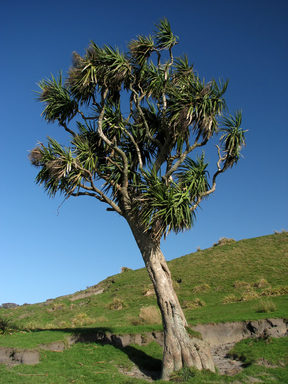 “They are trees of a different nature - they are a fleshy-wooded tree, and usually with long fleshy or fibrous leaves.”

Each one has several underground stems to a depth of a couple of metres, and are like thick pegs, from which strong cord-like roots radiate horizontally.

“The chances of a cabbage tree being bowled over by wind is exceedingly remote. Far more likely it will split.”

Though they’re primarily a wetland plant, cabbage trees are capable of storing water in their fleshy wood, so they‘re drought resistant enough to grow in dry areas too.

The leaves contain chemicals such as terpenes which make them flammable. “In colonial days they were collected and used as fire-starters.”

Fleshy berries produced in the thousands ripen gradually over a period of weeks, attracting keruru and other birds day after day.

They can self seed and thrive in situations where they’d never be planted - such as edges of houses and corners of pathways – and can lift concrete.

For all their sturdiness, the trees are still dying from the disease called ‘sudden decline’ which appeared in the late 1980s.

“All through the country there are cabbage trees dying – the disease is still there.”

Since its peak in the 1990s the power of the disease has declined, he says, and trees have sometimes regrown from the base. But there’s no apparent resistance being developed.

The disease is caused by a bacterium native to New Zealand, transferred from tree to tree by an introduced sap-sucking insect, the passion vine hopper.

Simpson says it got out of control because the tree grew so successfully outside its natural habitat. In the wetlands, the insect which spread the bacterium had been kept under control by fluctuating water levels.

“In a terrible sort of way, the human love of cabbage trees caused their demise.

“The most common deaths are in places that are not natural – such as street trees, people’s gardens and isolated trees in paddocks.

“If you go in the same regions into the natural wetlands you will find that most of the cabbage trees there are in perfectly healthy condition.”

“The message is, let’s enhance the cabbage tree population where they really want to grow.”

Simpson suspects a warming climate will intensify the disease. It started in Northland and reached to the mid-South Island, he says, but to his knowledge hasn’t extended to the cool temperate zone of New Zealand.

“But I wouldn’t mind betting that with climate change, climate warming, the disease will become even more intense.”

The tree was named by Captain Cook who used the growing heads as fresh food for crews to prevent scurvy. Simpson says it’s an interesting taste: “I wouldn’t call it delicious.”