Unlocking the secret of the glowworm’s shine

Scientists have discovered what makes New Zealand glowworms light up and hope the knowledge will eventually lead to new ways of fighting disease. 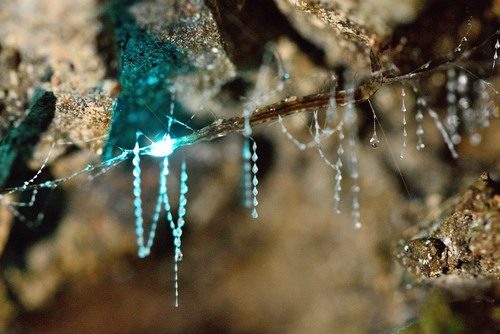 The study has been published in online science journal, Scientific Reports.

Light made by living creatures comes from chemical reactions that take place in enzymes called luciferases.

Dr Miriam Sharpe, a lead author, says fireflies, from the northern hemisphere, are technically a kind of beetle and they’ve independently evolved the ability to make light.

Glowworms, though, are a larval form of the fungus gnat – a type of fly – making them a “glowing maggot”, Sharpe says.

They’re carnivorous and produce light to attract prey, sending down sticky “fishing lines” with lights at the end to entangle their prey

The protein part of the reaction in fireflies and glowworms are similar, Dr Sharpe says, but in the glowworm it works with a different chemical, called luciferin.

Sharpe says the chemistry behind the fireflies’ glow is already used in biomedical research such as in DNA sequencing, or to track the presence of tiny organisms including microbes.

“For example, you can tag a bacterium or cancer cell with the luciferase, and use the light to track how disease spreads in the body.

“Or you can tag individual genes with luciferase, so you can see exactly where and when those genes turn on in the cell.”

“We’re hoping that the glowworm system, because it’s different chemically, will have similar but slightly different applications.

“That would be useful.”

To identify the chemicals, the University of Otago researchers harvested light-producing organs from glowworms.

The next part of the research is to make the molecules artificially, Dr Sharpe says.

“We’re very interested in glowworms not being harmed any more than we have to, and keeping the population up.”