Keen runner Matt Akehurst has set himself a challenge; he’s picking up 7000 pieces of litter in 70 days. 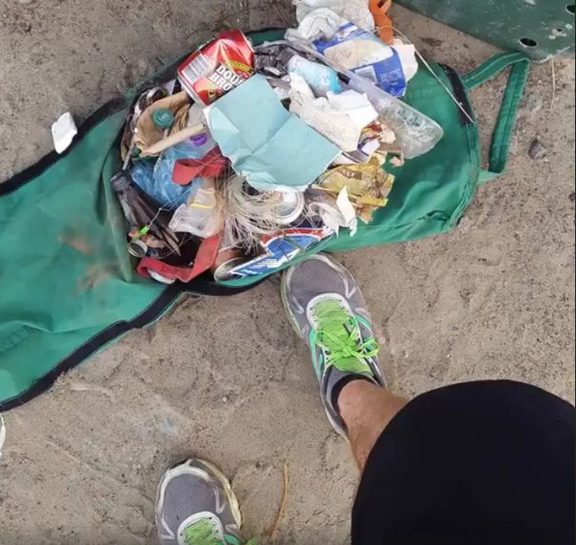 He’d already been in the habit of picking up a few bits of rubbish as he went for a run.

“I thought I’d just challenge myself a bit this time – I’m not sure how I came up with the number.”

It’s known as plogging, though Akehurst doesn’t like the word, apparently a combination of jogging and the Swedish plocka upp, to pick up.

“It just sounds weird,” he says.

It’s a fitness trend that’s supposed to give the runner extra exercise with all the bending and lunging to retrieve rubbish along the way.

At 25 days, Akehurst had amassed 4500 bits of rubbish – well ahead of his target but slightly dispiriting all the same.

“Visually, it’s kind of disgusting. And every day you when you go out, it gets replaced the next day.

“I just try and think of the bird or the fish that’s not going to eat the piece I pick up.”

He trains for races and does a daily 4km warm-up circuit at Pines Beach, near Kaiapoi and north of the Waimakariri River, in Canterbury.

He found a $20 note along the way the other day, but it’s usually plastic bags, bottles, odd jandals, straws and shotgun wadding left behind by duck shooters.

“It’s slowly getting cleaner - but then maybe the king tide will come along and bring it all up again or the water from the river will flush out a lot of stuff that’s upstream.”

Akehurst posts daily photos of his collection on his Rubbish Runnder Facebook page. He wants other people to see how much rubbish there is and what’s ending up in the ocean.

“I don’t know if there’s any outcome to my little attempt at being an environmentalist but it’s nice to do.” He says he’ll keep at it if he gets more likes on Facebook.

With a number of Pacific countries banning plastic bags in response to plastic litter pollution in the ocean, Samoa continues to face a dilemma on how to manage their waste. Audio

NZers are sending more waste to the dump. Teresa Cowie asks why and explores whether there are bigger,undetected issues Video, Audio