The British arm of Kellogg's is reducing the sugar content of its three top-selling cereals targeted at kids, but the company's New Zealand arm has no such plans. Many popular cereals are simply far too sugary, food writer and healthy food campaigner, Niki Bezzant says. 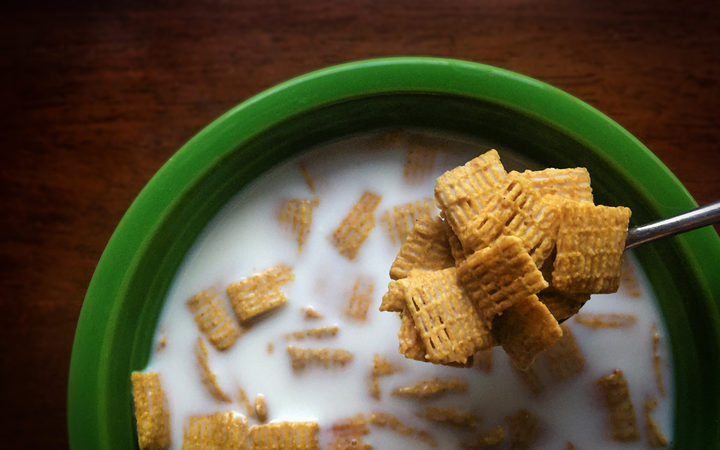 Kellogg's UK says it recognises people are eating too much sugar at breakfast, so will reduce the amount of sugar in Coco Pops, Rice Krispies and Rice Krispie Multigrain Shapes by 20 - 40 percent.

In NZ, Kellogg's reformulated Nutri-Grain with less sugar when the Health Star Rating system came out in 2015 so it would get a better star rating.

You might be able to argue Cocoa Pops – which is 36.5 percent sugar – is better than nothing for breakfast, but it's not going to give your body much to go on, Bezzant says.

"It's refined carbs and sugar, they've chucked a few vitamins in there but you're not even getting any fibre, really. The best thing about it would be the milk."

Even if a cereal looks healthy on the front of the pack, check its sugar content in the 'per 100 grams column' on the back, she says.

"These things are the same as any other sugar – and if they're in there, look at the sugar amount in the 'per 100 grams' column."

When it comes to sugar per 100 grams, the lower the better, Bezzant says, but if you can, go for 15 grams or less.

Weet-Bix is a good low-sugar option with 2.8 grams of sugar per 100 grams and making homemade muesli or bircher muesli can be a good way to control the sugar content.

Research shows people who eat breakfast are healthier and the right breakfast can give you a headstart on your daily nutrition, she says.

"A bit of grainy toast and an egg is a really good breaky."