The history of NZ statues 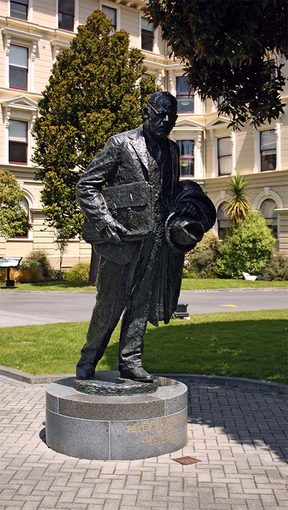 An Auckland memorial to the NZ Wars has specifically come under criticism. This follows anger debate in other countries over the removal of memorials or statues with controversial histories.

Grant Morris from Victoria University looks at some of our statues of famous New Zealand historical figures.

Our statues in strife:
George Grey statue (Auckland), Calls for the statue to be removed due to Grey's invasion of the Waikato in 1863
John Ballance statue (Motua Gardens, Whanganui) Had its head knocked off during the 1995 protests due to Ballance Government's purchase of Maori land in the 1890s
Captain Cook (Gisborne), colonial imperialist?  Painted red on numerous occasions due to Cook's role in colonialism.


We got a lot of feedback after this interview from people sharing their favourite and not so favourite statues, including Robert Falcon Scott in Worcester St which is currently being quake repaired and will be unveiled on October 6th, Our Lady of Lourdes in Paraparaumu, Wellington and Pania of the reef in Napier

Not nearly enough statues of women in NZ.

Hi Jesse, a bit of a statue project going on here in Invercargill.  To go with the statue of Bert Munro, of World’s Fastest Indian fame, We’re doing a bronze statue of Alex Lithgow, the man who wrote the popular Invercargill March.

@JMulliganRNZ So many statues for men being listed! - Here's a petition for a 'plaque' for a Woman - https://t.co/zFiZq7fzyQ

@JMulliganRNZ Statue of Richard Seddon who helped defeat the woman’s suffrage of 1879 say “..if you give too much power you unsex woman” Ha! pic.twitter.com/8apIHNo6Py