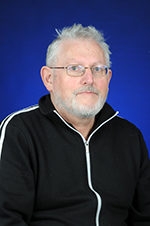 Professor Geoff Lealand is about to retire from Waikato University after 25 years teaching screen and media studies.  This probably makes him the most qualified Bookmarks guest to talk about his favourite movies and tv series.

Dr Lealand's leaving Waikato University later this year as a casualty of an ongoing issue for many academic institutions which are culling arts faculties in favour of science, technology, engineering and math subjects.